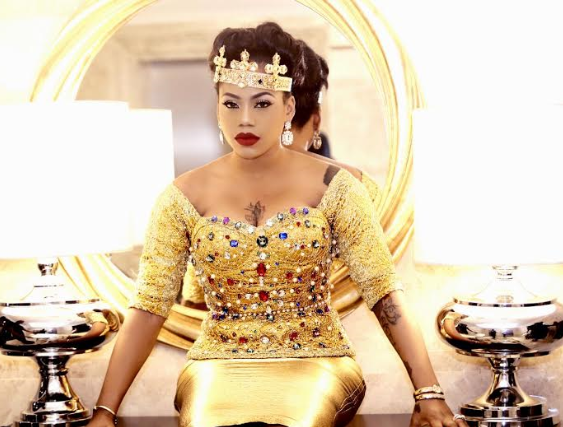 Toyin Lawani is one of the most sought after celebrity stylist in Nigeria who started her career at a very young age. When she was only sixteen years old, she launched her first boutique.

However, despite a thriving career, her personal life has been full of ups and downs. According to reports, she was once married but the union crashed after a few years. Years later, she fell in love with a younger guy but the relationship which produced a charming little boy, hit the rocks.

There is not much information about Toyin’s ex-husband as the versatile beauty and fashion entrepreneur, has never talked much about this first love of hers that produced her first child, Tiannah.

However, in a recent post she shared via Instagram, Toyin who is the CEO of The Tiannah’s Place Empire briefly spoke about how the marriage crashed.

Toyin, who had her 1st child when she was 23 years old and got married at age 19, narrated how a friend of hers influenced her to divorce her husband who was abusing her at the time they were married.

According to the doting mom, her friend sent her a message which she still has, mocking her that she was in an abusive relationship & showing off that she had a better husband which made her (Toyin) take her child and walked away from the relationship.

The hard working businesswoman further revealed that the friend who advised her to leave her marriage was also suffering the same abuse in her own marriage but remained has remained in it till date.

Toyin also took time to hit back at those mocking her for having two kids from different fathers, saying she did not choose her situation but it choose her.

In her lengthy post, the stylish mom also made a case for single moms, saying no woman goes through what single mothers go through. She however advised them to be careful about the things they post about their baby daddies on the internet.

READ ALSO: Toyin Lawani Shares Her Story About Being Pregnant For A Younger Man

“When U are Different The world will hate on you for no Reason. When they don’t understand your life choices or theories, they will castigate you & everything you stand for. The women that go through the most in life Are single moms.

They are Blamed for their choice of not being married or in a man’s house, they take care of their kids day in day out pushing them to greater heights without uttering any complain & still let the fathers play their Role in the child’s life.

They struggle day in day out to Give the people around them joy & happiness, even plus how hard they work, so when you want to blame a woman for being single or having kids with two different men, think twice cause it can happen to anybody, either by death or by pain.

Twitter User, John Doe Gives Reasons Why Married Women Should Not Leave Their Marriages On Grounds Of Infidelity

At times we don’t choose our situations, At times our situation choose us. A long time ago, a friend sent me a message which I still have, mocking me that I was in an abusive relationship & showing off to me that she had a better husband than me.

I took my kid & walked away from the relationship, said nothing to the public & focused on my biz & kids, till date, little did we know that the husband beat her up everyday & she faked all her riches.

Now today my baby daddy Helps with my sons bills & act like a better dad, why I’m I saying this?All that glitters are not gold. At times we make future decisions for our kids by not fighting a bad situation with a bad situation, for the sake of our kids, because the truth is the internet never forgets, they will grow up & read all y’all silly negative write ups on their dads.

Two wrongs don’t make a right & hate can’t birth happiness. When people mock me that I have two kids from different dads, I laugh so hard because my dear it will be your bestie, your friend, your sister, your mother, your aunty tomorrow, just make sure that they have their second baby with the first father of their child ok.

I had my first kid when I was 23 years old. I got married when I was 19 years old, there are many things y’all don’t know about me. I have been through hell & back with no complains or pity party, so if U want to judge my life choices make sure you are perfect first.” 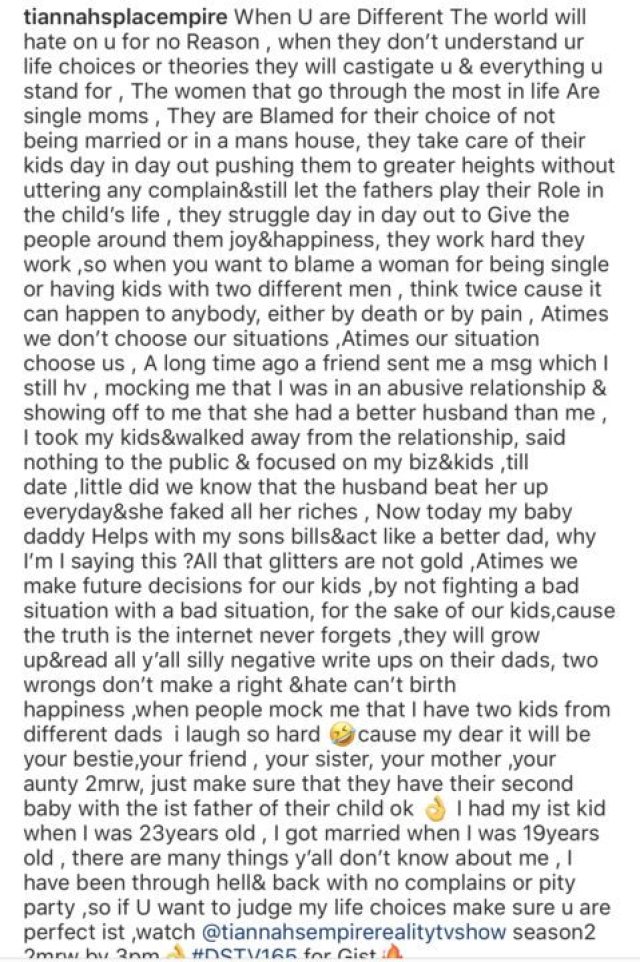