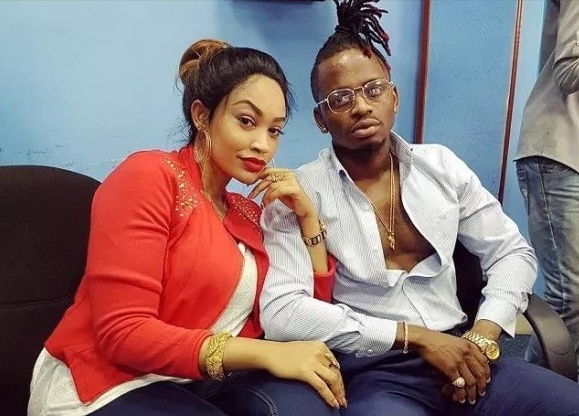 Nasibu Abdul Jumma, aka Diamond Platnumz who is a popular East African musician has ignited an online feud with his Ugandan baby mama and ex-partner Zari Hassan after he claimed she was a cheater, just like him, which was one of reasons for their split.

In an interview with Wasafi TV on Tuesday, the Tanzanian music sensation dropped a huge bomb that Zari cheated on him with married Nigerian superstar, Peter Okoye of the former P-Square duo as well as her Kenyan gym instructor while they were in a relationship.

The Bongo musician added that the mother of his two children would bring the two men to their matrimonial home on alternative dates and bed them. He stated:

“Zari Hassan was dating P-Square’s Peter [Okoye] a few months before she and I got our first baby, Latiffah Dangote. I read [love] messages that she and Peter sent each other via mobile phone. I even confronted her.

In his words, he said that he forgave Zari for the affairs which he knew about, because he was also moving out in the relationship.

The singer revealed that the cause of the rift between the two was majorly the distance that forced him to become unfaithful as he needed a companion and that video call was not enough. Diamond said:

“Zari refused to relocate to Tanzania where we could be close to each other. As a young man, who is a superstar; and my sexual urge is still high, there was no way I could stay for close to three months without being intimate with someone.”

Diamond even referenced his much publicised cheating scandal with baby mama, Hamisa Mobetto. According to him, he cheated on Zari with Hamisa in revenge. He continued:

“I was ready to put up a business for Zari in Tanzania, but she completely declined to relocate from South Africa.

What were you expecting me to do; especially with all the attention I am getting from women, given my superstar status? I wanted her to walk out of my life without necessarily asking her to.”

The dad-of-four went on to reveal that Zari no longer allows him to bond with his children, son Nylan and daughter Latiffah Dangote. He also admitted that he had not paid child support for his children who lived in South Africa for a few months as he felt that Zari was using the children to hurt him by denying him access.

He said that the mother of five who blocked him from social media had refused to give him a contact person for the children and yet she would not pick his calls.

Diamond alleges that his children were to visit him in Tanzania during school holidays but their mother gave conditions which he was not comfortable with.

The popular singer said that he would wish that all his kids expenses were paid directly and not given to Zari personally. He however said that his mother, Sanura was still in communication with the children.

He also revealed that all his troubles with Zari started when he announced and seemed to be in a serious relationship with Kenyan radio presenter, Tanasha Donna Oketch.

The singer added that he has been sending Zari monthly upkeep of USD 2,000 (Sh200,000) save for the last three months or so that he stopped after things got a little bit frosty.

The estranged pair dated for four years after Diamond dumped her previous ex Wema Sepetu. They split on February 14 last year, after Diamond revealed on radio he had cheated on her with socialite Hamisa Mobetto and ended up having a son.

However, Zari took to Instagram to refute the claims made by the singer, saying that Diamond was chasing clout for his new single using her name. In the videos that have since been deleted, Zari said that the singer should not be trusted as he at one time denied his own son whom he sired with video vixen Hamisa Mobetto.

She said that he had not contacted his children from October 2018 and that he was not involved emotionally or financially in their lives.

The Ugandan entrepreneur who lives in South Africa said that she would not let her children to travel alone to Tanzania. She said that both their lawyers were in contact to ensure a proper parental plan for the two children.

Here is the Video by Diamond in his local language, Kiswahili: