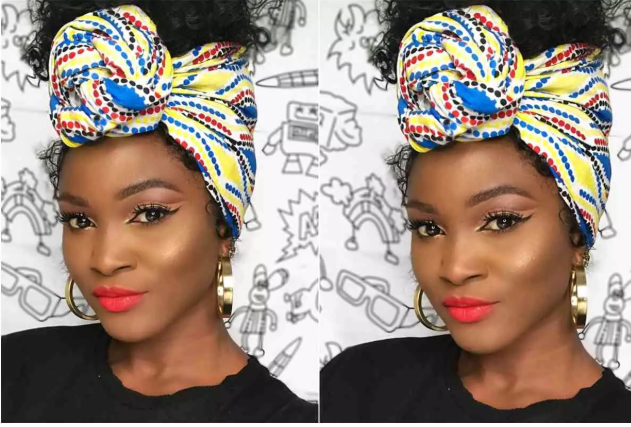 Nigerian Girl, Arike Ade, Is Trending For Humourously Holding Her Own Against An Entitled Man

Beautiful young Nigerian rapper, Eva Alordiah has bared her mind on the issue of child bearing and how she may consider the option of being a single mother or adopting a child.

Eva disclosed this in the comment section of Ghanaian screen diva Juliet Ibrahim‘s post. Recall we reported earlier how Juliet who is also a single mother, made a case for single mothers via her Instagram post.

In the post, the stunning actress who split from ex-husband, Kwadwo Safo Jnr. in 2014 after years of marriage, alleged that men are praised for being adulterers and jerks.

Juliet who also questioned why a man doesn’t get “tagged” or “bashed” for actually being at fault for why a relationship ended, wondered why the woman isn’t given the same leniency (read here).

Reacting to the post, 30-year-old Eva who announced the end of her 15-month engagement to a TV presenter and long time boyfriend, Caesar Ume-Ezeoke on Instagram (read here) two years ago, disclosed that she has gotten to a point in her life where she is only bothered about having babies instead of getting married.

The entertainer and make-up artist said she could consider the option of adopting and being a single parent. She wrote;

READ ALSO: Eva Alordiah Slams Fan Who Criticizes Her for Being Unmarried Despite Being Engaged for Over a Year

”At this point in my Life, I am more passionate about having my babies than I am about getting married. I could actually consider adopting and being a single parent. Humans are insatiable and I am thankful I have a large heart that is capable of giving no fucks what anyone thinks. It is the only way to breathe.” 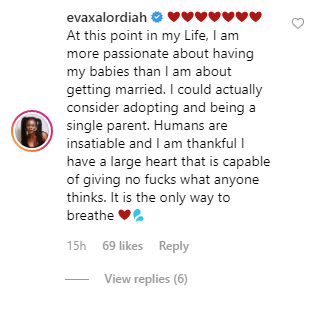 Eva was formerly engaged to Caeser before it was called off in June 2017 (read here).