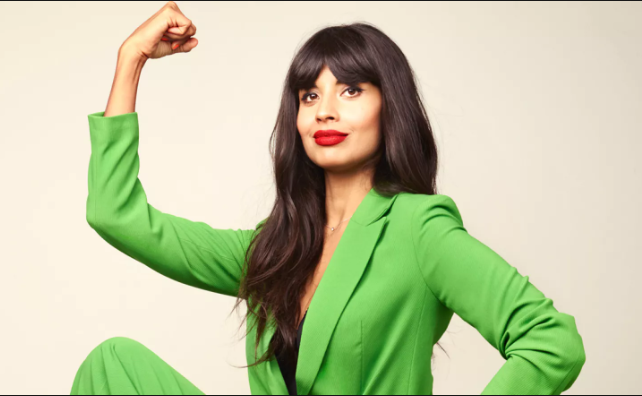 Dad-of-2, Lamar Odom Gets Candid About His Past Mistakes, Addiction To Sex & Infidelity During Marriage To Khloe Kardashian

As more and more states nationwide pass laws effectively banning abortion, famous actress, Jameela Jamil reveals she had one when she was younger and has no regrets.

The 33-year-old model and activist isn’t exactly known for backing down from a worthy fight. The Good Place actress is outspoken on social media against sexism, racism, societal beauty standards, fat shaming — basically she’s constantly fighting to make the world a better place.

That includes speaking out against the new bill that was just signed into law in Georgia, which makes abortion virtually (and in some cases, actually) unattainable to so many women.

Last week, Georgia Governor, Brian Kemp signed the most extreme abortion ban nationwide. The measure is a “fetal heartbeat bill,” known as HB 481, that would ban abortion after six weeks into pregnancy, which is when a heartbeat is sometimes detected in an embryo, but before many women even know that they’re pregnant (read here).

In protest, Jamil revealed that she had an abortion when she was younger, and called it “the best decision [she] ever made.”

Jameela wrote in a twitter thread that it is upsetting, inhumane, and blatantly demonstrative of a hatred of women.

“This anti-abortion law in Georgia is so upsetting, inhumane, and blatantly demonstrative of a hatred of women, a disregard for our rights, bodies, mental health, and essentially a punishment for rape victims, forcing to carry the baby of their rapist.

I had an abortion when I was young, and it was the best decision I have ever made. Both for me, and for the baby I didn’t want, and wasn’t ready for, emotionally, psychologically and financially.”

Jameela went on to suggest that state could face a potential problem when it comes to finding foster homes for unwanted children.

“So many children will end up in foster homes. So many lives ruined. So very cruel. This isn’t any diss at ALL to foster homes. I’m in awe of people who take in children in need of a family and a home: but if Georgia becomes inundated with children who are unwanted or unable to be cared for, it will be hard to find great fostering for them all.

The anti-abortion law is also especially targeted at those without the means/ability to move state. Women who are marginalized, poor or disabled will, as ever, be the ones to suffer the most. The wealthy will have so much more freedom.”

While abortion remains legal in other states, Jamil also pointed out that traveling in order to access healthcare isn’t a luxury all women have access to, and that these laws will have the most effect on poor and disabled women, and those who are working class and unable to take time off to travel to another state should they need an abortion.

Jamil wasn’t the only celebrity to come forward about having an abortion. Last week, actress Busy Philipps tearfully spoke about how she got an abortion when she was 15 years old on her late-night show, “Busy Tonight.”

”I know that people feel very strongly about abortion, but let me just say this: Women and their doctors are in the best position to make informed decisions about what is best for them. Nobody else. Nobody.”

She went on to say that laws criminalizing abortion wouldn’t stop anyone from making “this incredibly personal choice,” adding that the legislation would more likely put women at risk.

“I’m genuinely scared for women and girls all over this country,” Philipps said.

Just yesterday, Alabama’s governor signed a new law that bans abortion at any stage, unless the mother is in danger, a week after Georgia’s. Both states follow Kentucky, Mississippi and Ohio, who all already passed laws this year that restrict abortions.

The good news is that these laws will be legally challenged. Planned Parenthood already vowed in a statement that they would sue the state of Alabama over its new law — and they’re pretty blatantly unconstitutional. The ACLU has also vowed to challenge the laws in court.

READ ALSO: Abort or Keep? 17 Year Old Pregnant Teen Who Was Raped by Robbers Wants an Abortion | Read This Story & Join the Discussion

The Supreme Court has already upheld women’s right to get an abortion. These states are fighting a battle they already lost.

But the reality is that with any laws restricting any kind of healthcare for women, it is women who actually lose. Banning abortion won’t actually stop women from getting abortions — it will just keep women from having access to safe abortions performed by professionals.

If politicians want abortions to stop, they need to fight for comprehensive sex education for kids and easy, free access to contraception and family planning services.