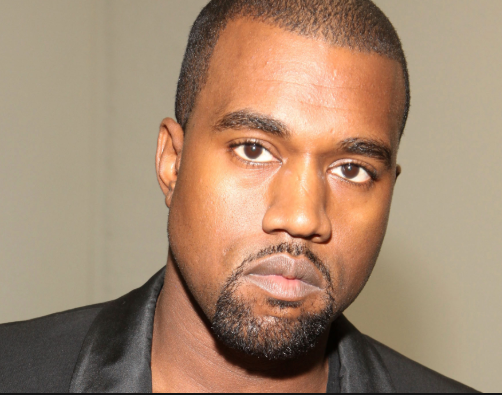 The 41-year-old dad to four little children, who has been campaigning against the stigmatisation of people with mental health issues, opened up in the new season of David Letterman’s Netflix show, “My Next Guest Needs No Introduction.”

And the Atlanta born hip hop star, who was diagnosed with bipolar two years ago, gets more candid than ever when Letterman asks him to describe what it’s like when he suffers an episode.

Kanye who is married to Keeping Up With The Kardashians star, Kim Kardashian told Letterman:

”I can just tell you what I’m feeling at the time. I feel a heightened connection with the universe when I’m ramping up. It’s a health issue, this is a sprained brain, like a sprained ankle.

Kanye who has North, 5, Saint, 3, Chicago, 16 months, and newborn, Psalm with his Kim- also reflected on the stigma surrounding mental illness which is driving him to talk more openly about his experiences, as he said,

”It’s a health issue that has a strong stigma on it and people are allowed to say anything about it and discriminate in any way.” 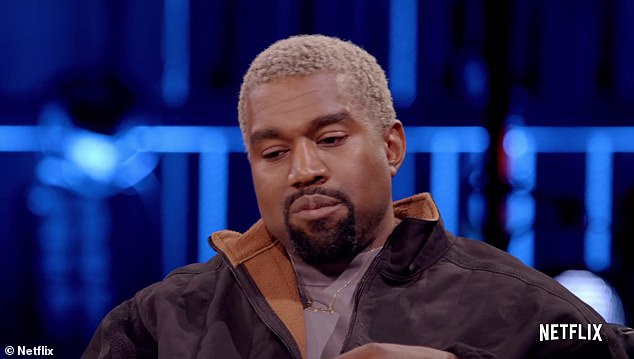 Kanye can sometimes experience psychosis during periods of severe mania, in which he feels hyper-paranoia and believes everyone is out to get him. He described the episodes to Letterman in detail saying:

”You have this moment [where] you feel everyone wants to kill you. You pretty much don’t trust anyone. When you’re in this [episode] state, you’re hyper-paranoid about everything. Everyone – this is my experience, other people have different experiences – everyone now is an actor. Everything’s a conspiracy.

You feel the government is putting chips in your head. You feel you’re being recorded. You feel all these things.”

The Power rapper recalled the distressing time he was handcuffed and drugged when he was put on an involuntary psychiatric hold in 2016. He shared:

‘They have this moment where they put you, they handcuff you, they drug you, they put you on the bed, and they separate you from everyone you know. That’s something that I am so happy that I experienced myself so I can start by changing that moment.

When you are in that state, you have to have someone you trust. It is cruel and primitive to do that. They love to write you off. They love to cut your sentences off halfway. What you say doesn’t mean as much.”

READ ALSO: Mom, Mariah Carey Opens Up On Her Battle With Bipolar Disorder 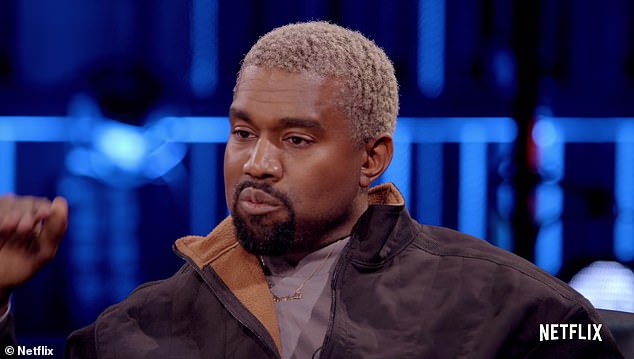 In his less severe episodes of mania, Kanye said he feels more ‘adolescent’ when he’s ‘ramped up’.

”When you ramp up, it expresses your personality more. You can become almost more adolescent in your expression. This is my specific experience that I’ve had over the past two years, because I’ve only been diagnosed for two years now.”

On the medication that he takes on and off for the disorder, Kanye explained,

”If you don’t take medication every day to keep you at a certain state, you have a potential to ramp up and it can take you to a point where you can even end up in the hospital.”

Kanye was hospitalized at UCLA Medical Center in November 2016 after suffering a temporary psychosis reportedly brought on by sleep deprivation and extreme dehydration following a stream of Twitter posting frenzies, political and personal rants at his fans and cancelled concerts.

On his 2018 album, Ye, Kanye appeared to confirm he had been diagnosed with bipolar after months of speculation.

Shortly after, during a radio interview, he stated that he was diagnosed with a ‘mental condition’ at age 39 and called it his ‘superpower’.

READ ALSO: A Look at Mental Illness Through the Eyes of 25-year-old Hauwa Ojeifo

In April, his wife also confirmed his diagnosis in an interview with Vogue, saying the couple had reached a “pretty good place” with his mental health. The 38-year-old reality mogul told Vogue:

“It is an emotional process, for sure. Right now everything is really calm. But we can definitely feel episodes coming, and we know how to handle them.”

However, when speaking with Donald Trump in October 2018, the rapper claimed he was misdiagnosed with bipolar disorder and was just sleep deprived.

What is Bipolar Disorder according to NIMH:

Bipolar disorder, also known as manic-depressive illness, is a brain disorder that causes unusual shifts in mood, energy, activity levels, and the ability to carry out day-to-day tasks.

There are four basic types of bipolar disorder; all of them involve clear changes in mood, energy, and activity levels. These moods range from periods of extremely “up,” elated, and energized behavior (known as manic episodes) to very sad, “down,” or hopeless periods (known as depressive episodes). Less severe manic periods are known as hypomanic episodes. 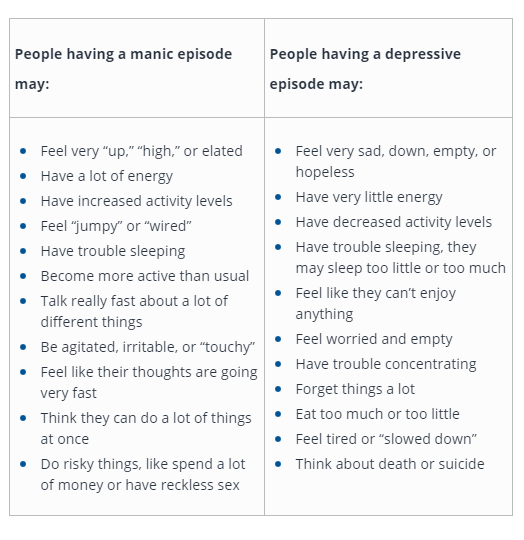 Mood episodes are drastically different from the moods and behaviors that are typical for the person. Extreme changes in energy, activity, and sleep go along with mood episodes.