A popular Facebook user and Nigerian feminist, Nkechi Bianze has shared a lengthy post to praise Regina Daniels’ mother, Rita Daniels for taking charge, raising her kids on her own, and damning tradition to give her daughter away in marriage by herself.

Nkechi, while praising Rita Daniels, used the opportunity to advise single mothers to learn from Regina’s mum. She also advised children of deadbeat fathers to take a cue from the teen actress and quit going after their deadbeat fathers.

Nkechi in her post, highlighted three reasons why she loves Regina Daniels’ mother, Rita Daniels, whose estranged husband cried out a few days ago of being sidelined in their daughter’s marriage to a 59-year-old billionaire, Ned Nwoko.

Her three major reasons identified Regina’s father Mr.Jude as a sperm donor who abandoned his family, Nkechi was pleased with Ms. Daniels for converting the names of her children from their father’s to her own maiden name. She single-handedly raised and supported her kids to the best of her ability, and when it was time for her daughter to get married, she acted alone as her only parent.

Three Reasons I Love Rita Daniels
1. As soon as the irresponsible sperm donor abandoned them, she changed Regina’s surname from Ojeogwu (Regina’s biological father’s surname) to her own maiden name, Daniels.

2. She raised and supported Regina Daniels to her best of ability.

3. When it was time for Regina to get married, she acted ALONE as the only parent Regina has.

She totally erased the man from their lives and did her thing.

And I love Regina Daniels for still not giving a damn about her deadbeat father.

Ladies and gentlemen, this is how to treat a sperm donor.

I heard that Regina’s biological father is deadbeat, and he’s said he doesn’t approve of the marriage. This is quite funny. Who is he again?

Like seriously, what gives these deadbeat fathers this much guts?

If not because of some stale traditions, where would these men borrow their guts from?

I mean, from the common sense point of view, what would give a person who has not played a role in your life the gut to think that his opinion about your marriage matters or that he deserves to receive bride price?

Why do some deadbeat fathers still feel this entitlement over the children they abandoned?

You daughters of deadbeat fathers who go and beg/invite them to your weddings, how do you feel in your heads when you go and beg a man who absolutely abandoned you to come and act as a father for your wedding and collect bride price and “the list”?

So, when men who have been there through thick and thin for their children are doing “father of the bride or father of the groom”, your irresponsible sperm donor daddy is also playing that role?

I don’t understand the rationale behind some of these stupid traditions. A man gets a woman pregnant and abandones his responsibility. The woman SINGLE HANDEDLY raised the child(ren). Then when it’s time to get married, traditions demand that they got back to the irresponsible sperm donor to BEG him to come and collect bride price? What sort of EXTREMELY STUPID TRADITION is that?

Any tradition that rewards deadbeat fathers by making them entitled to bride price and every honour a father should get is a stupid tradition.

So, the woman who raised the child… what does she get? She’s the all-round loser and the mumu, huh? She raised the child on her own while the man was being an idiot. But some of these traditions say that her opinion doesn’t matter.

As a man, you ejaculated sperm into a woman’s vagina years ago and took no responsibility whatsoever for what the sperm turned out to be. Decades later, you crawl out from the hole you’ve been in to claim that you are a father. You, my dear psuedo human is mad!

Listen, even mad men, idiots, morons and imbeciles can release sperm. What makes you a father involves playing an active role in the life of your child(ren).

There are many women on my list who are raising their child(ren) alone because the fathers of their child(ren) abandoned their fatherly roles. Most of you read me. And I hope you people have the strength and will to stand your grounds when the time comes.

Take a hint from Regina’s mum and damn all stupid traditions. If you raised your child(ren) alone, then ONLY YOU deserve the honour as a parent to your children.

The thing is that many of you are too lazy. You don’t have the strength to fight. After you have finished suffering, you will still think you don’t deserve to accept bride price or whatever price.

Single mothers who raised their children alone deserve to be the ones to accept bride price or any other honor the parent of the bride should get.

It’s ok to change your children’s surnames to yours. I just want you to understand that. Yes, I said it!
My graduate school housemate’s mum changed her name as soon as her father abandoned them to another country to marry another woman. Many people are now doing this.

Young men of today need to begin to realize that they will not get away with being deadbeat fathers to their children. We as a society, especially single mothers and women need to begin to send across this message.

Deadbeat fathers are the scums of the earth.

Resist the temptation to come here with that “there are deadbeat mothers too” line of lamentation. I want to discuss deadbeat fathers now. If you want to talk about deadbeat mothers, please make a post on your wall and do it there. Thank you! 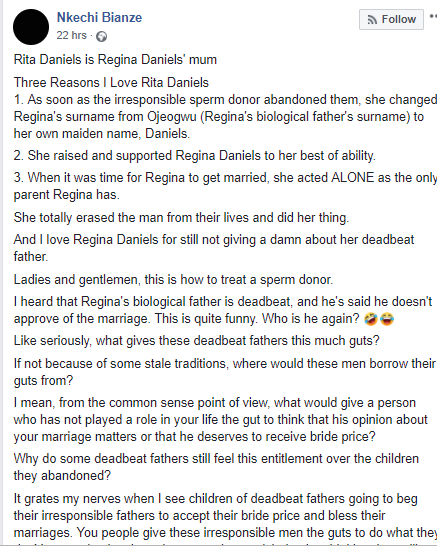