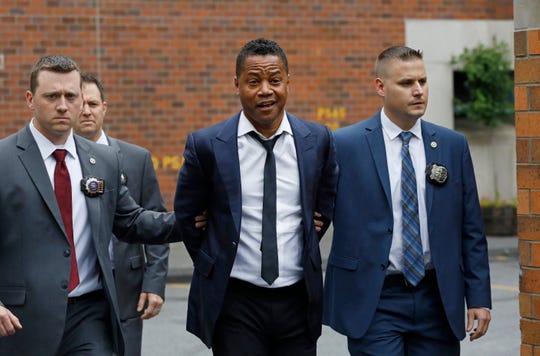 Sought for three days for questioning on a sexual-misconduct allegation, prolific American actor, Cuba Gooding Jr. voluntarily surrendered on Thursday to New York police. The actor landed himself in the inglorious situation after he allegedly touched a woman without her consent at a bar.

According to police, Gooding, 51, touched a woman without her consent on Sunday night in Midtown Manhattan. She filed a police report afterwards. News video posted on Twitter earlier Thursday showed police walking a cuffed, smiling Gooding out what appeared to be a back door of the precinct.

The Oscar-winning actor was accused of drunkenly groping the woman’s breast while partying and drinking with her at the Magic Hour Rooftop Bar and Lounge in midtown Manhattan on Sunday night. According to TMZ, Gooding denied the accusations when they approached him on Wednesday.

“I trust the system and the process,” he said. “There’s a tape that shows what really happened. That’s the most important thing.”

Gooding, who broke through with the 1991 film “Boyz N The Hood,” won an Oscar in 1997 for his supporting role in “Jerry Maguire.” He earned an Emmy nomination in 2016 for portraying O.J. Simpson in the first season of the FX anthology series “American Crime Story.”

In 2012, a New Orleans bartender accused Gooding of pushing her after she asked him to leave the establishment. He had allegedly become angry with fans who wanted to take pictures with him. Police issued a misdemeanor battery warrant for his arrest, CNN reported at the time, but the bartender eventually dropped all charges.

Gooding’s lawyers could not be reached by The Post.