Nigerian actor, IK Ogbonna took to his Insta-story to dish out advice on how to make marriage work and avoiding crisis in marriage.

This is coming hours after her estranged wife and mother of one of his children, Sonia Morales hinted in a live question and answer session on Instagram, that they have pulled the curtains on their young marriage (read here).

According to IK, dad-of-two, issues in marriage can be resolved if the husband and his wife learn to solve their problems quickly. The actor further stated that whenever one spouse wins, the marriage loses.

Below are the tips…

”Most marriage problems can be solved if husband and wife would learn to solve problems quickly, openly, respectfully and courteously like adults and in a mature way.

Do not emotionalize every discussion.

Learn to disagree without getting angry.

Learn to disagree without being disrespectful.

Learn when to stop the argument before it gets into a verbal war.

Learn when to walk away or change the subject.

When indisputable facts are presented, learn to say , ‘you’re right, I was wrong”.

Learn to argue factually allowing your spouse to express himself or herself fully without fear of judgement or reprimand.

Avoid name calling or saying words that you will regret saying.

In marriage, often you have to lose an argument in order to win your spouse. Usually whenever one spouse wins, marriage loses.”

READ ALSO: After Marital Issues With Wife, IK Ogbonna Gives His Thoughts on Marriage, Divorce, And Calls For A Change

Rumours have trailed the Ogbonna and Sonia’s marriage since last year but neither of them addressed the speculations. Sonia, who now lives countries apart from the father of her son, was having a question and answer session on Instagram yesterday when a follower mentioned she loves her family and hopes she and her estranged hubby can get back together.

The follower expressed hope that the couple would mend fences if there’s a problem with their relationship. But Sonia answered that getting back together is not always the best idea and cautioned the hopeful follower.

”Guys, you really need to stop pushing people “back together”. How about we just wish each other happiness and peace of mind instead?.” 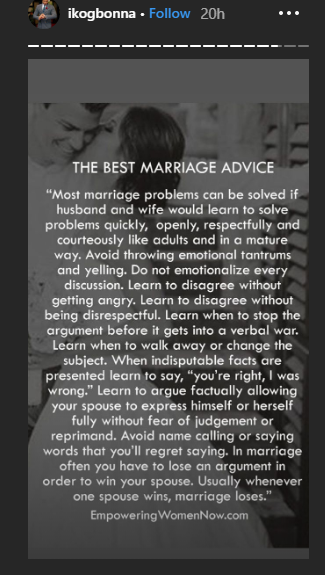