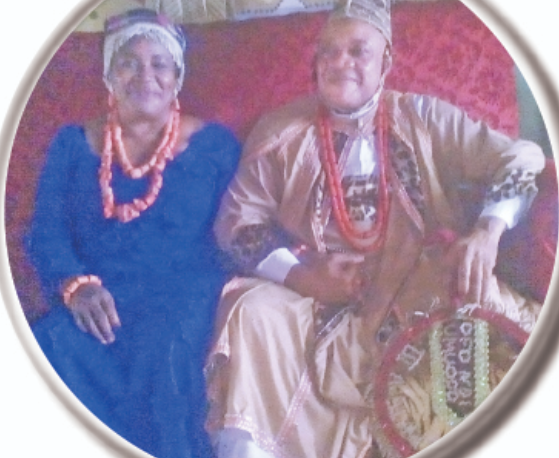 His Royal Highness, Eze Abdulfatah Chinemeze Emetumah of Umuofor Kingdom in Oguta Local Government Area of Imo State, and his queen, Ugoeze Fatimah Ijeoma are not only traditional rulers but also Muslims.

The couple got married in 1982 when Fatimah was just a secondary school teen. She later went back to school to chase her dream after having all her children, a decision they both made.

She had her BA, MSc and PhD in Mass Communication, a step not every man can tolerate in our society as at then. According to Eze, if it were pure Islamic society where men are separated from women, you can’t tolerate it. Having done that, Eze advised today’s young men to do same.

Their marriage has spanned for more than four decades and counting. In a recent interview with Sun News, the couple shared story of how they met before getting married, of what they admire in each other as well as the secret of their marriage.

Tell us how you got married to your wife?

Husband: That was before I left for Saudi Arabia and then I made up my mind that I was going to get married to the daughter of one of the prominent Muslims in Eastern Nigeria, Alhaji Chief Tijani Akubuo of Amaifeke in Orlu Council Area of Imo State.

So few months after I got to Saudi Arabia I started communicating with her and with the consent of my parents, we did the Islamic traditional wedding. Then I went back to Saudi Arabia.

Husband: I am a convert. My parents converted to Islam in 1970, whereas she was born into Islam in 1965 which means she was a Muslim before me.

Wife:  Yes it’s around that 1981 that I knew him. He used to come to our house and he used to write letters to me but I did not know he was the one writing those letters.

What type of letter was he writing?

Wife: Love letter, of course. He said he wanted to marry me; that was when I was in secondary school. I saw it as one of those things boys usually do, so until when he came back in 1982, not 1981. Then we did our traditional wedding. My father persuaded me because I was very small then, about 16 or 17 years.

My father encouraged me but my mother said no, that he was a small boy, and he had nothing.  But my father said he could be somebody tomorrow, so that was how I consented to that proposal. The marriage was in 1982. I was in secondary school, after that I went back to school.

Was there anything like an opposition from friends or relatives to disrupt the marriage process?

Husband: No. What I would say is that her father was very prominent not only in Islam but in Orlu as a whole. He was a wealthy man, a Muslim and a merchant. I think there were many suitors going after her, but my belief in God and also the love my father-in-law had for me as a Muslim made me to have an edge over other suitors who were not Muslims.

What exactly did you see in her because I am sure there were lots of other beautiful girls?

Husband:  In Islam, Prophet Mohammed (SAW) told us that there are four things that make a man admire a woman. One is because of her wealth, either from her or from her parents; her beauty, her fear of God. The Prophet said whoever that marries a woman for the sake of my fear, for the fear of God would have every other thing added to him. So if you marry a woman because she is God-fearing, in that you are going to find beauty and wealth.

What actually did you see in him that made you reject other suitors?

Wife: As a child, in fact, to tell you the truth, I was not seeing anything. I was just there. I was guided. These other suitors you are talking about were too many. It was my parents’ decision to either allow or not, but in his own case, he became so persistent.

Wife: Persistent. Writing letters, you would tear and throw away his letters, he would write another one.

Wife: I said this one does not want to leave me alone. At a time in my innermost self, I just decided to try him since my parents had settled for him. S I decided to obey my parents and of course every other thing was added unto it.

Husband: My father-in-law was a very strong Muslim. He wouldn’t accept any other suitor except that person was a Muslim, and among them I was number one, so I was ahead.

Tell us how you proposed to her.

Husband: Apart from those letters?

I mean, when you saw her face to face, what did you tell her?

Husband: When I met her face to face, that was at Onitsha, in their house at Zik’s Avenue. I went there with my father and a driver.  This man now who is the gate man, was the driver then. When I got there, I went upstairs and they gave us some chance. We sat together. Then I told her my intention.

What exactly did you tell her?

Husband: I told her that I wanted to get married to her, that I want her to be my wife. Although she was reluctant but she nodded her head and that was how I knew that I had succeeded.

Wife: I was just complying with everything my parents wanted me to. I said yes, no problem, I have agreed.

Husband: The wedding was Islamic-cum-traditional. What happened was that day I could not complete the dowry and my father-in-law came to my rescue.

Wife: That time? Seventeen-years-old girl. I was just there. We were dancing, eating. If there were other things, I cannot remember, but I know that things were going on well.

How were you able to manage your first misunderstanding?

Husband: You know we are men. There is nothing you can do to your wife and she would not suspect you of, maybe, having a wife somewhere or extra-marital affairs. Sometimes she used to challenge me and I used to defend myself because we are Muslims and most Muslims are polygamists.

So she saw me as a potential polygamist. Believe me, I don’t have that in my programme. I don’t have any girlfriend. I know some of my friends who are Ezes have a lot of friends, women. So sometimes when I travel with them, they are surprised how I just keep to myself.

READ ALSO: Private: ‘Don’t pray for a man who is faithful to you’ –Actor, Deyemi Okanlawon Gives His Two Cents On Marriage Based On His Experience Over The Past 6 Years

When he tries to explain those things to you, do you believe him?

Husband: There was a day we were breaking a fast at Abuja in a friend’s house and everybody was talking about his life. At a point, I told them I didn’t have any girlfriend, and they were surprised. I swore by Allah and they had to agree with me, and they started asking me how I was coping without it.

Husband:  She is very open. I hide sometimes especially when people does wrong to me, but on her own part, she would tell that person that she does not like what the person did to her. When it comes to that, she is an extrovert in trying to open up when people do wrong to her.

But for me, I try to pretend but that is not the best. I like her for that among other qualities she has. Again, she is always looking younger every day, although to her she thinks I no longer admire her, but to me I do. She looks younger to me every day.

Wife: What I like most about him is that, he is very energetic and when it comes to somebody who wants to get something, he goes all out to fight for it. I think i like that.

What advice do you have for bachelors who want to get married?

So what I am trying to say is that marriage is a union of two people where there is two offenders and two forgivers. So they must always try to forgive themselves because as long as you live together nothing would stop you from offending each other. In as much as you can’t stop that offence, you can’t stop the forgiveness.

What advice do you have for spinsters?

Wife: They should be very patient. With patience you can get to the top. If you want to get it all at the same time, you would miss the track. So my advice to spinsters is, there is no good quality, just make the man the way you want him to be. A woman can do that, it all depends on her perseverance.

There are so many broken homes today. What advice do you have for couples who want to achieve success in marriage?

Husband: They should try to understand each other, have feelings for each other and create time for interaction, and communication. She came in as my wife in 1982 but gave birth to all our children before she went to the university.

She had her BA, MSc and PhD in Mass Communication. Not every man can tolerate that in this society. If it were pure Islamic society where men are separated from women, you can’t tolerate it. Having done that I think I will advise some young men to do same.

They should not allow external influence to come into their marriage. I think that is going to help sustain the marriage. My first son is married now. I try to get myself out of their marriage. They should manage themselves, it does not concern me. I just play the role of a sister to my son’s wife, to encourage a mutual relationship and also urge her to emulate our marriage.