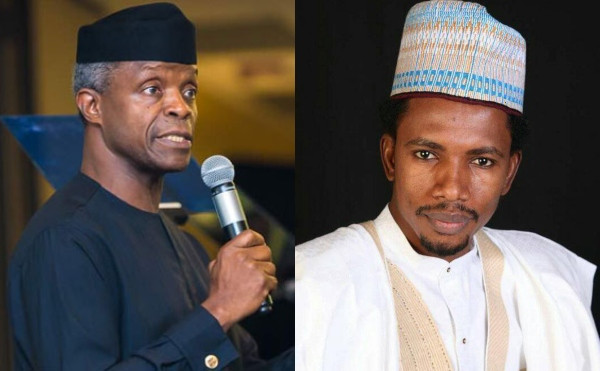 How Single Mum-Of-Five, Leshia Champs, Navigated The Odds To Pass Her Bar Exams Is True Inspiration

As criticism continues to trail the youngest Nigerian senator, Elisha Abbo who was recently caught on camera ruthlessly assaulting a nursing mom at an Abuja sex toy shop (watch the footage here), Professor Yemi Osinbajo, Nigeria’s Vice President declared that it is despicable to slap women.

The proud dad-of-three made the assertion on Monday, July 8 in his tribute at the launch of a memoir by Olusegun Osoba, the former governor of Ogun state, The Cable reports.

Osinbajo went down memory lane to recall how British born Patrick Chadwick was forced to resign after he slapped one Adekunbi Adeite, a Nigerian sales girl, at the Kingsway Stores in Lagos, Prof Osinbajo condemned and described the act of slapping women as a “despicable business”.

Osinbajo, without mentioning names, seemed to have been sending a cryptic message to Senator Elisha Abbo. The VP pointed out that as a journalist, Osoba reported the case involving Chadwick, and the latter had to resign and was punished. He said:

”But his scoops went beyond the political, he exclusively reported the case of British-born Patrick Chadwick, who slapped a Nigerian sales girl, Adekunbi Adeite, at the Kingsway Stores in Lagos (this despicable business of slapping women seems to have been around for a while), and how the UAC and some other journalists tried to cover it up.

It became a national issue and the UAC eventually punished the culprit and he resigned.”

“Chief Olusegun Osoba’s illustrious career as a journalist and later politician, have also by some uncanny stroke of good fortune, placed him at the centre of many defining moments and situations of post-Independent Nigeria.

Arguably the most memorable is his January 1966 scoop; the tragic discovery of the bodies of prime minister Tafawa Balewa and finance minister Festus Okotie-Eboh, not long after the coup that ended Nigeria’s First Republic.

He was there on the frontlines in many sectors of the Civil War, recording and reporting the horrors and tragedies of a factional war. And it was he who witnessed the surprise visit of Dr Nnamdi Azikiwe to Lagos during the Civil War.

He was also right there on the frontlines, nine years later with exclusive reporting during the coup that brought General Murtala Mohammed to power.

He happened to be in the governor’s office in Enugu when the then commissioner of police, Kafaru Tinubu, sent word of the capture of Lt Col Bukar Dimka, the man who assassinated Murtala Mohammed. He was the only journalist to see Dimka in handcuffs in police custody in Enugu.”