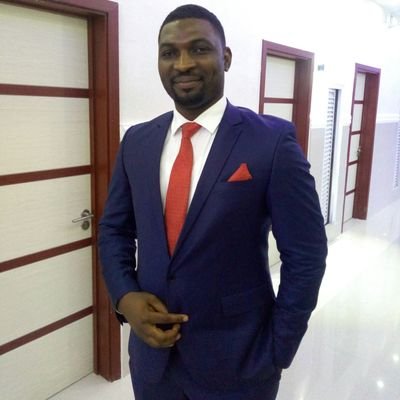 In Nigerian society and culture, the pressure put on married people (especially women) to take in, has unarguably pushed a lot of women into doing not only criminal things like kidnapping, but ridiculous things that most times put their health at risk.

A Nigerian doctor, Abah Ehi Peters is bringing to light an on-going scam in the eastern part of Nigerian, called ‘Cryptic Pregnancy scam’.

Cryptic Pregnancy involves certain people posing as medical experts to brainwash desperate women in need of children, into believing they are pregnant.

According to Dr. Peters who brought this to light via his Twitter page, these women seeking children are injected with a high level of oestrogen and sometimes progesterone hormones that cause the abdomen to bloat/enlarge, causes formation of cysts and appearance of being pregnant.

He shared a conversation with a patient who believed she was pregnant but was worried because she was still seeing her period 3 months into the supposed pregnancy. On further inquiry about how she found out she was pregnant, she opened up about the Cryptic Pregnancy.

This is an eye opener. Below is how the woman, a lawyer narrated the whole scam to Dr. Peter…

”Cryptic Pregnancy Scam. It was a cold and rainy morning sometime in April, when one of the OPD nurses on duty knocked on the consulting room.

Nurse KC: Doc, are you free? There’s a new patient that will like to see you.

Me: Okay, Please send her in. Good morning Ma’am, how may I help you?

Patient: Good morning Doc, I am about 3 months pregnant but still seeing my menses monthly and I am worried.

Me: It is not normal to be pregnant and still be bleeding or seeing your menses. How was this pregnancy confirmed? PT? Ultrasound Scan? Any pregnancy symptoms?

Patient: They said I should not go to any hospital for antenatal or pregnancy tests because the baby won’t show in scan and pregnancy test would be negative.

Me: Who are these “They” that told you these? It is strange that a woman will be pregnant for 3 months yet PT test can’t detect hCG level or ultrasound scan show the fetus.

Patient: Ha! Doc, you’ve not heard about cryptic pregnancy that most women are going for in this town?

Me: (Dumbfounded) Cryptic Pregnancy? You mean the MTV’s series “I Didn’t Know I Was Pregnant”? I don’t understand ma’am.

Patient: No, Doc there’s a woman that gets women pregnant via cryptic pregnancy n they even have a WhatsApp group where some ladies share their testimonies.

Me: Ma’am, from your bio data I can see you’re a Barrister, when you heard the word cryptic, weren’t you skeptical about the whole process? Cryptic is something obscure/not clear or mysterious. Why allow someone help make you pregnant and it’s is now cryptic/hidden or suspicious?

Me: Okay, let’s google what cryptic pregnancy is all about together. Cryptic pregnancy or stealth or delayed pregnancy is a lack of subjective awareness of pregnancy until the end of gestation in pregnant women. They aren’t common, but they’re not unheard of, either. It has an incidence of 1:475. Causes are not clear. There is no medical literature to support the fact that someone can make you pregnant in a cryptic way.

Me: Ma’am, so you see that cryptic pregnancy is an abnormal finding and not a normal one. Please tell me more about it.

Patient: I was introduced by a friend, they have 3 categories N500,000, N1,000,000 and N1,800,000 depending on sex selection and success rate. On my 1st visit to the clinic after confirmation of payment, something was inserted into my vagina and I was asked to have regular vaginal sexual intercourse with my husband and return in 4 weeks time and was told am pregnant in a cryptic way and that I should not bother going to any hospital for antenatal or for pregnancy tests because the baby won’t show in scan.

Me: Did you ask them what was inserted into your vagina?

Me: Why not? Beside being a Lawyer don’t you know it is your right to know what drug is being given to you, why it’s being given and possible side effects/reactions?

Patient: Was told to only visit their clinic and come regularly for an injection until the completion of 9 months after which I will deliver via c/s because the baby is a special one. And that I will continue seeing my menses but should not be bothered.

Me: Wow!!!, how many of such injections have you received?

Me: Okay, now before we continue let’s do an “Abdominopelvic ultrasound scan” with our 3D ultrasound machine and have our experienced Radiologist & Sonographer search for that hidden baby in your body.

About an hour later after a thorough scan and a repeat PT test. No baby was found and PT negative. Only findings was an enlarged liver, ?left ureteric stone, right ovarian cyst and multiple leiomyoma.

In summary, after thorough investigation and interviews of other women that victims of this scheme by me and my colleagues; This is our findings/conclusion.

What these scam centres actually do is that they keep injecting these women with high level of oestrogen and sometimes progesterone hormones that cause the abdomen to bloat/enlarge, formation of cysts and appearance of being pregnant.

These frauds ain’t concerned about the implications of high doses of such hormones on these women like breast cancer, ovarian cancer and stroke.

By the 9th month these victims are booked for fraudulent elective c/s and general anaesthesia is used to put them to sleep and upon recovery or waking up from the effect of the anaesthesia she will find a baby or babies by her side depending on the amount paid.

We discovered that most of them can’t initiate breast feeding or don’t breastfeed at all. This elaborate scam brainwash these women and they throw all sense of reasoning away no matter how educated they are. Their desperation for a child make them easy prey.

”I experienced this once in a private clinic,where the woman was rushed in one night,she was having frequent watery stool, try getting her history, I learnt she just delivered via the cryptic pregnancy thing, and was given some concortion that was causing the watery stool.

After d delivery she was told to go to a hospital dat’ll take care of the watery stool and then check the baby well. I was trying to ask her some more questions and she was dodging some of my questions until the nurse called me out and explained the whole thing. I was wowed.”

”Yes a lot of people have been scammed of this same cryptic pregnancy. I know of a woman whose liver and kidneys are damaged and bloated as a result of this. They use those injections to inflate their organs so they will look pregnant and then tell them not to visit any hospital.

They will continue giving them the injection till 9months. Then on the 9th month, they will inject the woman to sleep and when she wakes up that’s if she will?she will find a baby next to her (probably a stolen, bought or abandoned baby).

God bless you for Cryptic pregnancy education I know someone who started d process & believed she was pregnant. Around supposed 7 months, she developed symptoms of Liver dx. Her eyes were so yellow & she was forced to go to hosp, she died there. Her abdomen was opened, of course, no Baby.

What about women who never took any drug but have cryptic pregnancy? These things happen. One of my friends told me them he was in his mother’s womb for 3years and 9months and I didn’t believe him. Till someone told me of a woman who was pregnant for 4years and people were laughing at her till she delivered on her own. Not all cryptic are fake. Get your facts right. In fact real cryptic I have heard of, they deliver by themselves no CS was done on them.

This is PRESSURE and we are all guilty. Mother in-laws are the number one culprits. We the rest won’t allow women rest 2 months into marriage we are already seeing baby bumps in her pictures. Leave women alone and stop pressuring them with pregnancy. 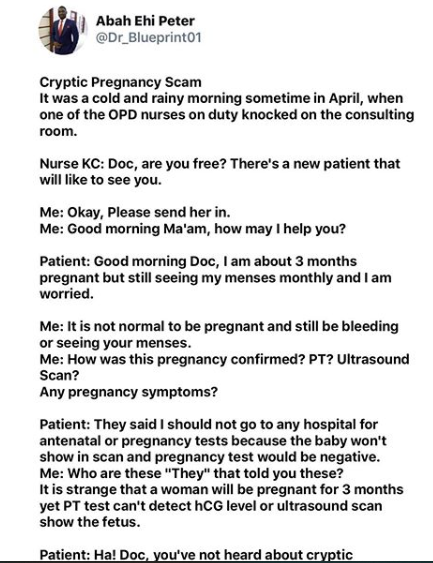 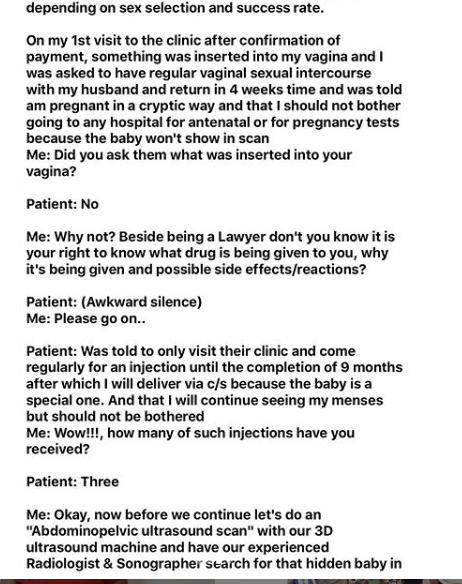