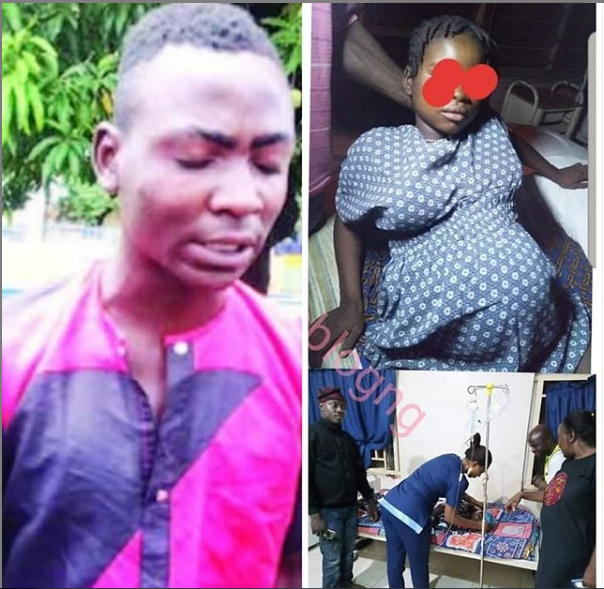 ‘I am DNA proof my father is a rapist’ – Chilling BBC Documentary Of A Woman, Vicky, Suing Her Dad After 40 Years

The Benue State Police Command, on Thursday, paraded 15 suspected criminals arrested for various crimes in the state. Among those paraded was 18-year-old Terna Taga, who allegedly raped and impregnated 10-year-old Masenengen Targba, read here. Targba was sheltered at an Internally Displaced Persons’ camp in Benue state and was delivered of a baby girl last Sunday in Makurdi.

According to reports, Taga has confessed that he was responsible for the girl’s pregnancy, adding that he slept with her twice and accepted that he was the newborn baby’s father.

“Yes, I slept with her twice in December last year. She consented to it; it wasn’t a rape,”

Speaking on the 10-year-old girl, the state Commissioner of Police, Mukaddaa Garuba, said,

Watch As Actor, Baba Ijesha Confesses And Begs For Forgiveness After Being Caught While Allegedly Attempting To Molest The 14-Year-Old Minor

“The victim, who is an orphan and living with her uncle, one Iorja, was allegedly raped by one Terna Taga, 18, of the North-Bank area of Makurdi.

The victim became pregnant and has been delivered of a baby girl.

Investigation revealed that the uncle was making arrangements to marry her out to a blind old man when he discovered that she was pregnant.The uncle is currently at large. The suspect will soon be charged to court.”