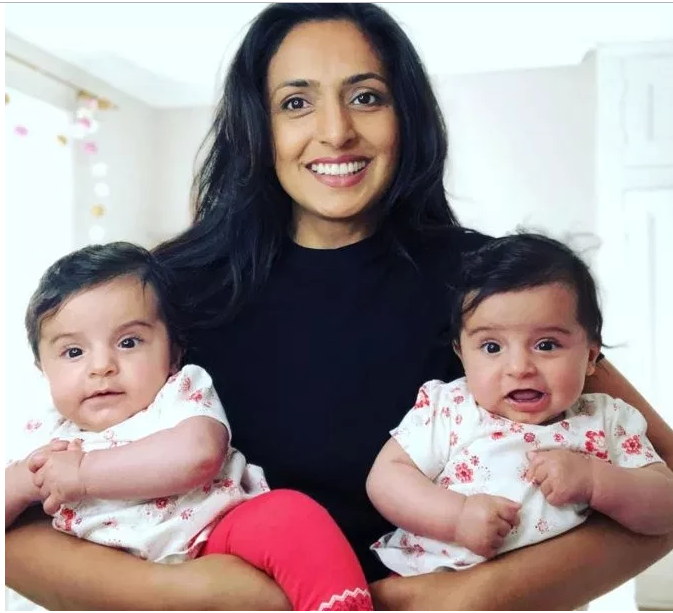 Doctors told Monica Dylan that she might never be able to get pregnant and have biological kids due to a very low number of ovarian follicles. At the age of 41, Monica defied the odds and became pregnant under the most atypical circumstance.

The retail manager who had resigned herself to fate defied the odds and became pregnant while on a Mediterranean cruise with pal Anita Bristol, 38. Monica became pregnant with twins at the age of 41 after a one-night stand and gave birth to daughters Athena and Luna on January 7.

“One night, I spent hours chatting to a man I met on the cruise – who was gorgeous and stylish – and couldn’t ignore the spark between us.

One thing led to another and, to my surprise, we ended up having sex.

We’d had one too many drinks – the reason we hadn’t used contraception.

Looking back, I knew it was foolish. But, at the same time, I was thrilled when I realised I might be having a baby.”

“I hadn’t been home long when I started feeling funny. I felt dizzy, like I was still at sea.

I searched my symptoms online and self-diagnosed myself with post-motion sickness, which is apparently quite normal after a cruise.

When the queasiness didn’t subside, the possibility of being pregnant crossed my mind, but I knew that was unlikely.

I bought a test to rule it out and was gobsmacked when I saw the second pink link appear on the stick.”

Monica explained that she always wanted kids and had split from previous partners because they didn’t want kids.  She thought her ex was the perfect man for her but he eventually changed his mind about having kids and they split up, leaving her devastated.

After splitting from her ex, Monica’s friend Anita suggested a girls’ trip to cheer her up and Monica, who still hoped to become a mum, tossed a couple of Euros into Rome’s Trevi fountain and wished for a kid.

“Anita had been talking about going on a cruise for a while and it seemed like the right time for a trip away.

I’ve known Anita for 20 years and if anyone knows how to have a good time, it’s her.

I knew I was in good hands. On the ship, we began discussing my new life plan.

We agreed to make the most of our freedom by enjoying nights out and weekends away, traveling the world and maybe even living abroad together for a while.

We also planned to look after each other when we were older and I decided I could simply spoil my nieces and nephews, rather than have a baby of my own.”

On one night during their vacation, the friends arranged to have dinner with two men they’d met earlier on the trip.  One of the men ended up becoming the father of Monica’s kids.

“Anita nagged me to make an effort for dinner and drinks. I was happy with what I’d been wearing all day, but somehow she convinced me to dress up. It’s lucky I did.

Monica said she was shocked to discover she was pregnant. Then during her 8-week scan, she had another shock when she was told she was expecting a set of twins.

“The sonographer turned the screen around. He showed me my baby and then he moved the wand slightly and said, ‘And here’s the other one’.

I thought he was joking and my friend who had come with me burst into tears, which set the nurse off crying too.

It quickly dawned on me that I wasn’t just going to be a mum, but a mum of twins. I was so shocked I didn’t say much until the news finally sunk in.”

“When I told Anita, she screeched down the phone with excitement. I also told the father of the twins and he was really good about it.

Despite us not being in a relationship, he respected my decision to go ahead with the pregnancy and said I had his full support.”

Monica was induced at 37 weeks and was rushed into theatre for an emergency C-section when one of her placentas ruptured. She welcomed her non-identical twin daughters two days before her 42nd birthday.

“When I held them both in my arms, it was such a strange feeling. They were so beautiful, I couldn’t stop gazing at them.

My daughters were the best birthday presents I could ask for.

Becoming a mother hasn’t worked out the way I always imagined it would and I know there will be tough times ahead, especially being a single mum, but I have a lot of love to give to Athena and Luna.

They are certainly keeping me on my toes. Life is hectic and I’m exhausted – but I’m loving life with my girls. They make me laugh all the time.

I’m so grateful to Anita for encouraging me to make an effort that fateful night.

Having a holiday fling was definitely out of character for me but I’m so glad it happened, I can’t imagine life without Athena and Luna.

I wanted a child for so long and now am lucky enough to have two.”