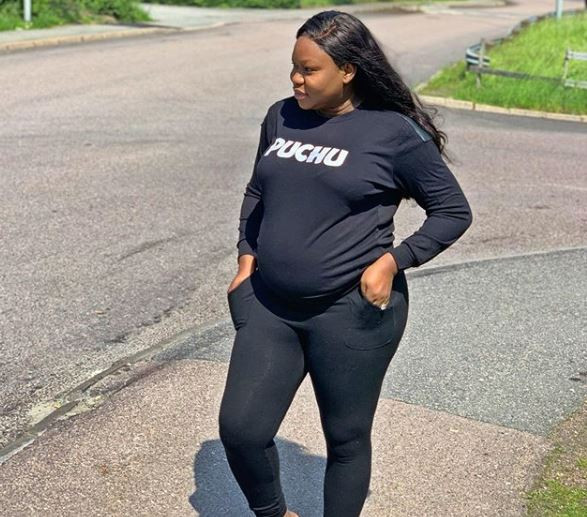 One of Nollywood’s multi-talented actresses, Ruth Kadiri is now a mother. According to online reports, the celebrated actress and producer who had her traditional and white wedding last year welcomed her first child yesterday, August 21, 2019.

Just yesterday, the latest mom in town decided to make a big reveal about herself on social media. She shared a photo and video of her rocking her baby bump.

The mom whose excitement about being a mother seems to be growing rapidly wore a tracksuit, while proudly flaunting her huge bump. Ever since she shared the adorable photo and video, her colleagues and fans have stormed her Instagram page to congratulate her on her journey to motherhood.

Back in December 2017, Kadiri had announced that she was engaged and her fans were more than excited for her. In November 2018, Ruth and her husband, Mr Ezerika had their low key traditional and white wedding.

READ ALSO: ”… having your married friends around your man is long over ” – Ruth Kadiri Warns

She later took to social media to announce it. Excited Ruth did not stop there as she also made sure to include her husband’s name, Ezerika, to her social media profile.

Actress, Ada Ameh Shares Candid Details About How She Was Introduced To Sex By Her Peers, Became A Mum At Age 13 And More

Kadiri is a graduate of the prestigious university of Lagos where she studied mass communication. She joined the Nollywood movie scene in 2009 and since then, she has gone on to make a name for herself in the industry.

Congratulations to them all!