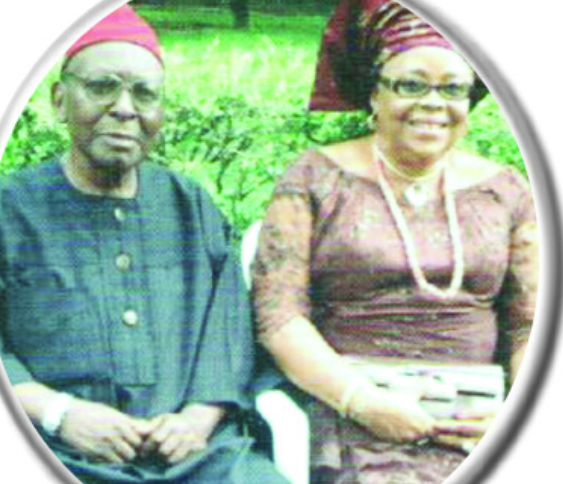 The couple, both parents of the internationally acclaimed writer, Chimamanda Ngozi Adichie, wedded on April 15, 1963, and are, today, blessed with six children: three boys and three girls, and many grandchildren.

In an interview with Daily Sun, the duo talked about what it takes not only to maintain a long-lasting marriage but also to keep the divorce bug at bay in your relationship.

In many of her interviews Chimamanda had, while talking about you, said that one thing he likes about you is your respect for your wife, her mother. If I may ask, what does respect for women or one’s wife means to you? I ask because of the rampant cases of wife battery these days.

Husband: I think it has a lot to do with one’s upbringing. The way you are brought up in your family will affect how you live your life. My parents were Catholics and had great love for each other and for us. The way we were brought up affected how we lived.

When you are brought up like that, it would not be difficult to show respect to your wife, your children, to women in general, and to your brothers and sisters. Christ, our Mentor, told us in the Bible to love one another. That is to say, honour your father and mother; respect those older than you. Honour and respect your wife. Don’t beat her. That is the Christian teaching.

And if Nigerians would live this teaching out, then there would be no problem in our homes and nation. But oftentimes, we don’t. So, this is my response to what Chimamanda was referring to. I respect my wife. I also respect Chimamanda because she does things to my liking.

Talking about your children, Chimamanda is the one most known to the world, for obvious reason. Could you tell us a little about others, starting with your first child?

Husband: My first child is a girl.

Husband: ljeoma, Rosemary. She was born in the U.S.

What did she read?

Husband: Mediçine. Her husband is also a medical doctor, from Amawbia, Anambra State. Both of them live in Connecticut, U.S.A. My second child is also a girl. Her name is Uchenna but we call her Uchy. She was born in 1966. She was four weeks old when we came back from the United States. She read Pharmacy, She is married to an Agulu man, and together they have twin girls.

Her husband is a businessman but my daughter works with NAFDAC. My third child is a boy, Chukwunweike, but we call him Chuks. He was born in Nigeria, in 1968, after we returned from U.S. That was during the Nigeria-Biafra civil war. He read engineering at the University of Nigeria, Nsukka. He is married with two children. The fourth is a boy, Okechukwu, shortened to Okey.

He was born in Nigeria in 1973. He read Library Science. The fifth is Chimamanda, born in 1977. The sixth and the last child is Kenechukwu, a boy. I call him Onye Ocha (white man, on account of his fair complexion). He was born in 1980.

First, he went to school here in Nigeria and started to read Biochemistry, but along the line, he transferred and travelled to the US. He graduated from a university in Connecticut. He is still there, but right now he is into something that has to do with computer science. He is now working in the U.S.

There seems to be a wide gap in age between the first three children and the last three that includes Chimamanda. Was it something deliberate, I mean, a decision to stop having children that later went awry, perhaps?

Husband: No, there was nothing like that. Do you decide that, even with all your knowledge of birth control? (Laughter). It is God’s gift. Unfortunately, we lost one, actually the child that would have been the fourth, we lost him.

Wife: I had a son who later died: Nnaemeka. Then Okechukwu came, then Ngozi (Chimamanda) and Kenechukwu. I had Uchenna and Ijeoma in the USA. Six weeks after I had Chuks, Aba fell. I was to go for a medical check-up on a Monday. But we ran away from Aba on a Sunday.

There were roadblocks at the time, so we couldn’t get to Orlu. We were stopped on the way and we slept in the car. It was like they placed a curfew or something. We stayed there until daybreak; I wrapped my son in clothes to protect him from cold. It was not until the following that we got to Ezike’s house.

Ezike was a one-time bursar of the University of Nigeria, Nsukka. He studied at the University of İbadan with my husband; in fact, he was his best friend. We stayed there for a while and he got us accommodation in the house of his in-law. I could remember during the war, we would go to the refugee camp to beg for stockfish, egg yolk and milk for the children.

What challenges did you face in marriage?

Wife: Marriage is not a bed of roses. It involves give-and-take. Some mornings you’ll get up on the wrong side of the bed, but one important thing I find sustaining in marriage is love, understanding, caring; you care for one another, you appreciate one another; you appreciate that you are different individuals.

Each has his or her likes; you don’t want yours to override the other; you are accommodating. You could have disagreements, but you try to reason it out and everything would be solved. So, anybody who will tell you that marriage is just love, love, love, it’s a lie because you have days you may quarrel but after quarrelling you make up. But make sure that whatever problem you have is kept within your home.

You don’t go inviting outsiders because when you do, you have ruined your family. They will intervene but the stories they will tell outside may not be what actually happened in your home. So I think that the main ingredients for a successful marriage are love and understanding. You should have the ability to forgive and these qualities should be symbiotic for both man and woman.

The days have gone when my father’s generation would tell you that he is the man of the house, and things must be done the way he says it. It’s no longer that way. At that time, the man was the sole breadwinner and the woman did supporting roles, doing farm work.

But now it is A contributes, B contributes and life goes on. And whether it’s A that brings the bigger share or B, a third person outside there should not know about it. Stay in your house; iron out things between yourselves.

If God gives you children, bring up your children, love them, care for them within your means. Don’t go pinching people’s things or find who you’ll kill to take his purse in order to let your child wear the best shoes around. Living within one’s means is very important in marriage.

SEE ALSO: Chimamanda Adichie Reveals She Didn’t Think She Would Be a Good Mom, Raising Children Amidst Other Issues

When you look at the rate that marriages are collapsing, it makes you wonder whether we are under a generational curse. What do you think is responsible for rampant cases of divorce that we witness these days?

Wife: Well, my view is that frequent breakdown in marriages is due to change in values; people no longer adore high moral values. That’s why I frown at some of the things that have come in the name of westernization. And, if you look around, you’ll see that overseas, some of their marriages are crumbling due to moral breakdown.

Moral values help make the society governable. But it is sad because when I look back and see what the present generation is going through I start wondering where we are heading to because to me it seems it will lead us to chaos. I trust that God will rescue us.

But I also know that God helps those who help themselves; you don’t climb up a tree and leave your hands calling on God to help you not to fall. It is not possible. The law of physics will not let that happen. So I think that we as a country need to do something, and fast too.

We still go back to this issue of values. It depends on what one wants in life and marriage. If as a woman, you set out to marry a rich guy, I think that’s not a very good attitude or view. Wealth should come later. You should marry a man who has integrity, who is honest. When you get these two qualities, he could be a very wealthy guy; he could be struggling like many of us.

I have in my little experience observed that those who set out to catch a rich or wealthy man, some of those marriages don’t last because they married money, not the man. That’s why I say it is important for the young man and woman to understand each other before they walk into marriage.

Some of them meet today and in another one month, they are married. There is no period of courtship; none of them knows the other. They now interact when they are already married and living together; that’s when each starts discovering the true nature of the other. That’s not good.