Dear MIMsters: Why Is My Husband’s Side Chic Still Stalking Me

There are quite a lot of heartwarming stories out there about people with different disabilities defying the odds. So many that Leigh Merryday Porch, mom to a 10-year-old autistic boy from Florida, felt the need to share her side of the story in a Facebook post that has now gone viral.

Merryday wanted to particularly address how undiscerning it can be when friends and wellwishers tag parents of autistic kids in ‘inspirational’ posts. According to the mum-of-two, outcomes are not the same for all special needs kids, however much their parents try and it almost belittles the toil of a parent who has a different outcome from the one shared with the intention to motivate.

Merryday admits on her Facebook page how terrified she was some 8 years ago as mum to a toddler whom doctors had just diagnosed with autism. She told People in an interview;

“the accomplishments are beautiful, what’s disturbing are the lessons people try to take away—that if you just follow the formula someone else did,

that any child with a disability can do the same. It’s oversimplified and ultimately hints that any other outcome is less worthy.”

READ ALSO: 6 Straightforward Tips For Parenting A Child With Autism

Citing some of the messages that people share with parents who have autistic kids, Porch shared that while she, like many others, appreciate the beauty of strength in the face of adversity, inputs in such stories that read something like; “When experts told her her son would never talk, never have friends, never graduate, she declared ‘Over my dead body.'” are not inspirational for everyone.

“If you have an autistic child, you’ve seen the stories. Friends tend to tag you in them or PM you to share.

They’re stories of autistic kids who didn’t talk but do now, children who sing the national anthem, young women who compete in beauty pageants, and those on the spectrum who graduate from college.

And you don’t mind the stories, because human beings persevering in the face of adversity is a beautiful thing.

But invariably, somewhere in the story is a quote that goes something like this:

“When experts told her her son would never talk, never have friends, never graduate, she declared ‘Over my dead body.'”

Those quotes are all sorts of inspirational – for some. But if you have a child whose disability is severe, such quotes are felt like a slap. Because some disabilities cannot be overcome.

They can be accepted, worked with, planned for, and accommodated, but no amount of parental love and determination can erase them.

Callum is not going to go to law school. He’s simply not wired for that, and I can’t rewire him. The fact that I can accept that and love him unconditionally does not reflect him having not been raised by someone willing to try harder.

Because – over my dead body – will he be relegated as somehow less worthy for not doing the unexpected and unrealistic.

The presence of an autistic adult in the world who doesn’t make the newspaper is not a statement of failure.

Not of society, not of his family, and certainly not of himself. And other than steadfastly insisting he be given every reasonable opportunity any other person has to live, learn, and grow, no other declarations need be made – and no dead bodies required. 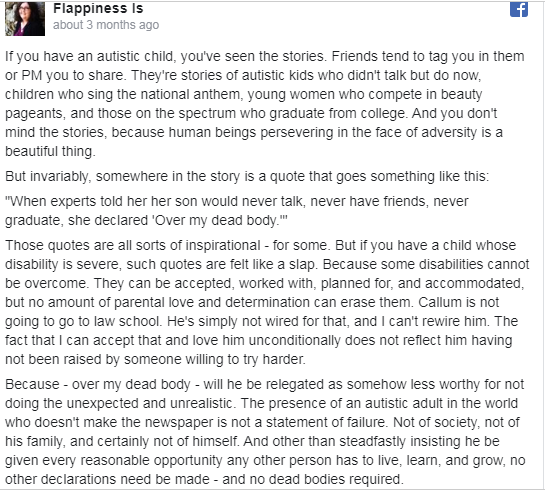