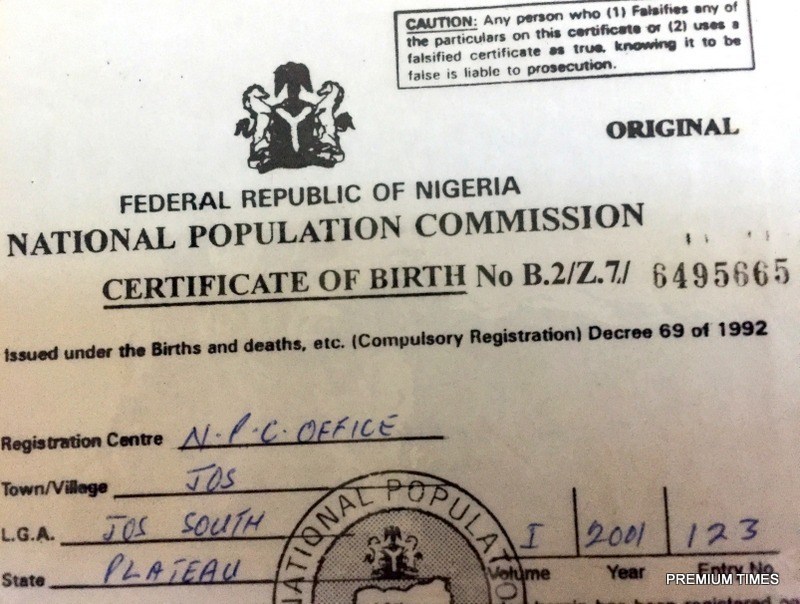 This is a question every Nigerian parent should be able to answer. If your answer is a Yes, and the issuing authority is the National Population Commission, NPopC, such document is legally recognised.

If your answer is a No, the implication is that the birth of your child was not registered and that child is not recognised as a bonafide Nigerian citizen.

In Nigeria, only 30 percent of children under the age of 5 have had their births registered. According to the RapidSMS, a data tracking tool that collects and collates real-time information using Short Messaging System (SMS), a total of 3,059,072 children aged under one year 1,509,091 girls and 1,549,981 boys were registered at birth in 2018.

No less than 70 percent of children born in Lagos do not have their births registered, according to data from the NDHS 2013. The profile of children whose births are not registered in the State shows that there is no official record of the full names, parents, place of birth, date of birth, and their Nationality. As a result of this, their access to basic services is under threat.

The Lagos State government is, however, hoping to register the births of 1 million children in 2019. Records show that there are currently 122 birth registration centres in the State, each manned by a Registrar that writes and issues a birth certificate on presentation of the necessary requirements by the informant.

Every child from age zero to 17 years is entitled to be registered and issued a birth certificate free of charge. In the views of UNICEF, Child Protection Specialist, Mrs. Sharon Oladiji, “Birth registration is the first step towards recognizing a child’s inalienable right as a human being.

Oladiji, who spoke in Ibadan at a forum organised by the National Orientation Agency (NOA) in collaboration with UNICEF, on the need to scale-up birth registration in Lagos State, said:

“Birth registration is the official recording of the birth of a child through an administrative process of the state and is coordinated by a particular branch of government.

She decried the threat to the rights of over 1.4 million children in the state, calling for an expansion of birth registration services in all LGAs with prioritization of interventions to accelerate progress, especially amongst the poor in rural areas and among socially disadvantaged groups.

“When a child is not registered at birth, there is no official record of his/her full names and that child will not have access to basic services,” said the Head of Department, Vital Registration, Department National Population Commission, NPoPC Lagos State, Mr. Nwannukwu Ikechukwu.

He said to scale up the number of registered births in Lagos, the Commission plans to create an additional 26 centres across the State. Nwannukwu notes:

“When birth registration data are correctly collected, they can, therefore, play an important role in the planning of a country’s economic and social development.

“Registering the child will enable the government to plan and implement basic social services (health, education, employment, etc.) monitor,, evaluate, and report on the impact of its social and economic policies.

“It will also ensure that resources are allocated to where they are really needed within different geographical areas or different groups in society.”

Further, Nwannukwu blamed the low birth registration rate in the State to myriads of challenges including lack of suitable offices for comptrollers and registrars; touting of birth and death certificate; the unhealthy rivalry between Lagos state council staff and NPoPC registrars among others.

The HOD, however, emphasised the importance of improved service delivery, identification of barriers and bottlenecks, forging community-based approaches and encouraging innovation as the solution to the identified problems of the weak birth registration system.

He urged the State government to employ more ad hoc Registrars, to enable the commission to cover more areas, especially in hard to reach communities within the state. Provisions in the current legislation for birth registration make it mandatory.

The Federal Government’s decree No. 69 of 1992 on vital registration states that registration shall be carried out free of charge, within a period of 60 days from the date of birth. Birth registration is the continuous, permanent, compulsory and universal recording of the occurrence and characteristics of birth.

The exercise is free nationwide for children aged 0-17 years. According to the RapidSMS, a data tracking tool that collects and collates real-time information using Short Messaging System (SMS), in 2018, 175,912 children under one year were registered to comprise 86,497 girls and 89,415 boys while 308,529 Under fives comprising 155,031 girls and 253,497 boys were registered.