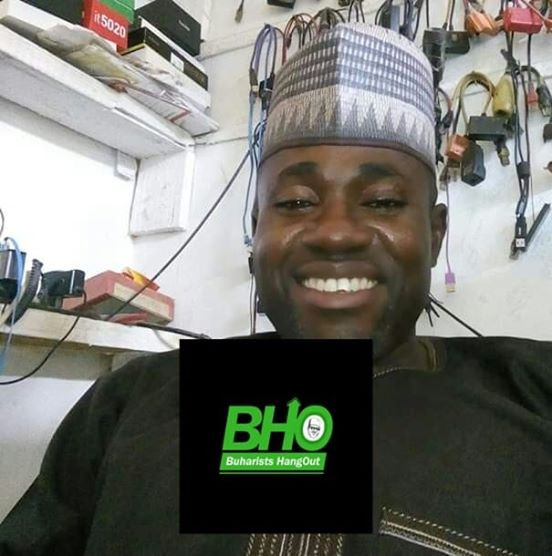 Dear MIMsters: How I Went From Being A Rejected Single Teenage Mum To Becoming A Successful Registered Nurse / Midwife

The unrest in the household of Nigeria’s First family is still generating reactions from across the nation. As reactions continue to trail the drama in the Aso Villa, a staunch President Buhari supporter, Ibrahim Ali Gombe, took to Facebook to pen a lengthy open letter to Mrs. Aisha Buhari, asking her to not embark on a battle she cannot win.

Recall that the First Lady made public her displeasure with her husband’s uncle, Mamman Daura and his immediate family who share the Presidential Villa with the First family, read more here.

Now a committed supporter of the President has penned an open letter to the First lady asking her to cease fire. He warned her to be careful, saying the president’s uncle had been very gracious to her family by sending her children to foreign universities and that it was only natural that the president show gratitude to such a selfless uncle.

‘If Feminism Is Your Vision, Don’t Get Married Because…’ -Bishop David Oyedepo Talks Tough On The Feminist Movement

He reminded the First Lady that she only became a part of the extended family in 1996 and so cannot start a fight. He admonished her to be patient, humble and gracious.

‘My Advice to Hajjia Ashia
My dear First Lady
Be careful! Don’t embark on a battle you cannot win. Some battles are not worth fighting. It is better not to fight, at all, than to fight and lose. Losing such a battle would have unravelled your invincibility.
Those feminism, buharists, you think that are standing or whispering all you want to hear about About ur extended family are doing all this all because of their selfish intrest of what they want to gain from you not certainly because of you or your children.
Mamman Daura is your husband’s closest uncle, Fatima Mamman, no matter how young she is, she remains your child . They are your in-laws. Show some respect. They are your husband’s family. They are an integral part of your family. They are not strangers.
Mamman Daura and Abba Kyari (Chief of Staff) are two personalities you cannot push away from President Buhari, your husband. Fine, you’re his wife; however, what these two have contributed in the life of your husband is inestimable and unquantifiable. Buhari is Abba Kyari. Abba Kyari is Mamman Daura. Mamman Daura is Buhari. They are inseparable.
When IBB, Overthrew your husband as Head of States , locked him up in the prison for not less than 3 years, it was Mamman Daura and Abba Kyari were there for your husband in the prison . When he eventually regained his freedom without no benefits as a previous head of state , mamman daura placed your husband on salary through his companies payroll, so that your husband can still stand as a man in terms of fulfilling his responsibility as a family man without begging friends and relations for financial help.
They staked everything for the success of your husband. Your husband knows and appreciates their contributions. No matter what anyone says, Buhari will not leave them.
I don’t know of any individual who has contributed, financially, morally, spiritually and physically to the success of your husband and family more than them. The journey among the trio of Buhari, Mamman Daura and Abba Kyari is a journey of more than 40 years, even before you came in as a wife.
After all, you just came in 1996. Cool down enjoy your marriage and also enjoy your post as the First Lady of this country.
That your children were oppurtuned to be educated in good foreign universities are one of the numerous courtsey of Alhaji Mamman Daura and Abba kyari.
Have you also forgotten, when they will sponsor your trips to Overseas for Vacation , just to make sure that they is a big smile on the lips of their young Admirable wife.
My dear First Lady how many Nigerian Women are oppurtuned to have such in-laws, the Answer is 99.9% women are not oppurtuned to have such in-laws, this shows how blessed you are.
In 2003, 2007, 2011 presidential campaigns, Abba Kyari was your husband’s chief financier. They risked everything for your husband.
They belived in the man Buhari, even when he kept on failing his elections. It is the outcome of that risk they took that you are enjoying today, as the First lady. Indeed, God has used them for you also.
That your husband wants them around him is a sign of gratefulness. My dear First lady, have you also forgotten tht before your husband became the president, that Muhammadu Buhari spent most of his evenings in the house of his best friend and uncle mamman in daura .
It is on record that any one that wants to see d old General, once it is 4pm goes straight to mammans house, because it is already a known tradition that baba Buhari must be there as far as he is in Daura.
That Buhari wants him around him in the villa is a clear manifestation that Buhari is not an ingrate. He appreciates favour. Thus, he will not pay favour with ingratitude.
One thing is certain, the Buhari we all know will not trade his trusted allies for anything or anyone. This also shows that your husband Muhammadu Buhari can never trade you for another woman unlike most Men in power and Generals always do. This also shows how blessed you are.
Aso Villa is a temporary residence. In the next four years, you will pack out. Life in the Presidential Villa is transient, ephemeral and short-lived. Don’t be overwhelmingly obsessed with it. The Villa is not a family house and it’s not your husband’s house.
Soldier go, soldier come. I was a bit emotional few days ago when Goodluck Jonathan visited Buhari in the Villa. Many changes have been effected. Buhari was the one showing Jonathan the way. Imagine. A place Jonathan just left in 2015.
Hajjia Aisha, if anything is wrong, which you don’t feel comfortable with; amicable resolution is the way-out .
You need not fight anyone or take anyone as a foe. Show love. Show respect. Show tolerance. Mamman Daura’s children are your children. Show no discrimination or animosity.
What goes around comes around. No one knows tomorrow. Those we meet in the course of climbing the ladder of life are the same people we will while coming down. Once again Remember your Root and where you started.’

See the screenshot below 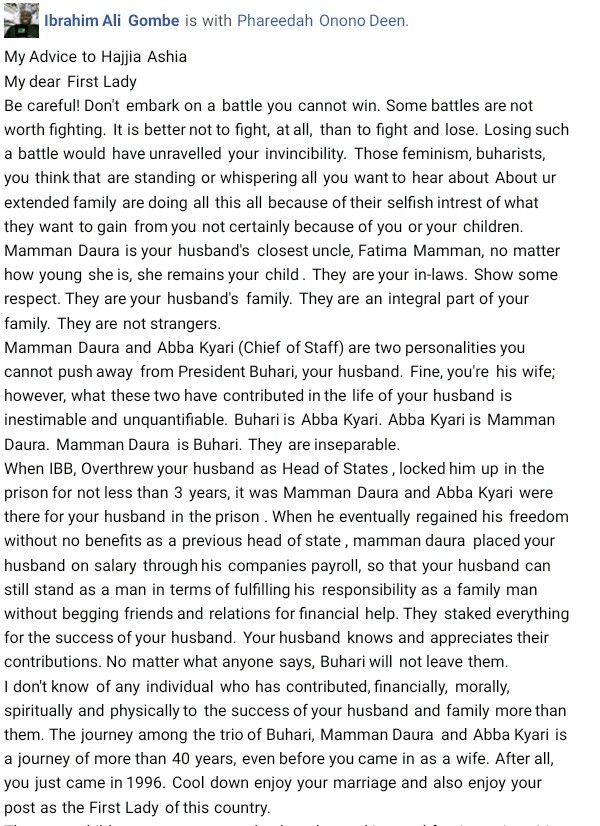