Duchess of Sussex, Meghan Markle Gets Candid About Having To Deal With Negative Press Since Becoming A Mom | WATCH

The controversial nature of the issue was again laid bare recently when a torrent of criticism trailed an incident involving a student of Faith Academy, Ota, Ogun State, David Emekeme who was beaten to pulp by his teacher.

According to media reports, the victim, an SS2 student of the school was terribly beaten by a Computer Science teacher in the school, Voke Voma, who accused him of walking slowly in the chapel. 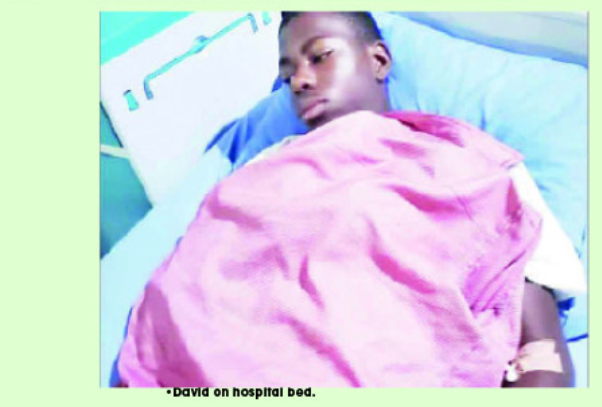 As would be expected, the horrific incident raised dust in various quarters. Many people who heard about it slammed the teacher for recklessly flogging Emekeme with a belt, to the point that he became unconscious and remained so for three days.

Some parents who spoke with Sunday Sun stated that such abuse of corporal punishment is primary reason they frown at it. A parent, Ezekoli Amarachi told Sunday Sun:

“I am not against teachers rebuking my children in the school if they go against an instruction or laid down rule. However, I don’t tolerate corporal punishment from teachers or members of the school management because most times, they abuse it.

The way some teachers administer punishment to students would make you wonder if they are humans at all. So, I don’t welcome the idea of corporal punishment because it affects the students more negatively.

Imagine a student that would be subjected to severe punishment in school and be useless to himself when he gets home from school.”

Also speaking, Mrs. Olajide Funke stressed the need for teachers to always control their anger while administering punishment on pupils, to avoid situations where pupils are badly injured by their teachers in the process of correcting them. She said:

“No reasonable parent will frown at a teacher showing their wards the right way of doing things. All parents desire the very best for their children. The challenge has always been the manner with which some of these teachers punish our children.

Most of them out of anger and frustration inflict heavy injury on their students in the name of punishment. Do we call such an act a corrective measure or an act of wickedness? So, we expect more from the teachers. Most of them are parents too and they don’t punish their own wards the way they treat other people’s children.

Someone like me won’t condone a teacher brutalizing my child in school in the name of correcting him. Teachers should be humane in administering punishment to their students. They should know that at such young age, they are bound to make mistakes over and over again.

There should be that love even when punishing them to make them remorseful for a wrong. In some schools, some teachers are every student’s nightmare. This ought not be. If teachers employed to teach students become threats to those they are expected to groom into better human beings, where is the logic?”

The practice of teachers punishing students for alleged violation of certain rules is not new. However, with increasing backlash trailing the use of corporal punishment in schools, teachers are becoming increasingly handicapped in administering punishment to erring students.

The situation, according to information gathered, was largely due to directives from school management to relax punitive measures on defaulting students to avoid anger of parents.

One of such teachers is Ikechukwu Anyanwu, who teaches Economics. He said that it has become difficult for teachers now to punish students for fear of attracting the anger of their parents and even that of the school management. His words:

SEE ALSO: Little Boy, Edward Cortez’s Letter To His Teacher Who Queried Him Over Not Doing His Homework Will Leave You In Stitches

“This is one of those difficult periods to be a teacher. We are getting to situation where teachers who are custodians of their students no longer exercise full authority over them. A situation where you see a student going wrong but punishing such student scares the teacher because of what might happen. This is what is breeding lawlessness in our schools.

Actress, Debbie Shokoya Reaches Out To People With Low Self-Esteem With This Empowering Message

Most teachers are now being careful, especially when it comes to beating students. I nearly escaped such situation recently when I spanked my student for running foul of instructions given to the class. Because of that, I have stopped using cane to punish my students and that has worsened the situation.

Some of them now misbehave knowing full well that no heavy punishment would follow such misconduct. We appeal to parents to reconsider their stance on the use of corporal punishment in schools.”

Also speaking, a Mathematics teacher, Ngele Peace, said that being moderate in administering punishment to pupils has become every teacher’s watchword. She said:

“We don’t forbid use of corporal punishment outright, in schools. The emphasis has always been to apply moderation when doing such. But such only leaves many teachers handicapped. When a teacher becomes scared of administering punishment to his or her student because of the consequence that may follow such action, then immorality would become rampant in the society.

“Parents should cooperate with teachers, to bring out the best in their children. Seeing a student successful is always every teacher’s delight. As such, parents shouldn’t attempt to cow teachers that punishing their wards is a crime.”

SEE ALSO: Shocking! See How a Student Was Beaten for Reporting Her Teacher to Mum

Commenting on the issue, a cleric with the Redeemed Christian Church of God, Deacon Samuel Idowu, stressed the need for increased collaboration between parents and teachers to produce children that impact the society meaningfully.

Observing that parents and teachers need each other’s cooperation to bring out the best in students, he canvassed for more amicable ways of resolving disputes emanating from subjecting pupils to corporal punishment in schools, even as he urged teachers to ensure professionalism in dealing with wards who disobey laid down rules and regulations. He said:

“Every school has laid down rules and regulations. Therefore, parents should encourage their children to abide by those rules. This is to ensure that there is sanity in the school system.

We can’t have children who disobey rules and display bad conduct, and you still expect teachers to be happy. So, it is basically a joint work by both teachers and parents. We all have various rules guiding our homes, same with the various schools.”