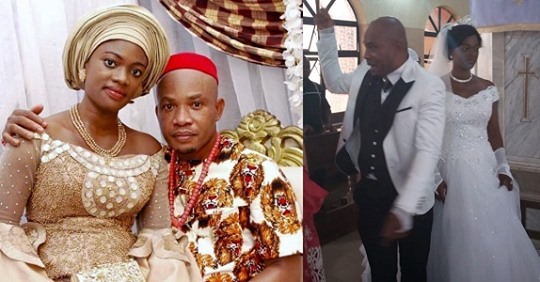 A young Nigerian mum and widow took to Facebook to lament her sorrow over the demise of her beloved husband. The untimely death of her beloved, she claims, was caused by her failure to take her mother-in-law’s threats seriously after the latter warned her not to marry her son and that it would happen only over her dead body. According to the distraught mum identified as Chizoba Favour Chinedu, her mother-in-law has now told her that she – Favour will also bury her young son just as she had buried hers.

The bereaved mum who took to her Facebook account to narrate her ordeal said it was supposed to be the celebration of another wedding anniversary for her and her late husband but under-estimating her mother-in-law’s determination to null their marriage has rendered her a widow.

Chinedu also made it known that her mother-in-law was never in support of the marriage from the onset.

Today is our wedding anniversary my love but I woke up without you by my side to celebrate it, it feels like hell living without you, if I had known that your mother meant what she said I would walked away while you were still alive, when she told my mother as she was leaving from our wedding that she will deal with me, that after she told you not to marry me, you still went ahead to.

I thought it was just a mere word, even when she asked you to divorce me fews hours after our wedding you refused, I wish I read through her heart to see how mean she was �� and you still visited her during Christmas time to beg her to forgive me and let’s live like family and she said over her dead body will she live to accept me as a daughter inlaw,

I wish I understood those words ��, I wish I never underestimated her, I would have simply left and by now maybe we would have been celebrating it over the phone now but I called you and your right rang right beside me ���, the pain is too much, the thought of your death is making me lose my mind, the beautiful family is planned together has now fallen, the landlord has given us quite notice, your beloved son is out of school and in the midst of it all I am so confused because I don’t even know where to start from��� here, where are you my love

I want hung you once again �� I want to hold your hands, I want you to look into my eyes and tell me that everything is going to be ok��, your family and friends that supposed to help, your mother told them that I killed you, maybe she’s right, she thought that am the one that will die but you took the bullet for me, you died the death that was meant for for me��� because of your heart of gold, you loved your family without reservation but they were opposite to you, even at your last hour you said that if any happen to you that your mother will not survive it because you were her only son but Honey she did and she also said that as She buried you that I will bury our son too.

I know can hear me, I know that you can see me��, defend us this day my love. I have not been able to write about you since you left because I thought you travelled and will soon be back �� but as day passes by I find out you are really gone for good.

I love you and will forever do because you will always live in my heart. With pain in my heart and tears � in my eyes I say happy anniversary to us my king, my friend, my teacher, my boyfriend, my brother, my mentor, my father and my husband, you were everything to me. I miss you, our children miss you, the Saint Vincent the Paul miss you. 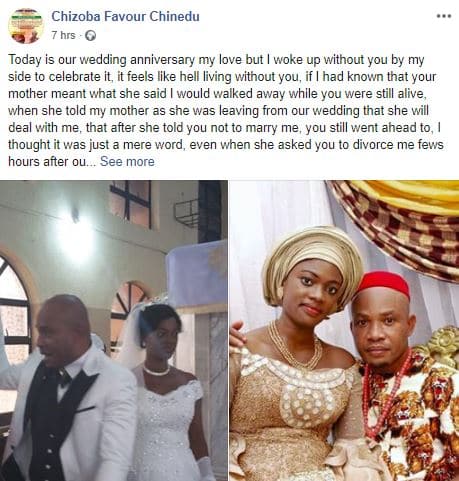