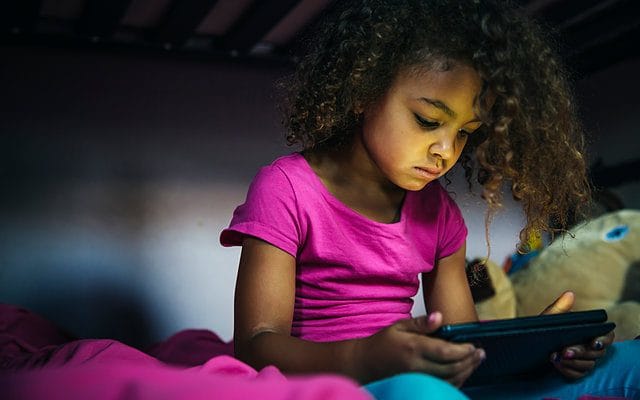 Most people understand addiction to mean an unhealthy fixation on narcotics, sex, gambling and outright vices. However, an addiction is basically compulsive engagement in an activity for rewarding stimuli despite the adverse consequences. All addictions work the same way and that’s what addiction expert, Mandy Saligari hopes parents can understand when they make a habit of handing their kids’ phones to keep them busy or entertained.

While smartphones aren’t outrightly harmful like narcotics (although they emit radioactive energy that may be harmful in the long run), but for toddlers, they are easily destructive. You’re training that child in such a way that when you take away the phone, they spiral into withdrawal and begin to lash out. There are many dangers here including your toddler refusing to feed, sleep, play or interact with his physical environment at the appropriate times because they are engrossed and have become fixated on phone contents. Apart from the fact that several studies have linked screen time to slower development of speech and other cognitive abilities.

“Giving children smartphones is like ‘giving them a gram of cocaine,’

argues parenting coach, Mandy Saligari, a rehabilitation specialist at Harley Street, a drug and alcohol clinic in the UK.

According to the Independent, Saligari recently spoke at a conference in London, and explained that popular apps like Instagram and Snapchat can be just as addictive for teens as drugs and alcohol.

“I always say to people, when you’re giving your kid a tablet or a phone, you’re really giving them a bottle of wine or a gram of coke.

Why do we pay so much less attention to [smartphones and other devices with screens] than we do to drugs and alcohol when they work on the same brain impulses?”

The problem, according to the expert, is that many of us, both parents and teachers, fail to realise – and flat out underestimate – just how addictive digital technology is to children – especially between the ages of 12-15.

Maybe more worringly, Saligari explains that when it comes to smartphone usage among 13- and 14-year-old girls, many of them believe it’s “completely normal” to send nude images of themselves—and that it’s only “wrong” if a parent or adult finds out.

Restricting screen time and the use of smartphones are important measures to take, and families should openly discuss technology and how it can affect us in positive and negative ways.

In regards to sexting among teen girls, Saligari stresses the importance of discussing and teach self-respect at home, frequently, something she claims will make these girls “less likely to exploit themselves in that way.”