A Nigerian entrepreneur, Mark Essien has advised his followers on what to do to achieve their wildest dreams. The twitter user shared a series of posts on the popular micro-blogging platform, teaching people on the steps to take.

Essien noted that his post is not for people who set their sight on low goals because they don’t believe they can achieve their wildest dreams.

The entrepreneur explained that the first step is setting the right goal without being afraid of the risk. He then shared the story of a man who bought houses for his children and one benefit more than the other because he was not afraid.

According to him, the second step is to move with people that would help you move forward. He explained that people need to connect with those that are higher than their level so they can achieve the highest level.

The third step by Essien was on skill-building. The man advised people to learn several skills and make it their own.

The fourth step according to Essien is to leave no room for discouragement. He said people need to keep moving forward no matter what happens.

He said once the goal is achieved the fifth step is to start working hard to get to the next level by challenging yourself. Finally, he advised people to speak up and never be afraid of getting into trouble.

Read the full thread below…

”For all of you who don’t believe you can ever live in Eko Atlantic, but are telling yourself, let my #goals be iyana ipaja, let me give you some tips how you can achieve it.

Step 1: set your goal right. I know a man who was very wealthy. He called his sons and told them: I want all you to have houses. Pick a house, I will buy for you. But you will repay me monthly for the house till you have paid it off. One Son picked a house in Yaba. One in Ikoyi.

You must set the goal to where you want to end up. Without this, forget the rest. This is just your mindset, but mindset determines the rest.

Every Day, do the work to connect with someone on a one-on-one basis who is ahead of you in any way possible (not necessarily your field). If they don’t want to connect with you, bring gifts. Show you are serious. Don’t ask without giving. Offer to help.

READ ALSO: Proud Son, Stan Celebrates Mom Who Achieved Her Dreams Against All Odds With These Words

And as you advance, go for more challenging people to talk to. People you never imagined could be your friends. Show you are trustworthy. Opportunities come from people, not from hard work.

Step 3: Build a (or multiple) skill to be better than 95% of people. Being you is not a skill. Whatever you do, be so good at it that it will take years to train your replacement. You are only as valuable as what you can do, and how quickly someone else can do it.

Step 4: Keep trying. Leave discouragement from your vocabulary. If you want a job, you apply 10x a day. You don’t keep stopping, you keep going. Be like the Terminator, once you start, you cannot be stopped. Take a small step first, someone achievable.

Step 5: once you have achieved that goal, then start working hard to get to the next step. Found a job? Once you stop learning, start trying to find a better one. Challenge yourself to be better next month than this month. Be like Oliver Twist: want more.

Final Step: speak up. Never hide, hoping that saying nothing will avoid trouble. Look for trouble and speak up. Where you work, among your peers, in rallies. Get noticed. Do not be a silent friend, stay top of mind for people who can help you.” 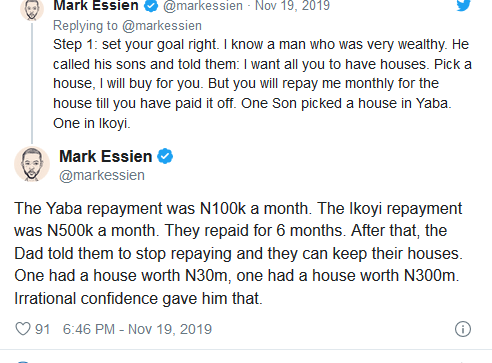