A 15-year-old girl has completely blindsided her parents and taken her own life but her suicide note is an eye-opener; one that reveals it was her parents that first blindsided her. The heartbreaking note left by the teenage girl showed that she bore torturous abuse right under the nose of her seemingly doting parents, and while she praised them for their love and generosity, she highlighted how their negligence had sent her down the dark alley.

From her note, it appeared that her parents were not around often, and if they were, they failed to really talk with their children or commit to deliberate parenting by playing and conversing with the children.

It turns out, a predator was lurking in their home. The brother of the deceased’s mother noticed how superficial the relationship was between his sister and her children and he swung into predatory mode, offering companionship and friendship that the 15-year-old lacked from her parents.

By her note, the predator whom she called ‘Uncle Tony’ successfully ‘groomed’ her and thereafter, began to consistently molest her sexually from three years earlier and her heartbreak stemmed from the fact that not once did her parents suspect that all may not be as should be with her. The sheer lack of awareness further proved to her that her parents did not pay much mind to her, causing the teenager to yield to her anguish.

Read the teenager’s note as shared:

“Dear mom,
It’s with a heavy heart that I write you this note, knowing the amount of pain it is going to cause you.

Mom, I want you to know that I love you dearly and will ever love you. If I am given the opportunity to live again I will still choose you as my mom and our family will still be my place of birth.

But unfortunately, I know that there is not going to be any such opportunity.

Mom, I didn’t want to do this, but I was compelled by circumstances beyond my control to take the plunge.

I tried my best to pull through, but my best was not good enough. I battled alone for about thirteen months now until my strength failed me.

You and dad could not decipher what I was going through and maybe I should not blame you for that.

My one and only brother came very close to understanding what I was passing through but it was too much for his young mind to comprehend.

Mom, I know that you and dad loved me and did everything you could to prove that to me but I was not feeling loved.

You provided for me more than I even wanted, took me to places that most of my mates have not even heard of, yet despite all these, my heart was longing for love.
I needed someone who would love me for who I was. I needed someone who could reach the depth of my soul and feel the vacuum there.

The material provisions you spoiled me with could not do that. And I was alone all the while, despite the fact that we laughed together and had gist as a family.
Then came the last straw that broke the camel’s back.

Your brother, Uncle Tony who came to live with us, made me believe that he knew exactly what my soul was longing for – companionship.
He chose to stay with me when you and dad were too busy to notice my loneliness.

He tried to keep me company when I needed someone to talk to but had only gadgets and teddy bears as my company. I was fooled to trust him and he hacked into my foolishness. And he did it perfectly and deeply.

Mom, your brother raped me and used me as a sex toy for three whole years. I expected you or dad to notice but none of you did.

When he left our house last year I was shattered because I have grown to fill the void of your presence with his dirty deeds.

I couldn’t complain because I was afraid to lose him, but when he eventually left for Canada the magnitude of the emptiness in me became too heavy for me to carry.

I struggled to forget those experiences but I could not. My grades dropped in school and you and dad quickly arranged for a home lesson teacher.

Mom, that singular act instead of helping me fueled what is about to happen to me a few minutes from now.

The home lesson teacher you brought so much reminded me of Uncle Tony and, on several occasions, I felt like grabbing him and making him fill the gap that Tony’s absence created in me.

Mom, I had to do this because I was lonely. Did you ever imagine what I was doing in my room all the time I stayed there alone? Couldn’t you for once have gone out of your way to just spend some time with me so that we could talk?

There are many things I would have liked to tell you but I don’t want to add to your pain so let those other torments be buried with this undignified body of mine.

Please make sure that my brother David doesn’t get to the point where I am now.

Also, tell your friends and colleagues who have children to find out what is happening with their beloved kids before it gets too late.

Many of the things parents do in the name of showing love are not what we the younger ones need.
I would have gone, long hours before you will get to read this note.

But one cheering thing is that David is still there with you. Transfer the love you had for me to him.

My bank details and the passwords to my phones and laptops are all in the piece of paper I dropped in the drawer of your dressing table.

I miss you and it pains to empty the content of this bottle in my hand into my mouth but I am constrained to do it all the same.
Tell dad and David that I love them. Tell our pastor that I will miss his sermons and long prayers. Tell my friends not to envy me.

The letter was first shared on Facebook, see the screenshot below: 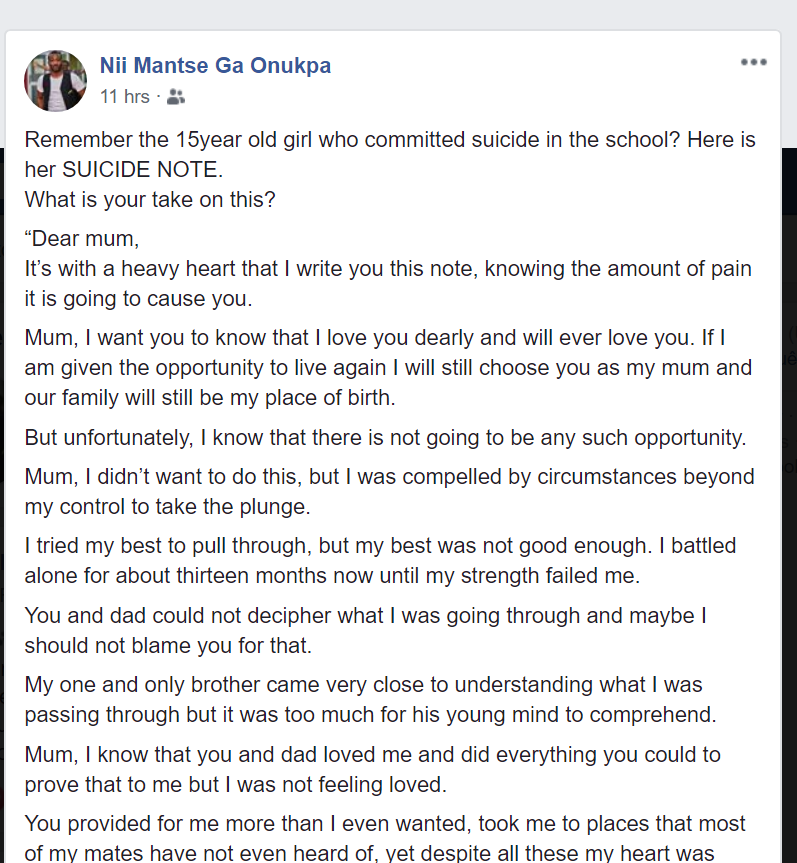