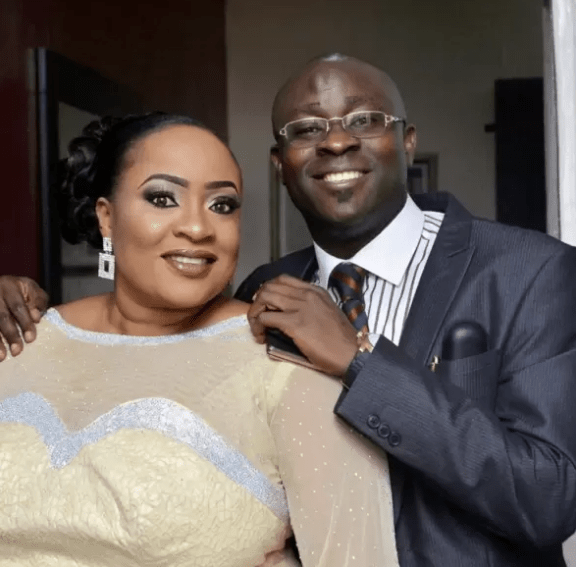 Olukayode Salako, husband of actress Foluke Daramola Salako, has accused a journalist, Olutade Oluwatosin Simeon, of publishing fake news of the dissolution of their marriage that caused the actress and mum-of-two to suffer a miscarriage on Tuesday January 28th.

In a series of posts shared on his Facebook page, Mr Salako said Foluke was shocked by the report that she lost an eight week old pregnancy on Tuesday January 28th. According to him, his almost seven year old marriage to Foluke is still intact and that if there would be a divorce, he would announce it himself.

READ ALSO: How A Breakthrough New Fertility Test Is Offering Hope For Couples Who Have Suffered Miscarriages

“MY MARRIAGE TO FOLUKE DARAMOLA SALAKO IS STILL INTACT.

This latest trending news about our crashed marriage, is nothing, but fake news from the promoters of beer parlour; perper soup Joint; gossip orientation and mentally lazy journalism this time round again.

This is what they keep expecting to happen since I got married to Foluke, but I keep saying it that my marriage to her is purely about God’s project and His own unique purpose for our lives.

Let me use this opportunity to remind those, who are expecting the marriage to go the way of many others in Foluke’s industry, that ours will be 7 years old already on February 15, 2020, and we are still ever committed to continue to run it under the gracious permission and endowments of our creator.

It is beyond me and neither is it not beyond her. If we would ever brake up at all as a couple, we wont ever be available to debunk anything about it at all in the public. It will never, ever be a subject of public issues for another time. It is going to be the reality the whole world would see and wont ever be able to doubt or do anything about it.

I am confirming it authoritatively for the umpteenth time that my marriage to Foluke Daramola Salako is still intact.

We have not broken up. We are not separated. We are still a blessed couple under His gracious stead and divine purpose.

Please, discard the contents of the news making the round about our marriage break up. It is not true! It is fake news and there is no iota of truth in it.

My marriage to her is still graciously intact.

If you want to know anything of the truth about our marriage, you would always hear it or read it directly from me through my social media sources.

Any news about my marriage that is not directly from me; from Foluke or endorsed by us, cannot be true in its entirety. It is gossip news! It is irresponsible journalism! It is fake news!

There is no marriage without its own peculiar challenges. If they say ours is facing challenges, It is normal. But, all along, I have not complained to the public and neither have I cried to any social source that I ever regret anything about it.

This trending one is fake news!

My wife is a very responsible woman and wife that I can always come to the public to vouch for. She is not in any secret or open affair with any popular politician in town and neither is she a bad luck to me.

For now, I am very okay with her and I urge all well meaning Nigerians and her fans around the world to continue to pray for her as she keeps working hard to continue to sustain her marriage.

However, every negative thing you might be reading about us right now on social media, is never what the true situation is all about.

Please, discard it as untrue as usual.

It is not true and it is not from any responsible source I can identify with.

Let me restate it that anything you did not hear or read from Foluke’s source or my source about our marriage, may not be the true situation of it, unless we approve of it or authenticate it or say it by ourselves.

However, any day there is any reason at all for Foluke and me to break up, we would be the ones to announce it by ourselves, and not through any unauthorized, malicious and crude sources.”

Posting these photos of the journalist he accused of publishing the fake news of their divorce, Mr Salako wrote:

“This guy just confirmed to me that he was the one who wrote the story, but only used Femi Adepoju’s platform.

His name is Olutade Oluwatosin Simeon. He is a journalist that I personally know.

I have known him for many years.

Two Celebrity Mums Speak Out About Postpartum Hair Loss: Here’re What Other Moms Need To Know

“Mr. Salako you are a fool. You are a big fool! I wrote the story, not Femi Adepoju. Go and do your findings very well, you will know I am the one who did it. I only used Femi Adepoju’s platform…”

What does he want to achieve by making Foluke Daramola Salako lose another pregnancy this morning again?!

My wife just informed me this morning that she has lost the pregnancy again!

She has been psychologically devastated since the news broke out yesterday morning.

She cried all through the night and she lost the pregnancy she had been growing for more than 8 weeks this morning.

Some of these ‘irresponsible’media people have been attacking our marriage since the 7 years we have been living together.

Do they want to kill this poor girl?!

Or is she the first woman that would marry in the circumstance she married me?!

There a lot of big men we are celebrating in Nigeria today that also left their first wives for their own reasons to marry another women and today, they are doing well together.

Why Foluke! Foluke!! all the time by these media boys?!

My last on this issue on social media. 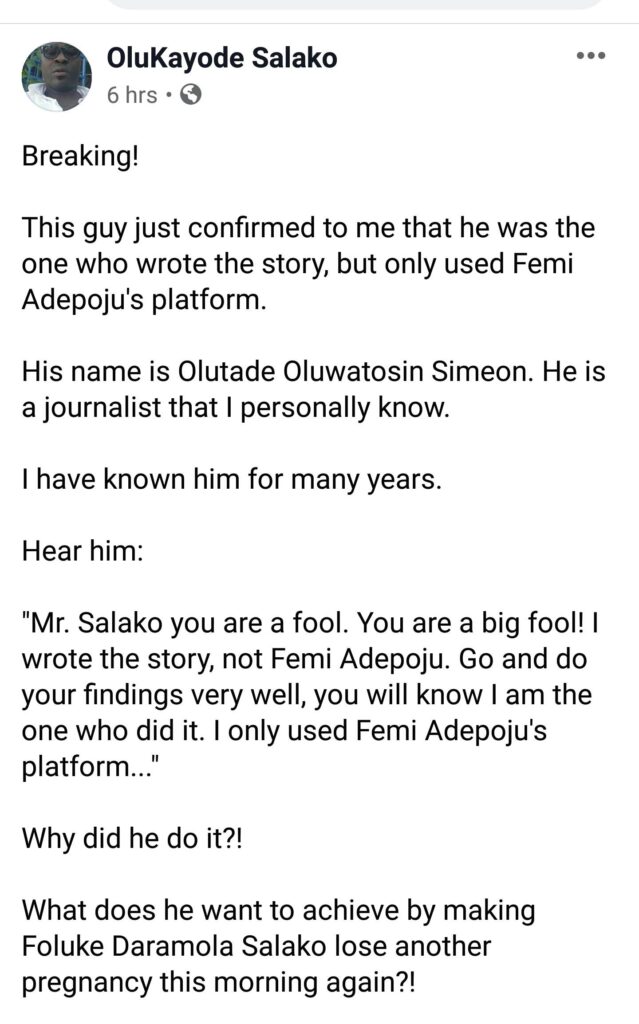 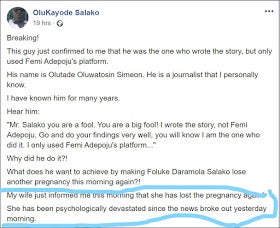