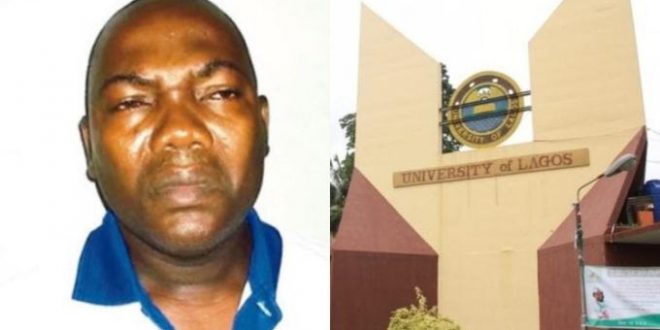 A former lecturer at the University of Lagos, Akin Afeez Baruwa, who raped an 18-year-old admission seeker has been sentenced to 21 years imprisonment on one count of rape by Justice Josephine Oyefeso of the Lagos State High Court.

According to reports, the victim scored 211 in the Unified Tertiary Matriculation Examination and nursed the ambition of studying Mass Communication at UNILAG. After she failed to meet the varsity’s cut-off mark, her father approached Baruwa for help. Baruwa, a former part-time lecturer in the Department of Accounting in UNILAG, reportedly agreed to help and took the victim to the school on July 23, 2015.

He, however, raped her around 9.25am in Room 8 at the Faculty of Business Administration Annex. The victim was said to have reported to her parents, as a rights group took up the case, which led to the arrest of the suspect. The case was later charged to court.

Delivering her judgement on Thursday, Justice Oyefeso held that the convict understood the gravity of the offence and the consequences of his action.

The offence committed against this young lady was a violation of her chastity which would have left huge emotional scars from which I pray and hope she will recover.

I cannot begin to imagine the physical and mental trauma she has had to endure from the man who she considered her father’s friend, a community leader who should have known better. This is a shame!

More painful here is that the convict gave the family the impression that he was a lecturer at Unilag but his services were only needed on an ad-hoc basis by the university.”

She said that the convict gave the impression that he could assist in giving his victim university admission where as he could not. She held…

“He used the vulnerability of this young girl to his selfish advantage.

The young lady said that the encounter lasted for two to five minutes, the convict said 10 to 15 minutes. Was it worth it at the end of the day?

In line with Section 258 of the Criminal Law of Lagos, 2011, Baruwa Afeez Akin is hereby sentenced to 21 years’ imprisonment,”

Earlier, Oyefeso said that the prosecution proved its case beyond reasonable doubt and that the medical evidence was consistent with the testimony of the victim.

“It is interesting to note that all the graphic details he gave in court in his testimony were not contained in his statement at the Surulere Police Station.

The difference between his statement and his evidence are like night and day. DW1 (Baruwa) has a fertile imagination and is not afraid to use it.

The evidence before me overwhelmingly shows that the sexual intercourse between PW3 (complainant) and DW1 was not consensual; I so hold. The court is satisfied that the prosecution has been able to prove its case beyond reasonable doubt.

I find you Baruwa Afeez Akin guilty of a one-count charge of rape contrary to Section 258(1) of the Criminal Law of Lagos, 2011, and I hereby convict you accordingly,” she said.

Before the sentence was passed, defense counsel, Mr H. I. Omotoba, in his allocutus (plea for mercy), prayed the court to temper justice with mercy and impose a light sentence on Baruwa.

“The convict is broken and highly remorseful of his act. The convict is a married man with children aged 12, 10, four and two respectively.

The convict also has aged parents to cater for. My lord, the convict is also a first-time offender.

We urge this court to temper justice with mercy and impose a lesser punishment on the convict,” Omotoba said.

In his response, the Lagos State Director of Public Prosecutions (DPP), Mr Yhaqub Oshoala, expressed gratitude to the court. Oshoala asked the court to impose a stiff sentence on Baruwa to serve as a deterrent to lecturers who prey sexually on students.

He added that Baruwa was not remorseful during his trial.

“I have never observed such a display of unremorsefulness in a defendant to the extent that he was calling the complainant “jeun tan” (a bad nickname), making it seem normal for a married person to use such an expression.

Neither the state nor the society will condone such bad conduct. There are many students out there who are weak and have nobody to protect them,” the DPP said.

NAN reports that Baruwa was arraigned on Oct. 18, 2016. Four witnesses – the victim, her father, a policewoman and a medical doctor – testified for the prosecution while Baruwa testified solely in his defense.

The complainant (victim) had told the court that her father took her to Baruwa’s home one morning for the purpose of helping her to gain admission into Unilag. She said that while in his office, Baruwa told her to pick up a piece of paper from the floor and forcefully pushed her on a couch and raped her.

The complainant said she was a virgin and never had a boyfriend before the rape that occurred three months away from her 19th birthday.

In his defence on May 31, 2019, Baruwa described himself a community service leader at Abesan, Lagos, and an academic, who worked as a project supervisor at the Distant Learning Institute of Unilag from 2010 to 2015. He told the court that the complainant was his girlfriend and that in the morning of that fateful day, she seduced him twice in his office at Unilag.

“Her hands were all over me and I woke up and looked at her. By then, she had already removed the buttons of her blouse and I did suck her breasts.

“She said she needed to pull her white shirt so that it would not be stained; she had her jeans trousers on. We were romancing each other in that position my lord.

“She told me that she wanted me to have sex with her and I replied that there was no way I could practise unsafe sex with her; this was some minutes past 7a.m,”

Baruwa reportedly said during his defense in court.

He said that on the second occasion, the complainant threatened to cause a scene if he would not have sex with her and that he obliged her out of fear of her carrying out her threat. NAN reports that prosecution had said that Baruwa raped the complainant at 9.25a.m. on July 23, 2015, in Room 8 at the Faculty of Business Administration Annex building, UNILAG.

When the rape came to light, UNILAG, however, put up a disclaimer in respect of Baruwa.