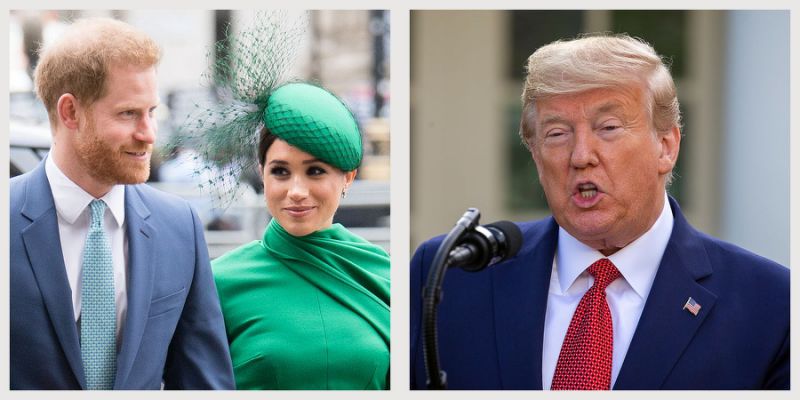 President Donald Trump, two days ago, delivered a bombshell by announcing that the United States government will not pay for the security of British Royals Prince Harry and Meghan Markle amid their reported move to the US from Canada. Trump was reacting to report that the pair have relocated to Los Angeles after their initial plan to permanently reside in Canada.

Despite the long-standing reciprocal agreement between the United Kingdom and the United States when it comes to bodyguards protecting US diplomats and members of the Royal family, Trump announced via his Twitter handle that he will not be granting Meghan and Harry that privilege as they are set to complete the final stage of ‘Megxit,’ meaning they won’t be classified legally as British Royals.

Prince Harry and Meghan have now responded to President Trump, insisting they have no plan to ask him for help with security costs after the president said they must pay. They instead revealed that a privately funded security arrangement has already been made.

‘The Duke and Duchess of Sussex have no plans to ask the U.S. Government for security resources. Privately funded security arrangements have been made.’

A spokesperson for the Sussexes said.

A spokesperson for Harry and Meghan has just told us that “The Duke and Duchess of Sussex have no plans to ask the U.S. government for security resources. Privately funded security arrangements have been made.”

The couple were said to have arrived in the US with their 10-month-old son Archie to start a new life in Los Angeles as they both hope to profit off merchandising while Meghan plans to restart her Hollywood career.

A source told The Sun:

“Harry and Meghan have left Canada now for good. The borders were closing and flights were stopping. They had to get out.

But this move was planned for some time. They realized Canada would not work out for various reasons and they want to be based in the Los Angeles area.

They have a big support network there. It’s where their new team of Hollywood agents and PRs and business managers are based. Meghan has lots of friends there and, of course, her mum, Doria.”