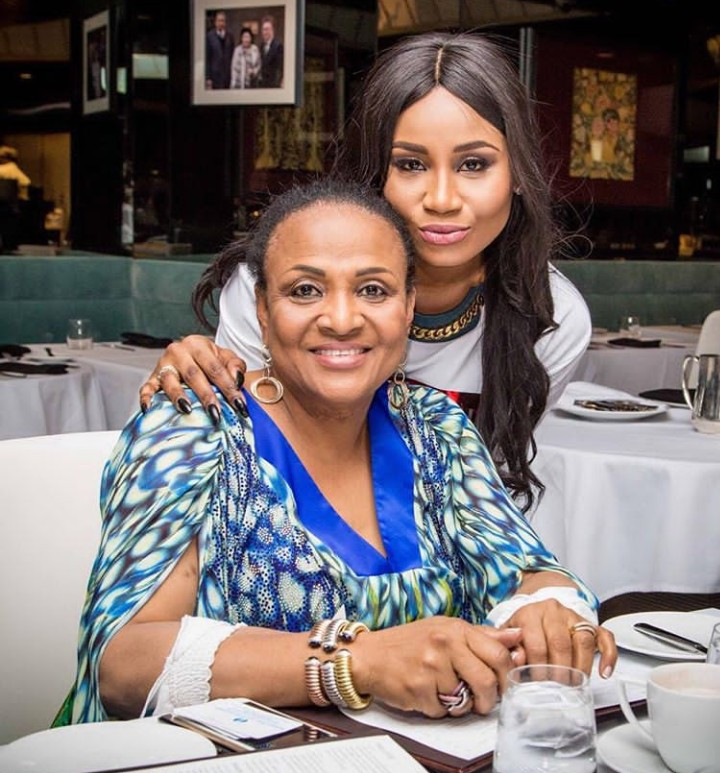 Former Oyo state First Lady, Florence Ajimobi, opened up to her daughter Abisola Kola-Daisi that her husband, former Oyo state governor, Abiola Ajimobi cheated on her multiple times and explained how she handled his infidelity.

During an Instagram Live chat with her daughter, Florence spoke about marriage, motherhood, growing up as a love child, and the only condition under which divorce may be considered.

Mrs. Ajimobi who got married to her husband forty years ago said that she caught her husband cheating on her a few times but she chose to forgive him each time to save her marriage. She also said she never for once reminded him of his unfaithfulness after he apologizes.

READ ALSO: Cubana Boss, Chibuike Okechukwu Has A Litany Of Tips For Wives Looking To Win Their Husbands Over During COVID-19 Lockdown

The video of the interaction between the mum-of-five and her daughter has now gone viral but a lot of younger women on social media argue that she has set the bar a little too low for cheating husbands. When you are done reading everything she had to say, you can make up your mind on what side of the divide you belong to.

“Even on one or two occasions that I’ve caught him cheating, he will apologize. And once he apologizes and it ends, I never go back to them again, I never Bisola, I never ever discussed it.

“Because, what I’m saying is, to err is human, to forgive is divine. We are friends.

“Even as a wife, sometimes I fall below his expectations. Sometimes we do things that is even worse than cheating.”

Abisola who happens to be her first child then asked:

“Like what? What is worse? What can I do that is worse than cheating?”

So, there are different things we do. It is not just cheating that is bad in a relationship. There are some people that you know, they keep dirty secrets and they don’t tell their husbands.

So, if you say somebody is your friend. Why are you keeping things?

Sometimes, when I do something, sometimes, I can’t even face my husband. I send him messages when I know I’ve done something because I don’t want to see the hurt on his face, I just write it down. I send him a text and he replies me that ‘it’s OK, Flory, we can talk about it’.”

When a man is having a relationship with a woman he loves, he’s making love, he’s not having sex.

So if you’re cheap enough, give yourself to my husband. He’s mine. Whatever is mine will not go away. He will use you and come back to me.

I tell people, it’s my leftover you’re eating. He’s my leftover. I’ve eaten the better part of him. I get the chunky meat, eat the bone, it’s none of my business.

And you’re doing it hush hush hush hush. You’re not enjoying it because you’re stealing. You’re looking, ‘is somebody there? Am I going to be caught?’

So, he’s my husband, he can’t go anywhere else…

READ ALSO: Gospel Singer, Empress Gifty Points Married Women Who Need Advice In The Direction Of Their Mothers Instead Of Pastors | Here’s Why

She added that cheating hurts a woman when she loves her husband, but a woman who doesn’t love her husband wouldn’t care what he does.

If you don’t love your husband, you won’t be jealous. A woman that doesn’t love her husband will not care what he does out there. She doesn’t care. Even when you see him, you don’t care.

When I see my husband, you know, ahn ahn, I feel like dying. When I love him so much and I don’t want to be seen as a failure to lose him to somebody else, so I fight for him.

She went on to reveal how she reacts when her husband cheats on her.

Sometimes, I see my husband… I can Google the girl’s name and then I just print out the picture and put it on the bed. When he comes back from work, he sees the girl’s picture on his bed and he knows the girl.

No, I want to keep my home. So, where would I go? I’ll go and be staying alone? When I’ve laboured all these while then somebody will come and enjoy?

Abisola then asked her mother:

“You’re known to be an advocate of ‘no divorce’. At what point can divorce make sense?”

The point where I’ll opt for divorce is when he becomes violent.

But I don’t buy divorce because i look at my background and especially where I’m coming from. I’m a love child, my mother never married my father.

I was born out of wedlock. I grew up with my mum and my stepfather and I knew what it takes . It is not the best for any child.

So, when I got married, I had made up my mind that when I get to the union called marriage, it’s going to be forever.

And i had also made up my mind that there’s nothing the man can do, it’s from his house to my grave.”

Her daughter pointed out that she mentioned she would make an exception if violence is involved, and Mrs Ajimobi stated that for a man to get violent, the woman must have played a part.

But, for it to get violent, I tell a lot of ladies that sometimes, you prompt it. I’m not going to let a man beat me because I’d rather lock myself up and tell him I’m not going to ever come out because I know he’ll beat me.

And he’s not a bastard. You tell a man some horrible things, he gets angry, he gets worked up. So, I want us to learn from that.

We should mind what we say. Because an angry man cannot control himself. Neither can an angry woman control her words too.

So, we sometimes provoke the men to that level. But when you know you’ve done it, don’t let any man beat you for crying out loud, don’t allow it.

Watch a short part of the interview below.