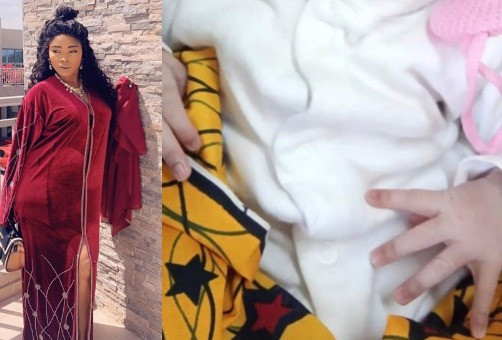 Actress and first-time mum, Halima Abubakar has reacted to the backlash she received after an American mum called her out for using her baby’s photo to announce the birth of her child. Read the initial post here.

Reacting via her Instagram page, the new mum explained that the backlash she has received is proof that people are hasty in their judgment without caring what the person behind a trending subject may be dealing with. According to her, her son has been in the Intensive Care Unit as he was born prematurely.

Concerns for his fragile health were why she did not take a photo of him according to her. She eventually took a photo of her son’s fingers and shared with her Instagram to silence those who are riding on the controversy of her initial post to suggest she lied about having a child.

According to the new mum, her son will be discharged today Friday, April 10, 2020.

He will be discharged tmr from icu.i didn’t post cos he was premature.God saved him.I just had to post this.

For the people who didn’t see me, I have no close friends.I can’t show you a fragile child, I risked this just to post. @ruggedybaba update paddy mi.i Had to do this.Thank you.

Be safe and stay safe.THE WORLD JUDGE WITHOUT KNOWING.I JUST HAD TO POST THIS AND HAVE A GOOD DAY✊?mummy m