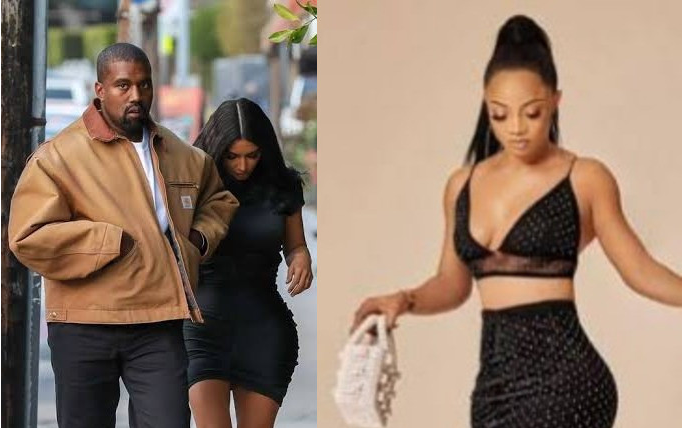 OAP, Toke Makinwa has gone on Twitter to call out Nigerian men who are praising celebrity mum, Kim Kardashian West for being instrumental to her husband, Kanye West’s new billionaire status, while criticizing Nigerian women for not being as supportive of their own men.

A few days ago, American business magazine, Forbes, announced that Kanye West is officially a billionaire after his sneaker line was described as “one of the great retail stories of the century.” And although Forbes valued the dad-of-four’s net worth at $1.3 billion, Kanye reportedly sent a text to one of their employees, saying:

“It’s not a billion. It’s 3.3 billion since no one at Forbes knows how to count.”

Reacting to Kanye’s billionaire status, Nigerian men praised Kim for standing by her husband even when he was in debt. They also brought up the report that claimed Kim Kardashian paid off Kanye’s $53 million debt. The men took to Twitter and other social media platforms to compare hail Mrs West while calling out Nigerian women as dependent, lazy and not supportive of their men.

READ ALSO:  ”They say divorce is a sin until you die or kill someone”- Toke Makinwa Weighs In On Maryam Sanda’s Death Sentence

Responding to those men, Toke Makinwa  pointed out that Kim stood by Kanye because he stood by her too. She added that Nigerian men will never marry or support a woman like Kim due to her past, yet they want Nigerian women to do for them what Kim has done for Kanye.

Reading some tweets about some Nigerian men praising Kim for ”rescuing” Kanye while in debt and all of a sudden Kim is now your standard for ride and die. the times we live in. how many of you ride for your women like Kanye rides for her? Nice try though, funny AF.”

Kim had a business opportunity with a brand her husband saw as competition, knowing the value of her brand and not wanting to take a meal out of her mouth he gave her a Cheque of 1 million dollars and shares in his company, your fav will leave you for even considering the job.

They’ll call you unsupportive for even considering the opportunity and cancel you for not being a rider yet they want to compare Nigerian women to the Kim/Kanye situation, support your woman, don’t be intimidated by her flying and if your engine knocks she’ll support you too.

Couple goals is we put each other on, we ride for each other, we take care of each other not one person slaving while the other is quick to put down. What works for A might be a disaster for B, do you, don’t forget to be happy, not pretending to be but truly Be Happy.”

Reading some tweets about some Nigerian men praising Kim for rescuing Kanye while in debt and all of a sudden Kim is now your standard for ride and die ????? the times we live in ??? how many of you ride for your women like Kanye rides for her? Nice try though, funny AF