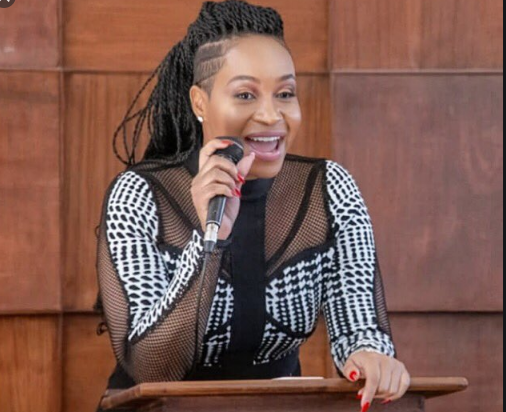 Zimbabwean Socialite, Pokello Nare affectionately known as the Queen of Swagger is disclosing what led to the demise of her three-year marriage to Ghanaian actor and fashion designer Elikem Kurmodzie.

Pokello wants to share her truth with other young women out there in hopes that they do not fall into the same error she made.

Pokello who met her ex-husband, Elikem during Big Brother Africa reality show (The Chase) in 2013 got married to him in September 2015. In a recent interview, Elikem shared that he might have been too young at the time of their marriage and had no real grasp of the concept of marriage.  Pokello also revealed at an event she was speaking in that she got married to prove a point that she was still “wife material” despite her scandals.

She made the remarks a couple of weeks ago at the University of Zimbabwe during an official launch of She Roars Brand – a programme meant to empower young women, where she was one of the guest speakers.

“I made a lot of mistakes in my life and I have learned from them. I also got married at the age of 28 because I felt like I needed to prove to people that with all my scandals, I still am wife material,”

She added that such mistakes have led her to realise that it is of paramount importance for women to pursue their careers and money whilst in their 20s instead of chasing marriage.

We do not need to prove or validate anything to anyone. What you need to do is focus on your careers, making money and happiness.

Society teaches young women that getting married is the ultimate accomplishment and achievement. Young women have no business getting married in their 20s because you married men who do not comply with your spirit, careers and dreams.

Six Months In, Actress And TV Presenter, Vimbai Mutinhiri Relishes Her Rollercoaster Experience Of Being A Mum

During the same presentation, she pleaded with young women to never give men the liberty to determine their destinies.

“Stop giving men the power to define your destiny. I am such a feminist and a major advocate for independent young women,”

Since divorcing with Elikem whom she shares a son with, Pokello has been dating Ronald Muzambe popularly known as Rondon for over a year now.

Read the original article on 263Chat.