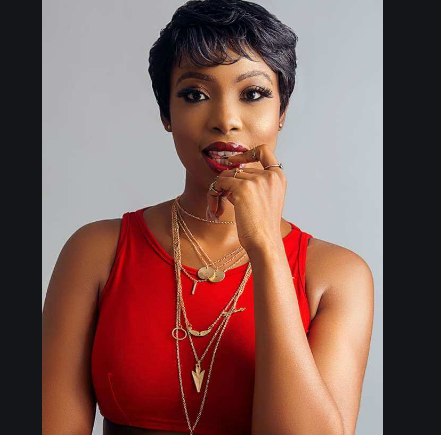 How AIT Boss, Chief Raymond Dokpesi and 7 Members Of His Family Tested Positive For COVID-19

Media personality Bolanle Olukanni has expressed her resolve to not join other women in saying that “men are scum” and she gave her reason for this. The TV presenter in a series of tweets emphasised that what a person projects continuously is what they will attract because the human mind is supernatural and she will, therefore, not ruin her future with her own mouth.

Her assertion caused her to bump heads with other women on Twitter who told her she was missing the point of the whole conversation around the ‘men are scum’ slur.

The TV host had initially tweeted:

At some point you really have to choose to stop hating men.

And if you are going to continue to hate them then free yourself from expecting anything from them so the disappointment is doesn’t sting as much.

Much of the disagreement with other women came on the heels that Olukanni posted her first tweet in response to a number of trending tweets shared by a other women calling out men for sexual abuse.

Some women pointed out that calling men out for the wrong they’ve done is not “hating” rather it’s holding them “accountable”.

READ ALSO: TV Host, Bolanle Olukanni To Women With Stretchmarks: ”You are beautiful no matter what”

Bolanle then explained in a follow-up tweet why she will not join in calling men out.

I don’t believe that I will prepare for a cheating partner. I do not say these things or entertain these thoughts .

So that energy please pass me with it.

How the hell are you getting married and preparing for a cheating scenario.

The madness. Please please . If you are then just don’t marry.

Enjoy your life as a single person. Be merry. 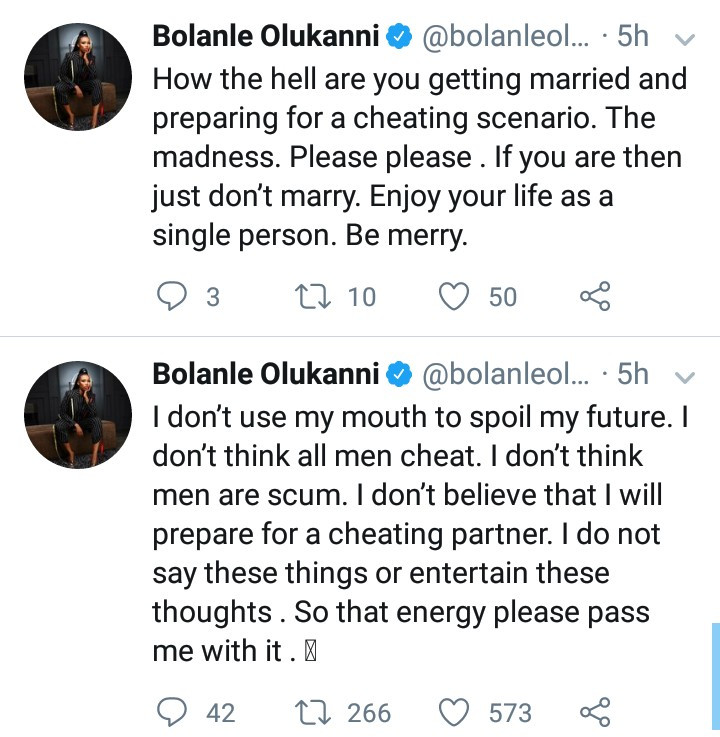 Honestly bolanle you’re my girl and I love you but this is such poor timing for this kind of thread..

women can’t be re-living their rape and sexual assault stories and you choose that period as the time for ‘men are flawed like everyone else’.

Yes there are amazing men out there.

None of my tweets have nothing to do with the discourse on rape that is going .

We are discussing people’s expectations in marriage and THAT is the conversation I am having on my timeline.

Do NOT put words into my mouth.

She insisted that she’s not excusing anyone’s behaviour but she’s choosing not to be negative.

Human beings are flawed. Period. Men and women. Men showcased their flawed nature by oppression and manipulation and alll the horrible things they have done in the past and continue to do.

But they aren’t scum. They are human and flawed.

There is nothing you can tell me that will make me change my perspective. Not all men cheat. If you choose to believe that -prepare for your cheating partner. I will not.

If you understood the power of your mind you wouldn’t say this. Our minds are supernatural. That’s on that.

Please leave me out of your negative nancy party abeg. Life is hard enough. I choose to control my thoughts and work hard to ensure my perspective on life will bring good energy.” 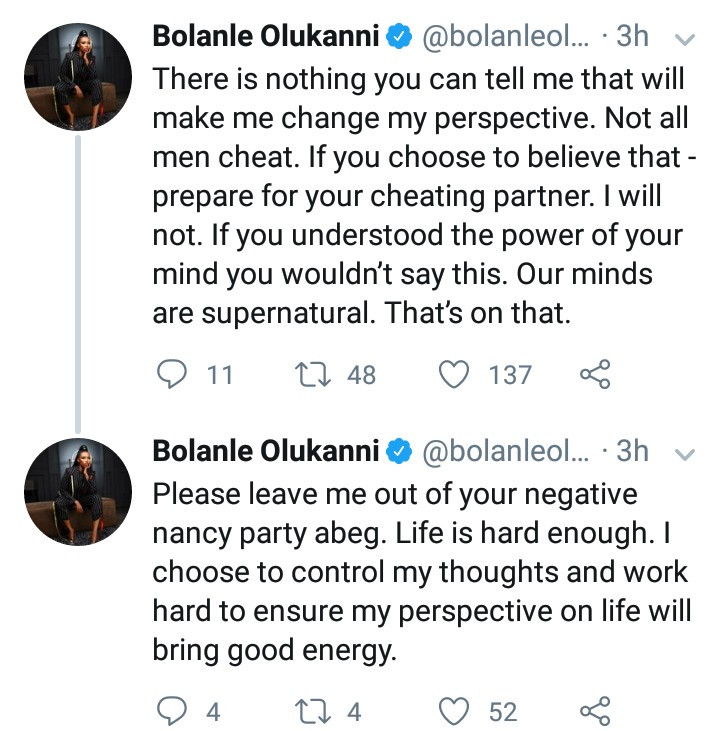