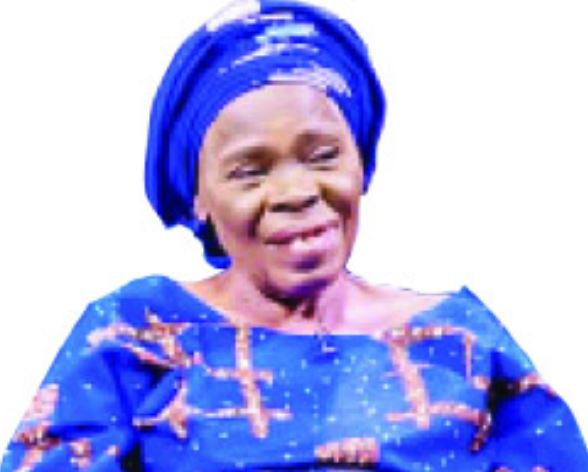 Actor & Grandpa, RMD Calls For Gender Equality As He Speaks On His Life As An Only Child

Folashade Akiode‘s path to motherhood is an inspiring story of perseverance, which enabled her to surmount obstacles strewn before her.

Ten years ago on April 12, 2010, when she was 57, Akiode, (now 67) became a mom of triplets. Akiode who got married in 1988, conceived through assisted conception, commonly known as IVF, at Nordica Fertility Clinic, Lagos. Last month, the retired pharmacist celebrated the 10th birthday of her bundles of joy.

Speaking in a chat with Sun News, Akiode relives her tortuous journey to becoming a mom at that old age.

Tell us a bit about yourself

You had your babies at age 57, what was your experience like?

I had them through IVF (in-vitro fertilization) and everybody, just like myself, was happy that it was successful. I did it once and it stayed. Some did IVF five to six times but I did mine once.

Your children are 10 years today. Could you tell us the story of your journey to motherhood?

I had triplets on April 12, 2010: two girls and a boy. I lost the boy 36 days after birth. He died in the hospital. I gave birth to them at Isolo General Hospital through IVF. I was on admission at Ayinke General Hospital, (LASUTH) but that time they wanted to renovate Ayinke and my doctor was transferred to Isolo, so I followed him to Isolo and gave birth there. 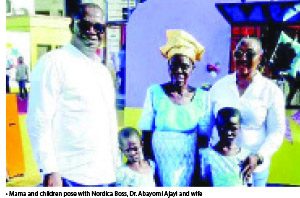 How did you feel when you heard that the assisted conception was successful?

I was full of joy. Even the place I did the fertility treatment, Nordica Fertility Clinic, rejoiced with me for the success of the IVF.

How did you get to know about Nordica Fertility Clinic?

We searched on Google. We picked three fertility clinics but later settled for Nordica. Thank God we did. Dr. Abayomi Ajayi is a very nice man and very supportive. He really helped me a lot. If it were not for the support I got from him, maybe, I wouldn’t have had the children.

I went with my husband to start the procedure but along the line my husband opted out. But the doctor assured me that they also treat single women but he didn’t want anyone to damage his career. He would not want a situation my husband would come to sue the clinic for treating his wife without his consent.

As a smart woman, who needed children, I had to divorce my husband. When I write my life history about these children, Dr. Abayomi Ajayi’s role will feature prominently. He did not increase his fee despite the fact that I took a break in the course of the procedure to settle my case with my husband. He has been very supportive. They knew I’m a single parent. Even his wife has been very nice to me. She works at the hospital too.

How long did the procedure take?

Like I told you, I broke it because my husband opted out. I had to make sure my doctor was safe from court case in the future, so, I divorced him. That was why I said when I came back to continue, he only accepted the first fee he originally charged me. I had deposited half of the money before my husband backed out. By the time I was ready the cost of IVF had gone up but the hospital management did not charge me any extra fee.

He was the one that had fertility issue. But when he was told to donate his sperm he decided to opt out.

When did you get married to him?

Could you tell us your experience before the IVF option?

Let me tell you one secret. If the relations of the man you are married to are not giving you trouble concerning the fruit of the womb, please do background check of the man. Maybe they know their son is the one having problems. But if they begin to trouble you, then you need to check yourself to know if you are the cause. His only sister didn’t trouble me despite not having a child.

At what point did you consider the IVF option?

We were living in my official staff quarters at Ogba, Ikeja. One fateful day, he just packed his clothes to live with his sister. Then my friends kept asking me if I would not follow him. I told them I was not going to follow him to his sister’s house.

The first time we went to Nordica we went together and he opted out, packed his things to stay with his sister. And I had already paid part of the fee to the clinic. It took me almost two years to sort out the divorce case with him.

Why This Married Woman, Josephine Afolabi Is Speechless With Joy After 15 Years Of Mockery | Be Inspired!

But at 57, were you still seeing your period (menstruating) then?

Hmmmm. All the hormones that God made, science is making it. They used the hormones to calculate my EDB. I was among the first set of people to use the machine they brought to the clinic for IVF process. They used it to fix our womb. As if somebody is using manure for plantation.

I was watching them when the procedure was being done. I had three children – two girls and a boy. The boy died and I have Mary and Esther. They are now in primary five. Even those who have low sperm count there’s a machine that improves and boosts the sperm count. The first person they did the procedure for had twins. That was about four years ago.

Esther look so much like me. My children are very sharp. Esther is over sharp. Mary too is sharp but more on the quiet side. Esther looks so much like me. She tells you her mind at once. To mark their birthdays we are cutting the cake in the sitting room because of the lockdown. I would take them to Sweet Sensation for a great time after the lockdown.

What advice do you have for women who are having delay with childbearing?

Once they have money, let them do IVF.  Some people have the money but they don’t know how to channel it to what they are trusting God for. If you have property, please sell it. And pray to God for the success of the treatment. I don’t hide my story.  I preach to people in the bus on how God was merciful to me.

You mean you come out plain to tell the public you had IVF?

How I got my children at 57, but God supported me because I did IVF once and it was successful. Even, people without womb have children through surrogacy too. Esther and Mary are 10 years today and I give God all the glory for making me a joyful mother of children.

You can testify sitting with me that people call me Iya Ibeta. Even those who have low sperm count there’s a machine that does that. I knew the first person they did it for at same clinic and she had twins. That was about four years ago.

Did you breastfeed the babies?

Yes, I breastfed them. In fact I wanted them to suck breast for two years but I stopped when I was about sitting for my promotional exams. They were two years minus 27 days, when I stopped breastfeeding them. They brought back my menstruation that is what they used for the Expected Date of Birth.