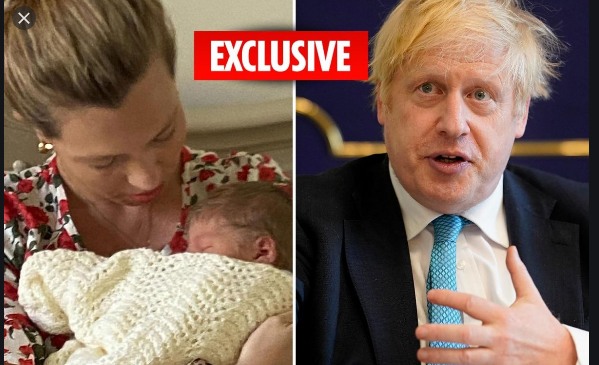 UK’s Prime Minister, Boris Johnson has opened up on the thoughts running through his mind as he battled for his life in Intensive Care knowing that his child with fiancee, Carrie Symonds was due to arrive anytime soon.

Mr Johnson  has said he feared he would not live to see his baby son born, as he battled COVID-19 in intensive care. The Prime Minister was asked if he had ever feared he might not live to meet Wilfred, who was born on Wednesday, in an interview with The Sun.

Johnson, 55, said he was “deeply frustrated that I couldn’t see the path…the way out of the skip” as he fought for his life at St Thomas’ Hospital in central London.

But, yeah, I suppose there was some terrible, as I say, some natural buoyancy or refusal to give in or harbour negative thoughts.

I never really thought that I wouldn’t come back from it. It was more frustration,

Boris Johnson said he’s seen the NHS save life and also bring new life into the world in the last month and talked of his love and admiration for the health service. He said when he left ICU and went back to a general ward at St Thomas’ Hospital it was a Thursday – and he clapped ‘like crazy’ for the NHS.

More than 130 front line staff have died since the crisis began and the Government has constantly faced questions about staff having sufficient PPE.

Over the weekend proud mum Carrie Symonds posted a picture of the newborn wrapped in a blanket – who is already sporting a full head of brown hair – on  Instagram as the PM said he was “thrilled” about his new son.

The newborn is named Wilfred Lawrie Nicholas Johnson after Dr Nick Price and Dr Nick Hart, doctors that cared for Mr Johnson while he was recovering from the coronavirus.

Introducing Wilfred Lawrie Nicholas Johnson born on 29.04.20 at 9am.

Thank you so, so much to the incredible NHS maternity team at UCLH that looked after us so well.

I couldn’t be happier. My heart is full.

Ms Symonds, 32, had previously said that the baby was due in the early summer, leading to the belief that the due date was in June. The PM was hospitalised with COVID-19 and spent three days in intensive care in April.

He has said he would take a “short period” of paternity leave later in the year. Mr Johnson had also revealed that doctors were preparing to announce his death as he fought the coronavirus.

He said he received “litres and litres of oxygen” to help him fight the deadly virus, describing how a ‘death of Stalin’-style scenario was prepared in case he passed away.

The Tory admitted his doctors “forced” him to go to hospital as he was reluctant to leave Downing Street. Mr Johnson added that his time in hospital was a “tough old moment” and spoke of his relief when he left intensive care on April 9 and back on to a general ward.

Mr Johnson said staff clapped for him but he felt it was the amazing doctors and nurses that deserved to be clapped for.