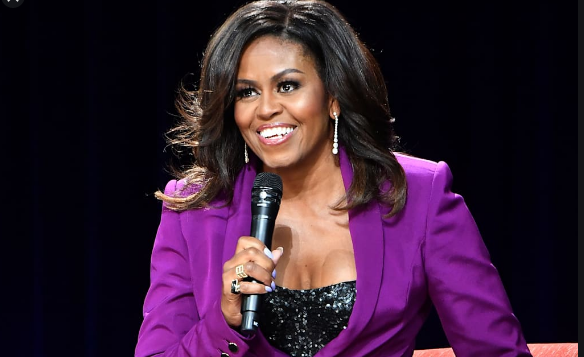 Be Inspired! How Nigerian Model, Omotola Ekundayo Suppressed Her Shortcomings To Become A Success

Michelle Obama has admitted that becoming a mother meant she had to make a “concession,” which was abandoning her aspirations and dreams and her career to be specific.

Women the world over can relate to motherhood impacting the intensity to drive their careers, and the sacrifice that their role as mothers require; making Michelle’s narration completely relatable.

In her new Netflix documentary ‘Becoming’, the mum-of-two said she was not ready to have children, and that something “had to give.” What had to give in this case was her career.

Michelle lady discusses her relationship with Barack, which she says was “all about our equal partnership.”

But she continues to admit that the birth of her two daughters, Malia and Sasha made being Barack’s equal harder.

The thing that really changed it was the birth of our children. I wasn’t really ready for that. That really made it harder.”

Something had to give and it was my aspirations and dreams.

I made that concession not because he said ‘you have to quit your job’ but it felt like ‘I can’t do all of this so I have to tone down my aspirations, I have to dial it back,”

she says in the documentary.

READ ALSO: What Michelle Obama Recently Shared About Her Marriage Can Help Other Women Fare Better In Theirs

Michelle and Barack met in 1989 while they were working at a law firm. They married in 1992 and had their first daughter, Malia in 1998. Later in the documentary, Michelle explains that the pair are planning to step away from the limelight.

“Barack and I don’t want to be at the forefront of it all forever… not even for much longer,”

The documentary also shows the mother of two being supported by her children while she is signing books at one of her book tours.

She is greeted by Malia, who gushes over her mom’s show. The 20-year-old then says:

‘It’s like, damn. Those eight years weren’t for nothing…People are here because they really believe in hope and love and other people.”