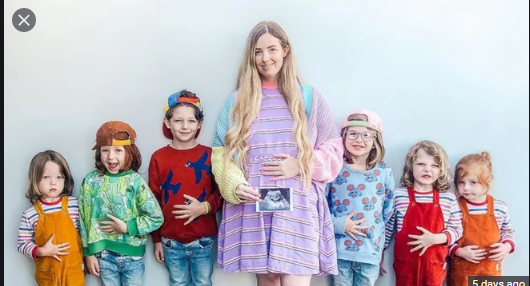 A 27-year-old mum-of-six, who is currently pregnant with twins, has revealed what life is like with a large family of her own and how her kids feel about their unborn siblings. Later this year, Chloe Dunstan and her husband Rohan are going to welcome twins.

These two babies will be the seventh and eight children in the Dunstan household. The parents had three children by the time Chloe had turned 22 – Evan who is now eight-years-old, Otto, seven and Felix, six.

Then followed a set of triplets, Rufus, Hank (real name Henry) and Pearl, who are all nearly five. The triplets survived being born at 28 weeks.

The mum-to-be is now 27 and is “extremely excited” to keep on growing her family – despite all of the extra work it will involve. Her kids are also very excited to have new babies in the house. The twins are due in November.

Chloe approached each of the six little ones individually to tell them the big news, when she first discovered she was expecting.

She filmed their reactions for her YouTube channel, Chloe and Beans. All of them were pleasantly surprised by the news, but some of their responses were rather amusing.

Two of the children were confused and asked their mum if it was a “food baby” in her tummy.

Speaking to MailOnline, she explained:

I think twins feels like perfect addition to our family and luckily the kids were delighted with the news, too.

“They love being part of a big family and can’t wait to have more siblings.

With more children, comes a busier life and the Dunstan’s are already pretty busy. Chloe and Rohan home school all six of their children and also run an online toy business from home.

The kids do a bit of school work, and then mostly focus on doing the things they enjoy like drawing, art projects, science projects, playing and spending lots of time outside,

It can be a lot with a career, home schooling and homework, but we manage it well together and doing all of this means we can maximise family time, which is really important to us.

A typical day for their family sees the mum get up, ensure the kids are getting ready before starting them on some work and sitting down to do her own work.

The day goes on like this, until around 4.30pm, when she begins preparing dinner and winding things down. The kids do their “own thing” during this time, such as drawing or crafts, then after dinner it’s bath and shower time.

Once in their pyjamas, the siblings can have a small play time, then Chloe reads a story before tucking them all in by 8pm.

She adds that life can be pretty “hectic” with such a large family, but it’s gotten “easier” over the years.