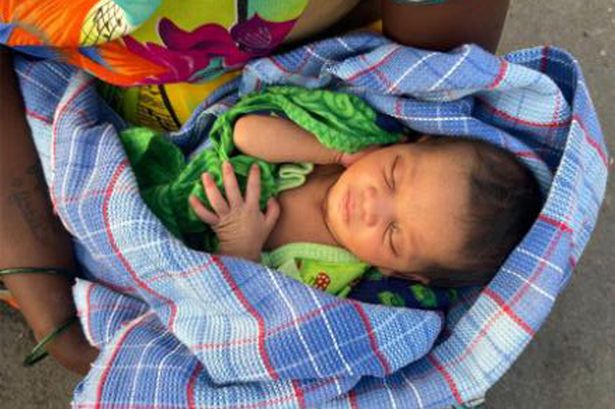 3
SHARES
Share on FacebookTweet thisEmail to friends
An Indian mum has done what seems like the impossible – she gave birth and then kept walking for over 100km with her newborn. The new mother was traveling with her husband and their children when she went into labour.  The family moved out of their town because it was under lockdown and they had no means to make money there. CNN reports that the woman from India traveled 160km with her husband and a total of four children.
They were traveling from the city of Nashik in Maharashtra to the town of Satna. The woman, who was pregnant at the start of their trip, gave birth to the baby along the way.

READ ALSO: Made Of Steel: Read How A Mother Of Seven Successfully Performed A Cesarean Section On Herself
According to an official at one of the checkpoints, the woman stopped to rest for a little less than two hours after giving birth.
The family had no money and no way to get to a hospital. The family had left their old town because they had no place to live. The lockdown had left them jobless with no means to sustain themselves.
The woman has since been taken to a quarantine facility to receive medical treatment. Many others like this family have attempted to leave their towns in search of work. They are forced to walk because public transport has been shut down.
3
SHARES
Share on FacebookTweet thisEmail to friends
Tags
160KM Birth covid-19 India Lockdown Walk
0 Comments
Kaffy Wale May 16, 2020
Recent Posts