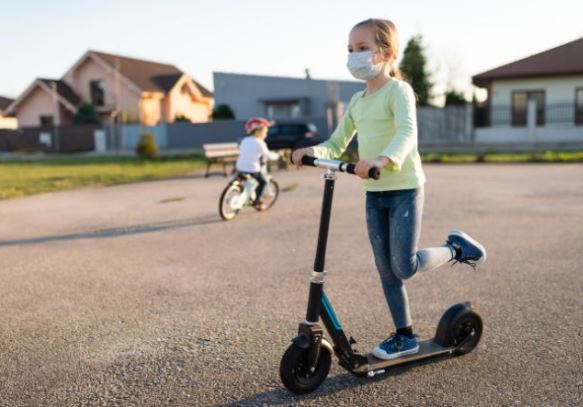 According to the Centers for Disease Control and Prevention, face masks can help block the transmission of respiratory droplets from an infected person, however two groups of people are exempt from covering up in public: Children under the age of 2 and those with difficulty breathing or who can’t remove their masks without assistance.

The American Academy of Pediatrics adds that in certain situations, children (older than two) don’t need masks “as long as they can stay at least 6 feet away from others and can avoid touching surfaces. For example, it’s fine to take a walk as long as your children stay 6 feet away from others and do not touch tables, water fountains, playground equipment or other things that infected people might have touched.​”

Face mask recommendations have changed this year — in April, upon learning that SARS-CoV-2 (the virus that causes COVD-19) can spread among people without symptoms or those who haven’t yet developed symptoms, the CDC said that everyone should cover their faces in public.

Previously, the health institution deemed masks only necessary for sick people or those caring for patients who cannot wear them.

“Face masks protect when in close proximity of others and children under the age of 2 generally shouldn’t be at risk [of contamination] if they’re restrained in a stroller or a carrier,”

There are safety reasons too. According to Andy J. Bernstein, M.D., a physician at North Suburban Pediatrics in Chicago, toddlers have smaller airways than older children and adults, which matters if a mask obstructs or is fastened too tightly. Bernstein says:

“Kids under two can’t remove it easily and because their airway is smaller, they don’t have as many reserves if they don’t get enough oxygen and [therefore] have a higher risk of suffocation.

A kid under two likely couldn’t communicate if fabric was choking them. So little kids are at higher risk for problems whether it’s breathing or not being able to remove the mask.”

It’s for that reason that the CDC recommends anyone who cannot easily remove a mask themselves shouldn’t wear one. After age two, many children have developed communication skills that allow them to better signal discomfort, says Kass.

Although parents should avoid putting kids under two in masks to be safe, Bernstein says the guidelines about toddlers shouldn’t cause fear among the general population.

According to Reuters, there have been social media warnings about the prolonged use of masks causing hypercapnia, the inhalation of expelled carbon dioxide that causes headaches and dizziness — but a CDC representative told the outlet,

“You might get a headache but you most likely [would] not suffer the symptoms observed at much higher levels of CO2. The mask can become uncomfortable for a variety of reasons including a sensitivity to CO2 and the person will be motivated to remove the mask. It is unlikely that wearing a mask will cause hypercapnia.”​

Overall, Bernstein recommends that parents stay focused on the CDC’s guidelines, not what’s on social media. He says:

“Face masks aren’t designed or studied for infants and children under two. So if they’re sold as such, it’s probably just about marketing and not patient safety.”