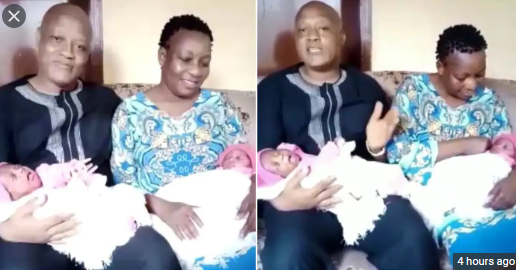 The past one year would look nothing short of a beautiful dream to a Nigerian couple (pictured above) after almost 16 years of marriage. Like most Africans and indeed Nigerians, David Bankole and his wife got to the business of making babies as soon as they got married but what lay ahead was 16 long years of pining for a child to call their own since their marriage in 2003.

But in God’s waiting room all hope is not lost- not only did the Bankole’s welcome their first child in February 2019, Mrs Bankole took in again shortly after that and it’s the incredible birth story of this couple’s second pregnancy that’s making everyone exclaim with joy.

In a video posted by comedian/actress, Princess, Mr Bankole and his wife narrated the unique birth story of their second born twin children.

READ ALSO: How Florida Mum, Alexzandria Wolliston Managed To Birth To Two Sets Of Twins In One Year

Bankole who shared that his wife quickly conceived after they had their first child also gave birth to their second baby on June 19, 2020.

The couple even had a naming ceremony for the new baby. It was after the naming ceremony Mrs Bankole started to complain she was having some movement in her stomach. They went to the hospital and it was discovered she had another baby in her.

They welcomed the other twin 21 days after they had the first twin, totally oblivious of its existence until its delivery.

To the glory of God, this union is almost 18 years now. After we got wedded in 2003, we waited for sixteen good years before God answered us and gave us our first daughter in February 2019.

We were overjoyed. Before we knew it, she conceived and gave birth to another baby on the 19th of June 2020. We were so grateful to God. We had the naming ceremony.

Some days after, she said she was feeling some movement in her stomach. We were like maybe it’s because she just had a baby.

However, as the days went by, she kept complaining of that movement in her stomach so we had to go back to the hospital because when we did scan prior to the delivery, it was one baby that reflected.

When we got to the hospital after several complains, they now checked her and found another baby. That was how we took delivery of the second baby on Friday, 10th of July and both processes were natural birth.”

Watch the video as shared by Comedian Princess: