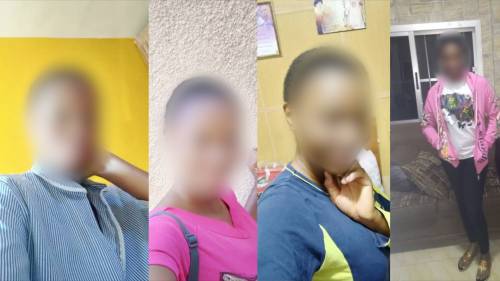 A victim of human trafficking, Taiwo Motunrayo has narrated how a travel agent deceived her into taking a job offer in Dubai that landed her into months of frustration in Lebanon.

The 23-year-old victim shared her story with SaharaReporters:

How did the journey to Lebanon begin?

I travelled to Lebanon through one of my secondary school friends in Dubai. She told me that I should come over to Dubai; and that there was a job opportunity there. She introduced me to her brother, who she said is a travel agent.

When did you know you would be going to Lebanon and not Dubai?

I got to know that like three weeks before I travelled. He said a job opportunity was not readily available in Dubai and that I should go to Lebanon. He said Lebanon was okay. He said that the salary was $400.

I started feeling that this guy was shady when he did not give me my visa and ticket directly. He gave me someone’s contact. He said when I get to the airport, I should give the person N50,000 and that I should pretend not to be travelling.

He said it was for a boarding pass.

How did you raise the money?

How did your first day in Lebanon go?

When we got to the airport, they put all of us in a room. They said our employers – the person that applied for the visa–would come and pick us one by one. My employer came the next day. We were more than 50 there; it’s a big space.

I worked with this person for two days. I was cleaning and mopping the floor. I complained that this was not what they told me I would do in Lebanon. She said she had already bought me. She said I had to do the work. She took me back to the agency’s office and said she would find another buyer.

What did you mean by ‘another buyer’?

They usually told us that they bought us. They said that they were the ones that procured our visas and tickets. I told them that I paid the agent.

They said our passports were uploaded on the Lebanese system for people that are looking for a housemaid and that they bought us from there. I remember that the agent in Nigeria told me to take one passport. I didn’t know that they uploaded it on the Lebanese portal.

I told my Lebanese agent that I could not do this work. She said that I had no choice. She said she paid $2,000 to buy me. She then sent me to one woman that was going to buy me.

I stayed only two days in this house. The madame said I should wake up by 6:00 am and sleep by midnight. She just delivered a baby boy, and I was the one taking care of him.

She even said I was not allowed to touch my phone. I told her I could not do the work. She had to take me back to my agent. My agent said I was going to get one-week training since I was not used to the job.

I threatened her. I went to her drug cabinet, picked up one of the poisonous vials and told her I was going to kill myself. She said I should go on and that she would send my corpse to my family. She said she would only send me back to Nigeria if I paid her back her $2,000. Where will I get that type of money? I had to endure and do the work.

I changed houses five times before I finally found one. In this home, I was the gateman. I washed their car twice a week and cleaned the apartments in the house. They even showed me how to trim flowers. The couple has three children. I was also a nanny when they went to work during the week. I was given a book containing all the foods I must prepare.

After one month, I started having body odour. I told her to buy me roll-on or perfume. She asked me why I didn’t bring them from Nigeria. I told her I was told not to carry much when I was travelling. She did not answer me.

SEE ALSO: Two Female Survivors Of Human Trafficking Tell Their Gruesome Experiences: ‘I woke up and realized my kidney was gone’

Did you ever reach out to your family?

I made a video call with my family. My family was surprised that I had become a skeleton. I told the travel agent that this was not what he told me. He said I should be happy that I was getting $200 every month when some people don’t have a job in Nigeria.

I told him that I was going to report him. This was not what he told me. He said if I did, I would regret it for the rest of my life. I think he threatened my dad. I sensed this because my dad called me. He said I should endure and that whenever they can raise money, they would send it to him so that they can release me.

What other things did you experience in Lebanon?

I told the family that I could not work again. They called the Lebanese agent. She said since they’ve changed house for me several times and I’m still refusing to work, she would take me to prison. I told her to go ahead, and that prison was better than the work I was doing. She took me to her house. She beat me up and locked me for two days. She said I would stay there until I was ready to “have sense.”

After the two days, I was starving and tired. I told her I was ready to endure. She helped me find another home to work. In this house, they were kind to me, but the work was not lovely. My health was getting worse.

Five months after I arrived at the house, I had issues with my menstrual cycle. The lady at the house took me to the hospital. The medicine they gave me was affecting my system. When I could not cope any more, I begged her to allow me to go back home and treat myself. She said I didn’t have to go back home. She said I should pray.

How were you able to return home?

I had to lie that I have a daughter in Nigeria and she is sick. I told them she needed blood and I’m the only one that can give it to her. I reached out to my friends to forge a hospital report for me.

I told one of my uncles to put a drip on his baby, and I showed them. I told them the baby has sickle cell anaemia. After I did this, my boss released me. When she released me, the airport was not open. I pressured her to take me to the Nigerian embassy. They said I would need $600 for my ticket. I did not have money, and my boss did not have money.

Through Project Ferry and the Oyo State Special Assistant On Diaspora Affairs and some people at the Lebanese embassy, I was able to raise money and come back home.

Where did you stay when you left your employer?

More than 30 of us contributed to rent three rooms. There are still up to 100 people that are stranded over there. I stayed there for two weeks before they called me at the embassy. They said that my name had been included among those that would be going to Nigeria.

Yes. All of them are ladies.

What is your plan now that you are back?

Before I left Nigeria, I was training to become an actress. I’m going back to acting school. When I was in Lebanon, I also did some trading in skincare products and second-hand clothing. I’m praying that the Nigerian government will help us. If there is a job here, people will not be pressured to travel out of the country.