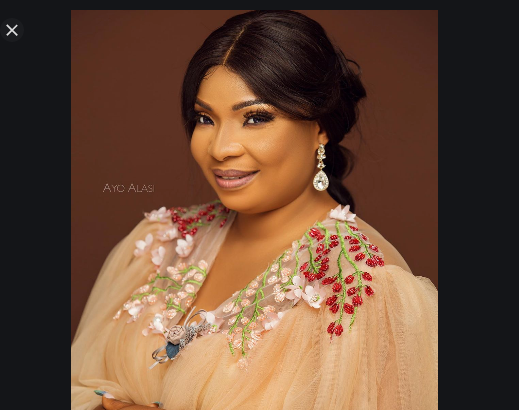 Nollywood actress, Laide Bakare in an exclusive interview with the Sun has shared on her life, career, achievements, regrets and marital experiences among other issues. Discussing her career versus her marriage, the mum-of-three unapologetically titled in the direction that most Nigerian mums wouldn’t.

She shares on combining motherhood and career, as well as the mindset that helps her handle unwanted male attention in her very public career.

How do you combine marriage with career and motherhood?

I wouldn’t say it’s hard or easy. No one is going to take up your responsibility for you. You just have to be the woman that you are meant to be. Whichever way, its God’s way of taking me through everything.

If your husband asks you to quit acting, what would you do?

I dont think any reasonable man would want his wife to quit her career. Definitely no, I wont adhere to that.

So, you are saying if your husband asks you to choose between him and your career, you won’t hesitate to make a choice?

I will choose my career.

Why would you make such a choice?

It’s because I have worked for it. I have been making money before and after, through my job.

I have other side businesses but the mother of them all is movie-making. So, any other thing that comes out of it is just secondary. I wouldn’t jeopardize what made me, because I have been Laide Bakare since age 16. So, I don’t think it is something I would want to drop.

How do you safeguard your marriage from crashing?

It’s God, the fact that it has not happened doesn’t mean it will not happen. It may happen to me tomorrow. For me, I feel so calm and easy, believing that whatever God wants in one’s life shall happen. What if it has been destined to happen in one’s life?

What attracted you to your man?

What misconception do people have about you? And how did you overcome it?

Most of the time I dont read about myself. So, I dont really know the misconception people have about me. I live a public life, so anybody can have any kind of impression about me, and it doesnt define who I am. I see it as part of the job. A lot of people will have bad or good impression about me, so it’s left for them to decide what to hold on to. It’s not about me and it doesn’t matter. Nothing that has been said about me has actually got to me. Most of the time, I am preoccupied with other things, living my life. So, anything about me out there, either positive or negative, I really don’t care.

What is your greatest regret?

It’s not a regret, it’s just a little concern when people try to define you without even knowing the real you. What you have in mind is not the impression out there. People don’t see you the way you are, so it’s not just really what I want for myself. Everything is moving and with time you get better.

What is your greatest achievement in the industry?

A lot, because I started off when I was 16 years old and that’s what I have been doing. So, I owe to the industry everything I have achieved in my life, I mean everything.

What kind of advice will you give to a female artist?

It’s to be themselves and never try to be the good girl. I tried it, I wanted to be the good girl and I deprived myself of so many things. I didn’t want to go to club and mix with lots of people, especially the opposite sex. So, for a period in my life I tried to play that part. I thought I was doing the right thing, but opportunities passed me by because I really didn’t want to do some things, because the impression might be wrong. People may say she dated this (person) before she achieved this and that. So, for me, I really deprived myself of so many things in life, because I wanted to be that good girl, and as clean as possible. I realized that you can never be, even if you are Mary, mother of Jesus, in the long run they will still talk about you. Just be you, anything that makes you happy, just do it.

On handling male attention outside of her marriage, the mum-of-three had this to say,

I dont know how my phone number gets to people and they call me randomly. So, I stopped picking unknown numbers for a long time.  But I get text messages such as I like you and all of that, and I will be like I dont even know you. So, I dont pick calls I dont know. It happens a lot to women, and even if you are ugly, men will still call you.

Have you been tempted to accept one?

No, because there is no need for me. I see myself not lacking anything. I am contented. I am not anxious, I am not greedy; I am just open. So, for that, I don’t think it is necessary.

What determines your fashion sense?

I like to be as comfortable as possible no matter the weather, but occasionally, I wear short dress.