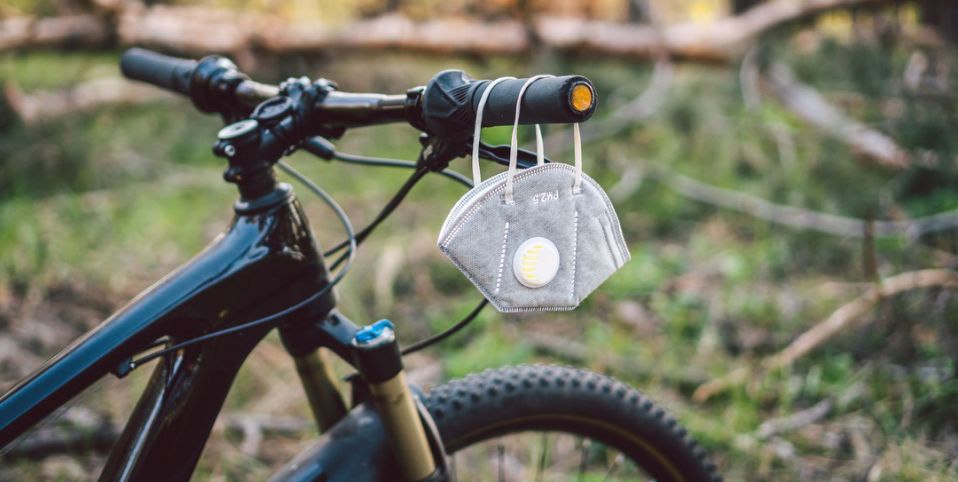 Exercise is still very important for your health. Not only does moderate, regular activity keep your immune system strong, but it also helps prevent the underlying conditions that might increase your risk of more severe coronavirus complications such as obesity, high blood pressure, and diabetes.

Specifically, research finds that regular exercise may reduce the risk of acute respiratory distress syndrome (ARDS), a potentially deadly complication that affects between 3 and 17 percent of people who come down with COVID-19.

Trey Richardson didn’t feel right. He and his wife were doing a lunch ride on some secluded trails behind their house. About 45 minutes into the ride, they were working their way up a “no big deal” climb he’s done a million times. This time, he could barely make it to the top. Richardson, a 48-year-old former competitive cyclist who lives in Woodstock, Georgia, says:

“It was hot and humid, and I hadn’t been feeling right. But I thought I was just having one of those off days you have when the weather is oppressive.

“But going up the last climb…I had this odd shortness of breath, and finally, I was like f—, I can’t breathe. My heart was pounding and I had to stop for 10 minutes. We got back to the house and my wife said, ‘You need to make an appointment to see a cardiologist.”

She didn’t have to tell him twice. Richardson’s dad died from heart disease at 61. Though the longtime cyclist had never had a cardiac issue, he knew he had a genetic predisposition to one. So he scheduled a battery of heart tests with a sports cardiologist at Emory University Hospital in Atlanta. But first, he got a COVID-19 test.

The nurse called the next day with the result: positive. “I was dumbfounded,” Richardson said. “I’ve been the poster boy of staying home.”

His cardiologist, who also received Richardson’s COVID-19 test result, called him shortly thereafter advising him not to ride and not to exercise, Richardson said. Richardson continued:

“[My sports cardiologist] said they’re seeing athletes become symptomatic due to the natural and normal inflammation in their heart and lungs caused by moderate to intense activity.

After that ride, I struggled with breathlessness every time I tried to do anything. I would feel about 85 to 90 percent fine while still, but as soon as I did any type of easy activity like walking around the yard or going up stairs, I would be sucking for oxygen and exhausted for hours.”

READ ALSO: COVID-19: Should You Wear a Face Mask While Exercising? Here’s What The WHO Says

In short, exercise can make COVID-19 worse. For cyclists and other active people who generally turn to physical activity to boost circulation and feel better faster when they’re a little under the weather, this is new and urgent news, says Jordan Metzl, M.D., a sports medicine physician at Hospital for Special Surgery in New York. Metzl says:

“This goes against my personal exercise philosophy that burpees cure pretty much everything and the advice I have given for 20 years that it’s okay to exercise through minor sickness symptoms. COVID-19 plays by different rules when it comes to sports and exercise.”

Here’s what you need to know.

Be Vigilant About Listening to Your Body Right Now

So definitely keep moving, but pay attention to how you feel. As athletes, we all have a lot of experience with tuning into the cues our bodies send to us. Don’t just blow off persistent fatigue as a bad day. “You need to be a very good body listener right now,” Metzl says.

“Check in with your doctor if you have shortness of breath, chest pain, heart palpitations like a fluttering or rapid heartbeat, lightheadedness, leg swelling, muscle pains, and/or unexplainable fatigue.

Even if you find yourself suddenly unable to keep up with your usual exercise partners, that’s a red flag to stop and get tested.

Check your heart rate monitor, if you use one. If you’re hitting your peak heart rate unusually early in your ride or having a hard time bringing your heart rate down, that’s a sign you should check in with your doctor.”

According to the CDC, people with these symptoms may have COVID-19. If you suspect you have COVID-19, stop exercising and get tested.
» Fever or chills
» Cough
» Shortness of breath or difficulty breathing
» Fatigue
» Muscle or body aches
» Headache
» New loss of taste or smell
» Sore throat
» Congestion or runny nose
» Nausea or vomiting
» Diarrhea

Even Mild Cases of COVID-19 Can Hurt Your Heart

Being healthy, fit, and strong may help you avoid some of the more severe symptoms of COVID-19 like ARDS, but it doesn’t make you immune from some of the more insidious effects of the disease.

And even if you only come down with a mild to moderate case, you are still at risk for myocarditis, inflammation of the middle layer of the heart wall, which can weaken the heart and lead to heart failure, abnormal heartbeat, or even sudden death.

This can happen even if you have no symptoms at all. In a recent study published in JAMA Cardiology, German researchers performed cardiac MRI testing on 100 adults who had recovered from COVID-19. About half of them had mild to moderate symptoms and 18 percent never had any symptoms.

Though the testing was performed two to three months after their diagnosis and none of them had experienced heart symptoms related to the new coronavirus, 78 of them had structural changes to their hearts, and 60 had myocarditis.

Ironically, athletes might be at particular risk for this complication because intense activity during active infection—even if you’re showing no symptoms—may cause the virus to replicate at a faster rate, Makadia says. He adds:

“During training, you increase your cardiac output. If you’re infected, this could in theory increase the viral replication in the heart muscle. If that happens the higher viral load may increase your risk of cardiac harm in the form of myocarditis, arrhythmias, and heart failure.”

It’s important to stop exercising immediately at the first sign of potential cardiac symptoms and get checked out by your doctor, advises Makadia.

Metzl agrees. “We had a dedicated athlete and CrossFit enthusiast in her early 30s come down with COVID-19 when the pandemic struck New York.

She had lingering fatigue and sluggishness and thought she would go out for a run to feel better. She died of a heart attack. She was young and healthy and had no pre-existing cardiac history. It’s very important to be conservative with COVID-19,” he says.

Blood Clots Are A Risk

An equally scary COVID-19-related cardiovascular concern is blood clotting like deep vein thrombosis (DVT)—something active people may also be more likely to develop in part because of our low resting heart rates, which can cause blood to pool in our calves if we sit for prolonged periods of time, like a long car ride. Dehydration and injuries also raise the risk.

“We know that very intense exercise increases inflammation and affects clotting even if you don’t have other risk factors, which may be why some people who travel to marathons and other races and sit in cars for several hours afterward have a higher rate of blood clots,” Makadia says.

COVID-19 also causes an increase in clotting and inflammation, he says. He adds:

“The athletic population should be concerned about clotting as it relates to COVID. Hydration is key, as is early testing if you have COVID-19 symptoms, so that doctors can monitor clotting proteins in the blood.”

Though you want to take it easy and avoid working out if you’re COVID-19 positive, low-intensity activity like walking, or at least avoiding prolonged sitting, can provide some protection against DVT.

Calf pain, swelling, and/or tenderness are red flags to get checked. Metzl says:

“Again, you need to pay attention to anything unusual. I cared for a cyclist who developed blood clots in both of her legs because of COVID-19 and nearly had to have one of her legs amputated. Now is the time to be extra careful and not blow off symptoms.”

If you’ve been diagnosed with COVID-19, whether or not you have symptoms, you should not exercise for at least two weeks after receiving your positive test, Makadia says. Makadia states:

“If you do have symptoms, you should avoid exercise for two weeks after your symptoms subside. The real concern is that people can have a biphasic response.

You can get symptoms and then after a few days feel that you’ve recovered. But then a lot of people have a resurgence of symptoms, and it’s that second bout that can be really troublesome. That’s when they get significantly worse. We want to avoid that second bout. That’s where that two week recommendation comes from.”

SEE ALSO: How To Detect If Kids Have COVID-19 When They Can’t Explain Their Symptoms

After that two-week period, you may need additional testing as you look to resume your usual activity, Makadia says.

“Your doctor may want to do follow up tests like blood work to check if your heart has been affected by the virus, as well as other tests like an EKG, an echocardiogram, and possibly a stress test.”

Ease Back Into Activity Slowly After COVID-19

Nobody wants people to stop exercising for good. Everyone wants people who have had COVID-19 to start exercising again safely. That’s why doctors like Metzl have started creating guidelines for the medical community to follow as we work our way through the pandemic.

“Everyone is unique and this disease affects everyone uniquely and can affect the whole body in many ways, so there is no absolute algorithm for resuming activity as there is for a sprained ankle,” Metzl, who authored a recently published review article titled Considerations for Return to Exercise Following Mild-to-Moderate COVID-19 in the Recreational Athlete. “We just need to help people return to activity in a gradual stepwise manner.”

In that plan, the first week back, you resume activity at a level that is reduced by at least 50 percent of your normal exercise load. For example, if you usually ride 10 hours a week, you should adjust to just 5 hours per week, spread out evenly across seven days. The following week, if all is well, you can resume at a level that is 30 percent lower than usual weekly total, followed by 20 percent the next week, and 10 percent the next week.

As for Richardson, he was officially cleared of COVID-19 on August 12th and, though he is less fatigued, his symptoms are still lingering.

“I’m working with my sports cardiologist, and we’re starting slow,” Richardson said. The next steps are to set up a battery of tests including a stress test and cardiac imaging to examine if and how COVID-19 has impacted his heart. “Once we have the results from [the tests], we’ll go from there.”