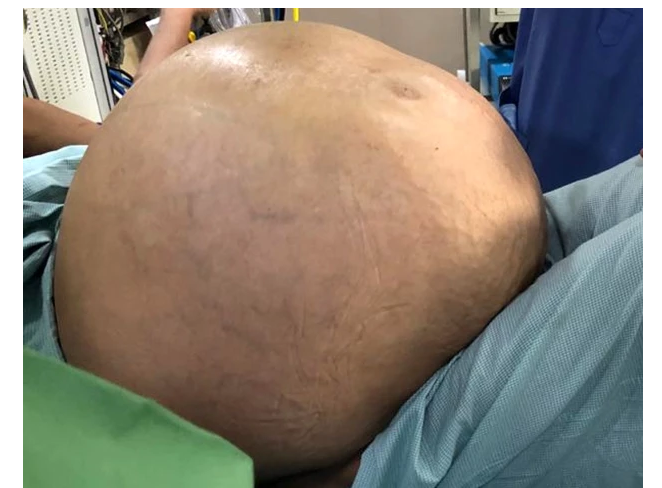 The world’s largest ovarian tumour has been removed from a woman in India. The tumor, weighing 110lbs and as heavy as a 15-year-old boy was removed from a 52-year-old woman at the private Indraprastha Apollo Hospital in Delhi.

The woman, who did not wish to be publicly named had noticed her weight balloon but was unaware of the giant growth on her ovary, according to the UK Sun. When she was set to remove the tumour doctors discovered that the woman had swollen to almost 17 stone. The patient had earlier complained of not being able to walk as her feet swelled. She also suffered severe anaemia which saw her haemoglobin drop.

Dr. Arun Prasad, who carried out a three and a half hour operation on the woman said he was left “shell-shocked” by the tumour. Speaking after the operation on Saturday, Dr. Prasad said:

“I have not witnessed anything like this ever before during my profession – in over three decades of experience.

“We should consider it as a miracle that the woman is recuperating well after being operated on for over 180 minutes.”

Another doctor involved in the surgery, Abhishek Tiwari, said:

“She is lucky that the organs didn’t fail. Otherwise, such pressure could have proved fatal for the patient.”

Doctors said if the woman was left untreated, the tumour could have caused her ovary to explode.