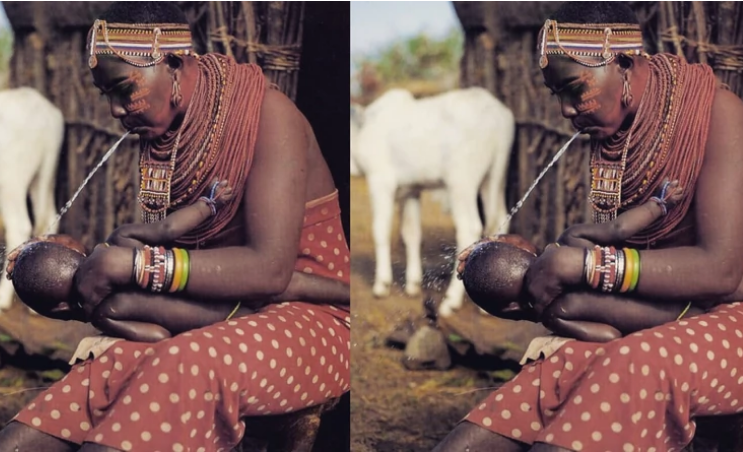 Just like other continents, Africa has some interesting cultural practices with some of them based on interesting reasoning and explanations.

The Maasai people originated in South Sudan. Their language, known as Maa, is the southernmost of the Nilotic group, including idioms spoken in Ethiopia and Sudan.

They migrated to their current homeland between Southern Kenya and Northern Tanzania during the late 17th and early 18th centuries. They displaced some of the other tribes that had previously settled in the region, while others were assimilated into their culture. Their main activity was raising cattle, but the Maasai have also been known for centuries as fearsome hunters and warriors.

The Masai tribe is one of the oldest inhabitants of East Africa with a history dating as far back as the 15th century. They live relatively uninfluenced by modern-day civilization and still retain many of their traditions.

READ ALSO: Barbaric: Why Young Girls Of The Mursi Tribe Must Remove Their Teeth & Stretch Their Lips Before They Marry

For instance, the Masai tribe diet typically consists of milk, meat, and blood, since they have pretty much been a pastoralist tribe. A visit to the Masai village to get a glimpse into their unique way of life is one of the highlights of any safari vacation in Kenya, especially if you are exploring the Masai Mara park.

Members of the Maasai tribe in Kenya and northern Tanzania spit at each other as a way of blessing. When a child is born, people who visit the family have to spit on the newborn baby to wish good luck and long life to the child.

The belief is that, if they praise a baby, it will be cursed and may not survive for long, so they say bad things about the child while spitting on it.

Meaning if a child is born, all visitors from the Maasai tribe to the child’s parents including family and friends must spit on the newborn just as the parents by way of blessing them with good luck and longevity.

Maasai people consider spitting as a sign of reverence and blessing, and they have incorporated it into their greeting culture. They spit into their palms before a handshake.

Reports say fathers bless their daughters on the wedding day by spitting on the bride’s forehead.

You can just imagine the quantum of spit from family and friends an innocent baby would have to be soaked in by the time they are done visiting.

Also, in this era of the COVID-19 pandemic, it is far from clear how the people of the Maasai tribe are coping because if they should continue spitting on babies and doing the same in other activities, then the disease might spread faster in their locations than others.