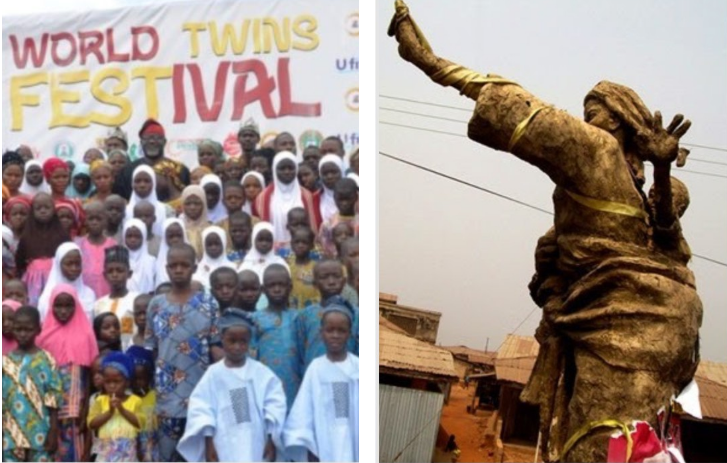 It will interest you to know that there is a particular town in Nigeria where every household gas a twin. It is a thing of joy as many families always look forward to having twins regarding the belief that they are special blessings from God.

It’s a curious, but little-known fact that the rate of twin births in West Africa is about four times higher than in the rest of the world. The centre of this twin zone is Igbo Ora, a sleepy southwest town in Oyo State.

The town is dubbed the “Twin Capital of the world”. Igbo Ora is a town and the headquarters of Ibarapa Central, Oyo State situated 80 kilometres North of Lagos. The rate of their population keeps multiplying due to the high rate of birth twins in the town.

In 2006 the population of the town was approximately 72,207 people. In 2017 the population is estimated to be around 198,514 people which over doubles the previous population.

In Igbo-Ora, research has suggested that the multiple births could be related to the eating habits of the women in the region. Though no direct relation between dietary intake and twin births has been proved, a research study carried out at the University of Lagos Teaching Hospital has suggested that a chemical found in Igbo-Ora women and the peelings of a widely consumed tubers of yam could be responsible.

There is of course the possible explanation that the large number of twins being born there could simply be a matter of genetics.

“More twins are born here than anywhere else on earth, but nobody is quite sure why this town should be more twin prone than any other,” Outlook reports from the ‘twin town’ with a difference.

Entering Igbo Ora town, you need no soothsayer to tell you it is a town of twins, placed at the entrance is a notification which welcomes visitors and reads thus, welcome to Igbo Ora, the Land of twins”.

READ ALSO: Stunning Reasons Why In Maasai Tribe, Visitors, Friends And Family Must Spit On A Newborn Child 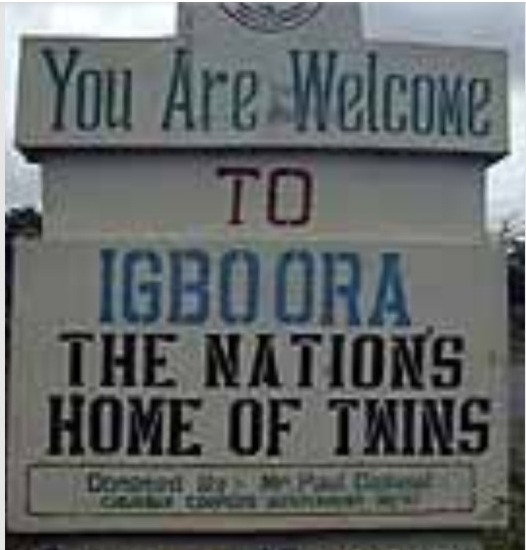 Nigeria is the most highly populated nation in the world with an estimated of over 100 million people and population experts say that the country, particularly the southwest, has the world’s highest twinning rate, according to reports from BBC and Vanguard.

In the predominantly rural community of Igbo Ora, multiple births are celebrated and have, over the generations, been regarded as special gifts from God. Twins are a blessing, with many pregnant women wishing for multiple births.

SEE ALSO: Barbaric: Why Young Girls Of The Mursi Tribe Must Remove Their Teeth & Stretch Their Lips Before They Marry

Igbo Ora is not a wealthy town, many families rely on farming for their income and resources are scarce. Bringing up large numbers of children can be a struggle, but in many families, the arrival of twins continues to be warmly welcomed as one townsman explains:

”Being a father of twins is a joy. It is a sort of honour, because you know they are a special breed from God.”

The historical town of Igbo Ora is always coming alive when people from all walks of life converged in the ancient community to celebrate the yearly Igbo-Ora World Twins Festival.

Reputed to be the most prominent among of places with multiple births, with a record of twins or triplets in virtually every household in the community, the festival, which was put together by Twins World Creations in conjunction with the Igbo-Ora community foundation is always organised to showcase the tourism and cultural potentials of the community, as well as attracts investors into the state and help get the town into Guinness Book of Record.

The highpoint of the yearly event has always been the presence of the grand patron of the festival, Alaafin of Oyo, Oba Dr. Lamidi Olayiwola Adeyemi 111, many other first-class monarchs and other prominent personalities.

It has now become a tourism event in the whole of Ibarapa land. The twins festival is often used to boost the economy of Nigeria through twins tourism.

The festival, which started 10 years ago as Naija Twins Festival, was repackaged a few years back for global participation hence World Twins Festival is designed to position Oyo State as the foremost twins’ tourism destination in the world.

In Igbo-Ora, nearly every household has a history of giving birth to twins or other multiples, people attributed the predominance of twins in Igbo-Ora to a meal, Amala and Ilasa, morsel meals that combine yam powder (agida) and Okra Leave Soup, yams contain gonadotrophins, a chemical that helps women produce multiple eggs.