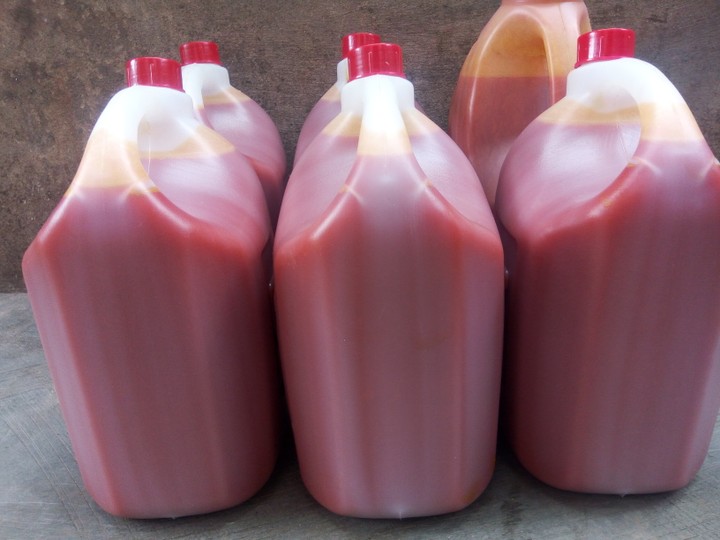 Palm oil, an edible oil and an important ingredient in the diets of many Nigerians, is obtained from the fleshy mesocarp of the fruit of the oil palm, and it is grown commercially in Africa, South America, Southeast Asia, and the South Pacific, and on a small scale in other tropical areas.

Despite being commonly used, experts say that a large quantity of palm oil being sold in the open market is adulterated, poorly stored, and likely to result in grave health consequences if eaten.

As security agents arrest some persons suspected of adulterating palm oil, PUNCH reports how criminals have made the popular cooking oil a health menace for unsuspecting members of the public

With the collaboration of Economic and Financial Crimes Commission Gombe Zonal office, 26 people were arrested and handed over to the National Agency for Food and Drug Administration and Control for prosecution.

One of the suspects, Theophilus Sam, told newsmen that he had also been consuming the oil for the past eight years and that, so far, he has not experienced any negative effects from it.

Why we add colour to palm oil —Suspect

“We were caught at the shop as we were turning oil. We were accused of putting colour into our oil.

“I have to say the truth: there is something reddish we put into our oil just to make it red, but it is not in all oil that we put it. In fact that is the same oil we consume at home.

A Fellow of African Science Literacy Network and a Senior Lecturer in the Department of Chemistry at the University of Lagos, Dr. Temilola Oluseyi, said the quality of palm oil is influenced by the method of processing.

Oluseyi, who is an expert in analytical chemistry and environmental health, said the scale of operations differs from the level of processing and that this affects the quality of the final product.

“It has been shown that the free fatty acid content of palm oil is determined by two factors. The first and major factor is the length of storage of the fruits used to process the palm oil.

“The second factor is the length of storage of the oil after processing. Oil processed from the fresh fruits has very low initial free fatty acid [FFA] content, compared with those from fruits that had been stored for several days or weeks.

“Results from previous researches have also shown that the high quality palm oils, that is those with very low FFA content, contain microbes and they eventually lose their quality with increase in the microbial load as the length of storage of the palm oil increases.”

Oluseyi said the chemical and physical properties of palm oil are determined by these free fatty acid contents.

“The free fatty acid of palm oil has an even balance of saturated and unsaturated portions and this confers some stability against oxidation to the oil as compared to other vegetable oils,”

She said the quality of palm oil is determined by many factors such as weather, soil, harvesting condition, storage and process of extraction.

“Unfortunately, palm oil is subject to deterioration, the consequence of which is harmful to health,” lamenting that “The quality of palm oil sold in many Nigerian markets has been a source of concern for many years.”

Experts say there had been speculations that the potential harmful effects of unrefined traditionally processed palm oil could outweigh its nutritional benefits since the oil could contain some components that enhance numerous reactions involved in the degradation of the product.

“Microbial contamination may occur during handling, leading to changes in the quality and chemical composition,” Oluseyi warned.

Oluseyi further revealed that merchants in palm oil business store their products for a very long time as they await rise in prices, noting that under such circumstances, nutritional values may be lost. She said,

“The high nutritional value, especially its high oil content, greatly predisposes it to deterioration. The quality of palm fruits, processing techniques, handling and storage are critical points to be considered in the production of quality palm oil.

“This is in a bid to minimise the mould load, free fatty acids, aflatoxin B1 contents, moisture content and other anti-nutritional and deteriorating factors as their presence, especially in high values exceeding permissible levels, reduces quality which are undesirable and hazardous to health of consumers.

“Moulds are known to cause biochemical deterioration of infected oils, resulting in poor quality of such oils. Apart from moulds capable of digesting and exhausting nutrient content of crops, more to be feared is the added danger of aflatoxin production in the oils,”

QUALITY OF PALM OIL IS DETERMINED BY MANY FACTORS SUCH AS WEATHER, SOIL, HARVESTING CONDITION, STORAGE AND PROCESS OF EXTRACTION –EXPERT

Experts say aflatoxins are highly undesirable in palm oil as they are very toxic and therefore dangerous to health.

According to Bedima, for palm oil to be considered safe, it must be registered with NAFDAC. He said,

“It should have NAFDAC registration number and it should also have the address of manufacturer, rather than the Post Office Box number, so that we can locate where the palm oil is being manufactured, as well as a batch number, this simply means in a production circle.

All these are for the purpose of traceability, in case something happens. Most of the palm oil you get in the open market are unregistered, but in the supermarkets you are likely to run into some registered palm oil.

NAFDAC is intervening because it is food, and because it is protecting public health. The way palm oil is packaged is likely to determine the quality,”

Bedima said odour is a major thing to watch out for, adding that laboratory testing is a sure means of knowing safe or unsafe palm oil.

“Consumers should watch out for colour, odour and, possibly, taste. The colour of Palm oil is very dicey, if you are using colour to judge, you will run into trouble. You may see a perfect looking palm oil but with an additive dangerous to the human health.

“Though I’m yet to confirm this, I heard that the hybrid palm oil tree grown in the South does not give red oil. If that is true, then we have a problem because they said it is not actually red but up North, palm oil is known as red oil.

“If you bring colour that is not red into the North, people may think it is not palm oil. So, the people who use hybrid trees are likely to add colorants.

“Of course, there are approved colours for palm oil, such as carotene, but some consider it expensive. So, they want to use very cheap colorants like Sudan 1,2, 3, which is meant for leather companies as dye but people add it into palm oil to give it red colour.

“You may only know if you are a frequent user of palm oil, and you know the physical characteristics, that is why the laboratory is our saviour in this matter,”

‘Trucks To Pay N500; Cars, SUVs To Pay…’ -10 Highlights Of The New Road Tolling Policy You Should See

The NAFDAC official said, based on laboratory investigation, the arrested suspects used various substances which include Sudan 1-2-3 to boost the quantity of their products.

“The products handed over to us, we had to take them to laboratory, from the result obtained from the products, a good number of them were adulterated.

“Some were adulterated with Akamu (pap), as findings show a lot of starch in them. Some contained the harmful Sudan 1,2,3, which are carcinogenic substances,”

COLORANTS SUCH AS SUDAN 1,2, 3 ARE MEANT FOR USE IN LEATHER COMPANIES, BUT PEOPLE ADD IT TO PALM OIL TO GIVE IT RED COLOUR –NAFDAC

“There are times that market tends to be fast and people buy oil; and some other times, consumers have enough. Sometimes, one can sell a drum under one week, or within a month.”

He, however, urged the government to ban Indonesia from bringing palm oil into Nigeria, saying the imported oil “is not as good as what we have in Nigeria.”

Role of National Institute for Oil and Palm Research

Principal Research Officer at the Soils and Land Management Division of the National Institute for Oil and Palm Research, Mrs. Marian Ekebafe, says NIFOR does not carry out regulation on oil palm produce as a focal focus, adding that the agency is concerned about indiscriminate sale of palm oil.

“We carry out research on five mandate crop, out of which oil palm is one of them. So, consumer protection agency and NAFDAC are the best bodies to regulate adulterated palm oil.

“Oil palm is one common oil that people sell indiscriminately without passing the necessary agency for validation. The only way out is to buy validated and branded palm oil from registered companies,”

On his part, Gombe State Coordinator of the Standard Organisation of Nigeria, Umar Yakubu, said SON will not fail to respond using relevant laws to prevent adulteration.

“If we get distress call on any product, we swing into action wherever they are. We will pick samples test and prosecute if necessary,”

Oluseyi advised that there is need for the government to enforce quality control assurance procedures wherever palm oil is being processed for commercial purposes.

“The government should also create a scheme that tests and confirms the benchmark of the palm oil before their sale in market;” she said, adding, “Since most of the locally produced and unbranded palm oils have poor quality below the required benchmark, modern methods of processing of palm oil should be embraced by the local community, and this can be achieved through the setting up of oil mills that are equipped with modern facilities.”