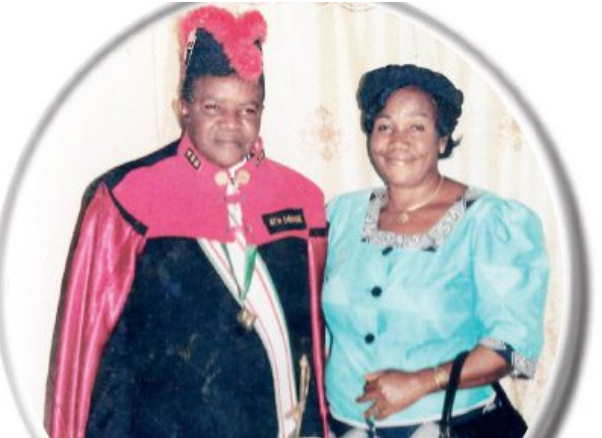 Sir Hyacinth Nwabueze and his wife, Lady Alice, hail from Obodoukwu in Ideato North Local Government Area of Imo State. The couple, both into business got married in their youth, precisely at 25 and 20, respectively.

In a chat with DailySun, in Port Harcourt, the lovebirds share how love and mutual respect for each other sustain their marriage, which is today blessed with six children: four boys and two girls.

From their 45 years experience in marriage, the couple also counselled newly married and intending couples.

Could you tell us how you met before you got married?

Along the line, my younger brother took me to their family house.  I picked interest in marrying her. We started the processes of traditional marriage rites.  After the traditional marriage, we planned for white wedding which took place on December 27,  1974.  A ll along, we have been living peacefully.

Wife: We met for the first time at a funeral ceremony in the village.  That was where two of us met.

Was there any opposition from relatives and friends concerning your marriage?

Wife:  There was no objection at all from anywhere. Everybody supported the marriage.

What made you decide to go for your wife out of the many ladies available for a pick within that period?

Husband: She must be lucky because my earlier plan was to become a Catholic priest. During my earlier time, if young teenage girls saw me and wanted to find my trouble, they would group themselves together and try to make me laugh.

Once I laughed, they would feel happy they had succeeded in making me laugh. Before I got married, it was very difficult to see me discuss with a girl. I always stayed away from girls. That was why I said my wife was a lucky woman that time.

What qualities made you choose him above other eligible suitors within that period?

Wife: I loved his spiritual life and he was very humble.

How did you propose to her? What did you say to her as to make her accept to marry you?

Wife:  I replied yes, without thinking otherwise. I said yes to him.

Husband: Our marriage that time was the best so far in my community.  Our wedding attracted so many people. People were surprised that I married and wedded in Catholic Church at a prime age.  It was the talk of the town.  They were surprised because I married at the age of 25.

Wife: It was the best at that time and a lot of people attended our wedding.

Husband: My first misunderstanding with my wife was an incident that happened. Some people picked my wife and carried her away. They collected all that she had including a huge amount of money.

If I were not the type of man that does not put his mind on earthly things, that would have been the end of the marriage. When my in-law got the information, he said that, if it were him, he wouldn’t take it. But I hugged my wife. I forgave and embraced her.

Wife:  It was when people stole my money and my husband stood by me.

Husband: My wife does not eat much. Her favourite meal is meat.

Husband: What I like most about my wife is once she offends me and I tell her, her fault, she takes correction immediately. She cannot repeat the same thing again. She would try to improve on that area so that it does not happen again.

Wife:  My lovely husband is humble and God-fearing.

READ ALSO: Living With Habits You Can’t Change In Marriage? See The Onyenwekes Found A Way Around Theirs

Husband: Really, nobody is perfect. We are all bound to make mistakes at one point or the other. I would want her to improve on her prayer life. She is weak in that area. But, my joy now is she is now picking up. Our morning devotion starts 4:30 am;  she can now start the devotion before I join them. It gives me joy. It wasn’t like that before.

Wife: To be frank, he is special in all ways, but he needs to be more sociable.

Husband: The advice I would like to give young bachelors intending to go into marriage, is first, you are approaching the stage people would see you and they say you are mature. You should realise that in Igbo culture, for instance, once you are married, you have become a man.

Meaning that, there are some certain things –character and behaviour –people expect you to exhibit. There is special regard people have for married men. So, you must realise it. Whatever you may be tomorrow as a married man, the intending husband must bear in mind that you are regarded by how you present yourself as a married man.

If you fail to realise where you are going, it shows that you are not prepared for marriage. Most especially, you must be prayerful. The greatest mistake a man would make in marriage is when he fails to marry his own wife. That marriage will not last no matter how you manage it.

READ ALSO: Experts List 9 Phrases Couples In Happy Relationships Should Never Pull Out In A Marriage

In light of rampant divorce cases these days, from your own personal experience, what piece of advice would you want to give newly married couples on how to make their marriage last as long as your own has lasted?

Husband: Married life is not what you play along. Every young couple should realise that it has a new status. Both the bride and groom, their statuses have changed. They must know this. See me talking to you, from the time we wedded till now, my marriage is getting to 45 years, I have never laid my hand on my wife’s cheek, let alone beat her.

What I have kept secret and I continue to pray over it is, God to help me. The day I would celebrate my golden jubilee, I will tell people that this hand has never been lifted against my wife. Since we got married, there is nothing my wife and I discussed that you hear outside.

This should be an eye-opener to the younger couples. You must be open to one another. Trust each other. No matter the situation, don’t let a third party––no matter who the person is, no matter how the problem is––enter your marriage.

Two of you must know that marriage is not an easy thing. It is a load.  You should know that nobody would carry it for you. Both of you must join hands together to carry it. Always ask God to give you the courage to move along and He will help you. Make God your companion.

Wife: They should have a positive sight going into marriage and be a backbone to each other. Newly married couples should not bring in a third party into their marriage. They should see themselves as one.