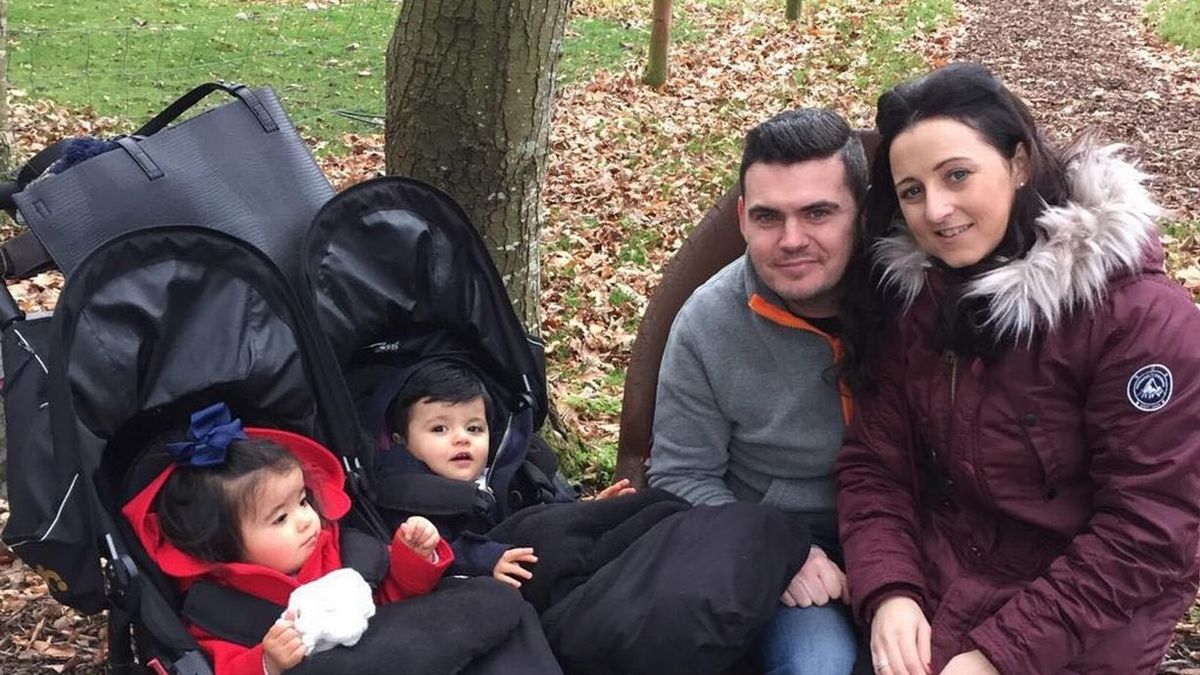 A woman endured 11 miscarriages before finally giving birth to twins. Karen Ashbrook and her husband Wayne were determined to have children, despite suffering 11 miscarriages and numerous failed surrogacy attempts that ended up costing the Dublin couple tens of thousands of euros.

Karen and Wayne met when they were 26 and immediately starting trying for a baby. Following a year without success, they went to their GP, which proved the starting point of a long and emotionally painful nine-year journey.

The first two rounds of IVF failed, but on the third round, Karen fell pregnant.

“It was the first time I’d ever gotten pregnant. I always remember it, we had taken the test on Mother’s Day so we thought it was meant to be.”

Only a matter of weeks later Karen started suffering extreme pain. She initially brushed it off as normal pregnancy woes before having to be brought to hospital when she collapsed at work.

There, doctors discovered it was ruptured heterotopic pregnancy, a rare complication.

“We were pregnant with twins, one in the womb but one was in my fallopian tube,”

“My tube had ruptured and I was lucky I didn’t die.

“I was rushed to theatre immediately, and my tube had to be removed and we also lost the twin in the womb.”

It was a devastating blow for the couple, but they were determined to carry on and did two more cycles, both of which failed.

“At this stage, we were thinking there is something not right, between not being able to get pregnant, then failed IVFs and losing the twins,”

The couple then began the lengthy and expensive process of testing, from immune issues to genetics with a new fertility clinic in a bid for an answer.

All the results came back clear until they tried the Chicago Bloods test. That test told doctors that Karen’s body was fighting the embryo. The clinic urged the couple not to worry and that they could prescribe Karen drugs to suppress her immune system so she could hold onto a pregnancy.

“We fell pregnant the first round with the clinic but lost the baby again and it just carried on,”

“Every time we would get a positive we would only get as far as the first scan around six or seven weeks to be told it wasn’t viable, my body was attacking the pregnancy.”

Before their success they tried over and over again to take a pregnancy to term. At this point Karen was on the highest dose of drugs doctors would prescribe. She continued:

“I was taking up to eight steroids a day. I was taking intralipids which is like chemotherapy, you are sat down with a drip for three or four hours.

That is about €2,000 a shot. I was having to do this before a transfer and afterwards in a bid to try and suppress my immune system and we did all of that, only to get pregnant and by six or seven weeks that would be the end of it once again.

Karen found herself particularly annoyed by one piece of advice people kept giving her.

“If I hear that line, relax and it will happen, one more time. You will never relax until you have a baby.

On the couple’s fourth cycle, disaster struck once again. Karen was pregnant and this time her bloods were progressing as they should. However, when her first scan came around doctors told her there was no pregnancy in the womb and that she was miscarrying.

When tests showed her hormone levels were still rising, Karen voiced concern she was having another heterotopic pregnancy, however, doctors dismissed her fears, insisting her tubes were clear.

However, Karen stuck with her instincts, packed a bag and presented at the maternity hospital and refused to leave.

“I kicked up such a fuss that they admitted me,”

“The next morning the consultant came to see me and said, ‘you were dead right, it is in your tube’.”

Again Karen had to be rushed for surgery and doctors and to remove her only remaining tube.

“It was devastating. I was just 32 and now permanently infertile and I would now never get pregnant without IVF.”

The couple began treatment with a clinic in Spain, but again Karen would fall pregnant and miscarry by seven weeks. The setbacks continued despite painful and expensive treatment with a Harley Street specialist and even when she tried donor eggs to increase her chances.

The financial burden on Karen and Wayne has been significant.

“You’re talking four or five thousand a go, with IVF, and that is without the medication and everything else on top of it,” she continued.

“And there is no support in place for that in Ireland, the government needs to step in and do something about it”.

In the background the couple had also started the adoption process. After finally being told they were eligible during their IVF journey, the couple was told there were no children to adopt.

Following a failed attempt in Spain Karen and Wayne began to explore surrogacy. They chose a clinic in India, but their first cycle failed.

A second attempt ending with a miscarriage at 12 weeks, despite the couple opting for a donor egg.

“It was devastating, we thought when we’d heard a heartbeat at seven weeks that was it, because we’d never got to that point before”,

The couple tried once again but another surrogate miscarried at seven weeks.

“That was it, three failed rounds of surrogacy and we just couldn’t figure out what was wrong,”

“Are we just not supposed to have children?

“We were nearly seven and a half years into it.

“Though out all this I was in work, I would get these calls, while in the office to say our surrogate had miscarried or the bloods weren’t looking good.

Nigerian Man, Ambrose Who Welcomed Twins With His Wife After 16 Years Of Waiting Shares Powerful Testimony

“And you have to deal with this, as well as deal with work, every single time, because no one knew. It was so hard.”

After deciding they would not try again, Karen and Wayne opted for one final go – this time with an Indian donor rather than a Caucasian one.

It worked, and after a brief scare when the clinic warned Karen the bloods had come back low, the good news started coming in waves.

“By the time they rang me back, 48 hours later, the bloods were through the roof, they were so high.

“They told me it was a sign of multiples.

In March, after eight years of trying for a baby, the couple were told their surrogate was expecting twins.

On the 12 October, following nine years of heartbreak, Karen and Wayne became parents to Isabel and Zach.

The couple flew to India the next morning and straight to their children to finally hold them in their arms.

“That time is a daze, I just couldn’t believe it”,

“It didn’t feel real until we got them home. I burst into tears when we hit the runway in Dublin because I felt like oh my god we’ve done this.

“We had three and a half weeks with the babies in India but I kept waiting for them to be taken away or for someone to say they aren’t yours and take them off me.”

Karen said they faced another terrifying two years once they got their children home due to Ireland’s laws around surrogacy.

Now she hopes that by shining a spotlight on it things may improve for the many Irish couples going down that route.

“We had to go to court to even get parental rights for our children, even though Wayne was their biological father”,

“We had to go through two years of court to get Wayne’s parental rights and then I had to be two years living with the babies before I could even go to court and apply for any parental rights.

“I had no rights to my babies for two years, which was very frightening after everything we’d gone through, to feel like someone could come and just take them.”

Karen and Wayne also had to go to court for the children to even be granted Irish citizenship and passports.

“Ireland is very backwards about this and I’m really hoping that with this increased awareness they can start to put better systems in place.”

Karen has urged other women struggling not to lose hope, but to advocate for themselves and demand answers.

“If you’re having miscarriages one after another, there’s a reason, it’s not just bad luck,”