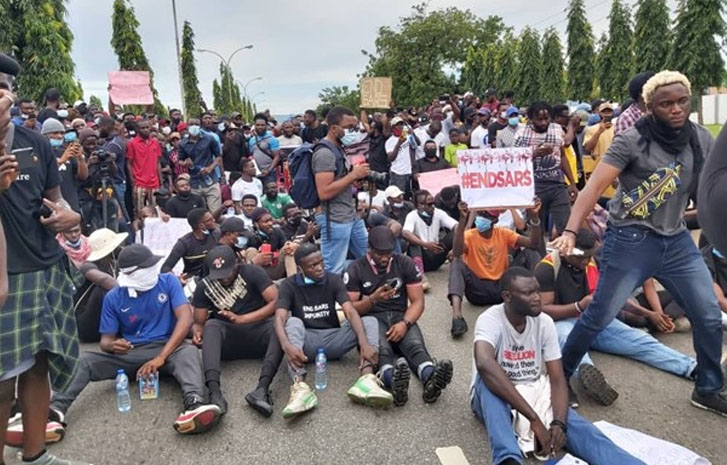 Human rights lawyer, Femi Falana (SAN) has revealed why the families of #EndSARS protesters who were brutally killed by soldiers at the Lekki toll gate are afraid to speak out.

According to the SAN, families of victims are scared to speak out because they “understand the environment under which we operate” in Nigeria.

At the virtual meeting monitored by The PUNCH, Falana urged Nigerians and the international community not to believe the explanations offered by the Nigerian Army on the Lekki shootings.

The Nigerian Army, after an initial denial, yesterday, admitted that its operatives were at the Lekki toll gate on Tuesday, October 20, 2020.

The military authorities also claimed they were invited by the Lagos State Government, noting that they acted within the rules of engagement.

The Senior Advocate of Nigeria, however, said the army has “a history of lies, fraud and deception” while making reference to the Shiites incident of December 2015.

“Nobody should believe the military because it has a history of lies, fraud and deception.

“Just in December 2015, the same Chief of Army Staff, General (Tukur) Buratai claimed that there was a traffic jam in Zaria and the big man wanted to move and because of that traffic, he got soldiers from the first division in Kaduna to mow down Shiites.

“And what was the explanation? That the Shiites wanted to assassinate the Chief of Army Staff…and about six or seven persons died.

“But in the Commission of Inquiry set up by the Kaduna State Government, we were told that indeed 347 Nigerians were killed by the military. No autopsy, no postmortem, nothing was done. Their bodies were taken away in the dead of the night and given a mass burial.

“And people will ask you, if anybody lost his child in Lekki, why have they not come up? Who has come up in the case of Zaria? Because you must understand the environment under which we operate.

“By the way, some of those injured in Lekki had to forcefully discharge themselves because they were told in the hospital that they were going to be held liable for the riot in town. And so, everybody had to move.

“But as of today, the governor of Lagos State has admitted that two people lost their lives. The circumstances would have to be explained later but those two were among those shot by the soldiers.”

Falana also stressed that the military has no business enforcing curfew under the Nigerian laws.

“We are involved in the investigation and we are going to unravel the entire mystery surrounding the attack in Lagos,”

Meanwhile, a former Presidential aide, Reno Omokri has alleged that some government officials have offered survivors of the Lekki shooting N5 million each as bribe to stay silent.

The Amazon Best Selling author made this claim in a tweet he posted on his verified Twitter page on Wednesday, October 28.

According to him, he spoke with some of the survivors who revealed to him that some government officials are offering them a 5 million Naira bribe each. He tweeted,

“#LekkiMassacre survivors told me that before they got into the safe house, they received calls from government officials offering them ₦5,000,000 each to walk away and forget the incident. How they got their numbers, they don’t know. They have details of these calls #EndSARS.”

#LekkiMassacre survivors told me that before they got into the safe house, they received calls from government officials offering them ₦5,000,000 each to walk away and forget the incident. How they got their numbers, they don’t know. They have details of these calls #EndSARS

The Lekki attack has been condemned by both local and global civil rights personalities and organisations including Amnesty International which claimed at least 10 protesters were killed by the Nigerian forces at the Lekki toll gate.