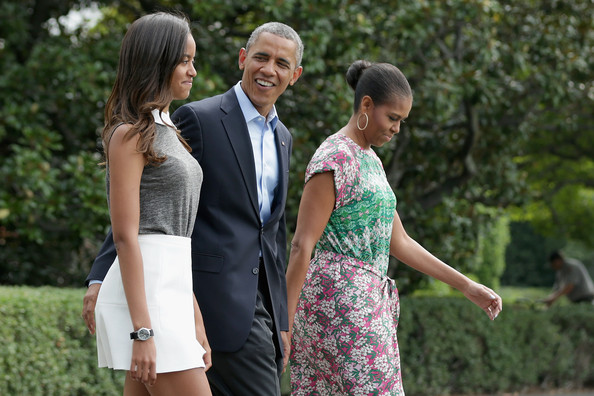 In the book, which hit shelves on Wednesday, November 17, Barack explained that he was able to focus on being a father while he was at home with Malia that summer after she was born, but once his paternity leave ended and he had to return to work at three jobs (not to mention plan his run for Congress in 2000), the politician couldn’t spend as much time with his family. Barack wrote:

“Michelle bore the brunt of all this, shuttling between mothering and work, unconvinced that she was doing either job well.

“At the end of each night, after feeding and bath time and story time and cleaning up the apartment and trying to keep track of whether she’d picked up the dry cleaning and making a note to herself to schedule an appointment with the pediatrician, she would often fall into an empty bed, knowing the whole cycle would start all over again in a few short hours while her husband was off doing ‘important things.’”

Barack revealed that his schedule caused riffs in his marriage with Michelle, who didn’t think it was fair that he was devoting so much time to his career.

“We began arguing more, usually late at night when the two of us were thoroughly drained. ‘This isn’t what I signed up for, Barack,’ Michelle said at one point. ‘I feel like I’m doing it all by myself,’”

Barack admits that wasn’t easy to hear from Michelle at a time when he felt like he was giving 400% and still falling short. But still, he knew that she was picking up his slack at home.

In his darkest moments, 59-year-old Barack considered ending everything. Their relationship took a turn for the better after Barack lost the Democratic primary race for Illinois’ 1st congressional district in 2000 and Barack realized how much his family meant to him.

READ ALSO: Barack Obama Reflects On His Experience Growing Up With An Absentee Father In Touching Instagram Post

He recalled the feeling when he was flying back on a plane after losing his congressional run. The devoted dad-of two further wrote:

“I was almost forty, broke, coming off a humiliating defeat and with my marriage strained. I felt for perhaps the first time in my life that I had taken a wrong turn.”

Of course, Barack’s story had many more twists and turns to go. But it’s clear that he still remembers acutely the feeling of letting his partner down, and that, for all the triumphs of his presidency, a small part of him will always wonder what it would have been like to devote his life wholly to his family.