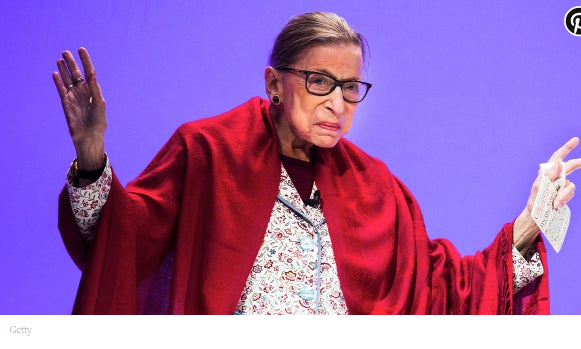 Justice Ruth Bader Ginsburg passed away at the age of 87 due to metastatic pancreatic cancer on September 18.

Ginsburg, only the second woman on the Supreme Court and appointed in 1993, is considered a titan for her fight for equality and women’s rights through her landmark Supreme Court rulings.

But for the power woman, equality was not something that simply happened in the workplace.  She fought for it and lived it in every aspect of her life. And for her, a marriage of equality was deeply important.

In her 56-year marriage to her late husband Martin Ginsburg, who died in 2010, Ginsburg lived a life of deep happiness, and most importantly, equality in partnership.

Below are six quotes that reveal how Ginsburg felt about her marriage to her husband.

On How to Have A Happy Marriage

“On the day I was married, my mother in law… took me aside and said she wanted to tell me what was the secret of a happy marriage,” said Ginsburg.

That secret? “‘Every now and then it helps to be a little deaf [in marriage and in] every workplace,’ including the good job I have now… That advice has stood me in good stead. Not simply in dealing with my marriage, but in dealing with my colleagues.”

“If you have a caring life partner, you help the other person when that person needs it. I had a life partner who thought my work was as important as his, and I think that made all the difference for me.”

One night, Ginsburg had stayed up all night working on legal briefs and received a call from her son’s school. Her response? “This child has two parents. Please alternate calls. It’s his father’s turn.”

Businessman, Wale Jana Shares Profound Thoughts On Why It’s Dangerous For Married People To Cheat On Their Spouses

“Women will have achieved true equality when men share with them the responsibility of bringing up the next generation.”

On Respecting Their Wit

“Marty was an extraordinary person. Of all the boys I had dated, he was the only one who really cared that I had a brain. And he was always, well, making me feel that I was better than I thought I was.”

On Equality In And Outside of the Home

“I have had the great good fortune to share life with a partner truly extraordinary for his generation, a man who believed at age 18 when we met, and who believes today, that a woman’s work, whether at home or on the job, is as important as a man’s.”